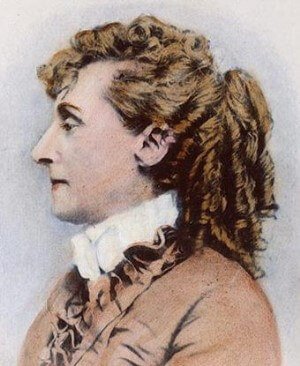 The Union Army employed several other methods of gathering information about the South during the Civil War, but agents in the field – men and women – were the major source of espionage and intelligence gathering activities. Many agents operated under several different names. Due to the clandestine nature of their work, records were poorly kept or intentionally destroyed and the identity of most of these operatives will never be known.

Pinkerton’s Women Agents
A former sheriff and native of Scotland, Allan Pinkerton had established a detective agency in Chicago in 1850. Pinkerton gained fame early on by foiling a plot to assassinate President Abraham Lincoln in 1861. Shortly after the first battle of Bull Run, Pinkerton came East from Chicago, bringing his entire force with him and began to investigate people suspected of assisting the Confederate cause.

He made several important arrests, both in Washington and in Baltimore, acting under orders from Provost-Marshal Andrew Porter, as well as General McClellan and the heads of the Department of State and War. Several of his best operatives, both men and women, were constantly traveling between Richmond and Washington, bringing valuable information and the plans of President Davis.

Neither Pinkerton nor his agents had any training in intelligence gathering and were notorious for their over-estimation of Confederate troop strength. During the Peninsula Campaign over the spring and summer of 1862, General George B. McClellan advanced his army of 108,000 men to within sight of the church spires of Richmond, Virginia. However, intelligence gathered by Pinkerton suggested an opposing Confederate force nearing 200,000 who were well fortified.

In fact, General Robert E. Lee never had more than 85,000 men under his command during this time, as his smaller force drove the Federal horde before him in full retreat. Pinkerton’s unintended misinformation served the defense of Richmond well – it would be some two and a half years before the U.S. Army would get that close to the Confederate capital city again.

Pauline Cushman
Although she was born in New Orleans, Pauline Cushman spent most of her childhood in the North, and she was devoted to the Union. The Federal Government employed her to ferret out Southern sympathizers and spies in Louisville, Kentucky, and then to discover how they conveyed information to Confederate officials. She performed the same duties in Nashville, Tennessee. 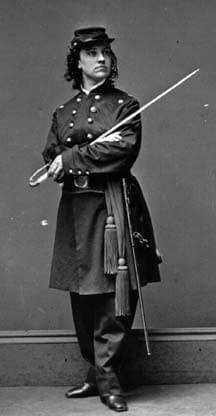 In May 1863, as General William Rosecrans was preparing to attack CSA General Braxton Bragg, Cushman crossed enemy lines to ascertain the strength and location of the Confederate Army. Rebels captured Cushman and sentenced her to hang, but as they expected a major assault from Rosecrans, they made a hasty retreat, leaving Cushman behind. She escaped and soon returned to Union lines.

Cushman’s life after the war was filled with tragedy and heartache. She had lost both her children by 1868. She married a second time in 1872, but her husband died within a year. In 1879 she married Jere Fryer and moved to Casa Grande, Arizona Territory, where she ran a hotel and livery stable. The couple separated in 1890, and by 1892 Cushman was living in poverty in El Paso, Texas. She applied for and received a government pension based on her first husband’s military service in June 1893.

Pauline Cushman spent her last days in a San Francisco boarding house, working as a seamstress and charwoman. She suffered severely from rheumatism and arthritis and became hooked on pain medication. In December 1893 she died from an overdose of opium.

Hattie Lawton
In 1860 Allan Pinkerton created the Female Detective Bureau, and though his sons tried to disband the fledgling organization, the lady detectives proved their worth and thrived, particularly during the Civil War. The first female agents employed by Pinkerton were an attractive 23-year-old widow named Kate Warne and the exceptionally beautiful Hattie Lawton, also a widow. Female Detectives could gather information that the male Detectives could not. Lawton was also known as Hattie H. Lawton and Hattie Lewis Lawton.

In April 1861, field headquarters for the Pinkerton Agency were set up in downtown Cincinnati, where General George B. McClellan was taking command of the Department of the Ohio. Pinkerton immediately summoned some of the Agency’s most experienced operatives, including Kate Warne, Hattie Lawton, George Bangs and Timothy Webster, who was to head the staff there. Pinkerton began his Secret Service work at the direction of McClellan, and Lawton was added to the payroll on August 8, 1861.

Pinkerton and his operatives soon moved their operations to Washington DC. As the war progressed, Lawton began posing as the wife of Pinkerton agent and spy Timothy Webster. In early 1862, they appeared as Mr. and Mrs. Webster in Richmond, Virginia to gather information about Confederate troop movements for Pinkerton. Lawton cared for Webster at the Monument Hotel when he fell ill with inflammatory rheumatism and could not continue to perform his duties. When Webster failed to send his usual reports back to Pinkerton, who soon became concerned.

Pinkerton sent agents Pryce Lewis and John Scully to discover what had happened to Lawton and Webster. A young man they had dealt with in a prior case recognized Lewis and Scully as Pinkerton agents, and they were taken into custody by Confederate authorities. Under intense questioning, to save his own life, the coward Scully revealed that Webster and Lawton were Union spies, and they were arrested as well.

Lawton and Webster were tried and convicted of espionage. Webster was sentenced to death. Lawton fully supported Webster while in prison. Because it was his wish, she pleaded with Confederate authorities to allow Webster to be shot, rather than to make him suffer a felon’s death by hanging. Her pleas were in vain; Webster was hanged on April 29, 1862. Pinkerton was devastated by Webster’s death; he wrote: “He was a faithful, brave, true-hearted man [for whom] fear was an element entirely unknown.” 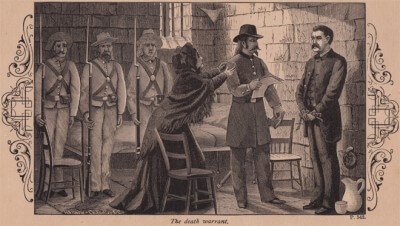 Hattie Lawton had been sentenced to one year in Castle Thunder Prison in Richmond; she maintained her cover as Timothy Webster’s widow during her incarceration. Richmond’s most accomplished Union spy, Elizabeth Van Lew, visited Lawton there. Lawton was one of four Federal prisoners exchanged for Confederate spy Belle Boyd on December 13, 1862. She reported back to Pinkerton and then simply disappeared.

Switching Sides
Mary Ann Pittman of Tennessee dressed like a Confederate Lieutenant named Rawley and joined the forces of General Nathan Forrest on his foray through Tennessee and Mississippi. She eventually revealed her gender to Forrest after which he laughed and said she made quite a good looking woman. He cautioned her to keep her secret and expressed his opinion that her “success would be more certain if she appeared as a woman dressed herself in a suit of female apparel.”

Under the name Mollie Hayes, Pittman spied and smuggled goods for the Confederacy and gained information about Union troops. Pittman often slipped through Union lines by pretending to be a loyal citizen who had information that she would impart only to the commanding officer. Once inside the lines, she had little trouble persuading younger staff officers to show her the defenses and positions of troops and fortifications.

Pittman later concluded that the Confederacy would likely lose the war. Wanting to be on the winning side, she allowed herself to be captured by General Lionel Booth’s Union troops. While at Fort Pillow, she informed Booth of Forrest’s pending attack with 4,000 men. The Acting Provost Marshal petitioned to use Pittman as a spy, stating, “she can be trusted and would be a proper person to send to [General Sterling] Price’s Camp.”

In January 1865, General Grenville Dodge provided Pittman with a pass through Federal lines, allowing her to begin her mission for the United States government.

Spying for the Union
By 1864 the use of women military operatives in the trans-Mississippi states and territories seems to have been common. Early in 1865 a woman named Nora Winder was reporting directly to General William Tecumseh Sherman on Confederate forces, positions, and troop movements. Women also smuggled weapons, drugs, and medicines, concealed in their luggage or on their person – sometimes secret messages were pinned in their hair or sewn into their clothing. Smugglers often doubled as couriers by carrying concealed military messages.

Provost Marshal records at the National Archives provide invaluable information about military intelligence during the Civil War. An interesting report by Isaac Boatman, Lieutenant of the 59th U.S. Colored Infantry in Memphis, Tennessee tells of his experiences with Detective Mrs. L. Pye:

I have the honor to state that on Saturday the 11th of March inst I was commanding detachment of Grand Guard on the Hernando Road and in charge of that part of the line. About 9 o’clock a.m. of that day, Mrs. L. Pye, female detective who is charged with examining the persons of ladies passing out on that road came to my headquarters and handed me her instructions to read which I did and then told her I was in command of the guard and held responsible for the line. She claimed the right to make arrests and use my guards as she saw proper stating in presence of soldiers and citizens that she ranked any officer who did duty on that road and would show me her authority but that she did not have it with her. …

During the Civil War, the Union and the Confederacy used the telegraph, the latest technological advancement, to send intelligence quickly over hundreds of miles of cable. However, anyone with a portable key set could tap into any line and listen to messages being tapped out. Confederate cavalry General John Hunt Morgan had the audacity to send a message to the U.S. Commissary Department over Union Army telegraph lines, complaining about the quality of the Union mules being captured by his men. 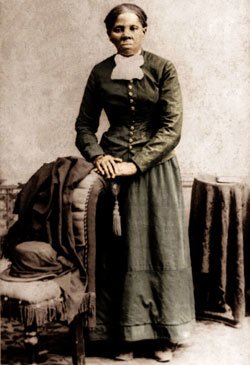 Image: Harriet Tubman
For all the work she did rescuing slaves from bondage, nursing sick and wounded soldiers and guiding the Union military on forays in the South, Harriet Tubman still found time to serve as a Union spy.

Women slaves might have provided the most useful military intelligence of the Civil War, relying on their masters’ belief that they were ignorant. Southern black women took an active role in assisting Union officers; they operated as spies, scouts, couriers and guides. The slave culture in the South allowed black women to move about freely in the performance of their duties without suspicion. Confederate officials and officers tended to ignore their presence when discussing the war.

SOURCES
Civil War, Espionage and Intelligence
The Secret Service of the Federal Armies
Civil War in the Ozarks: Union Records of Scouts and Spies