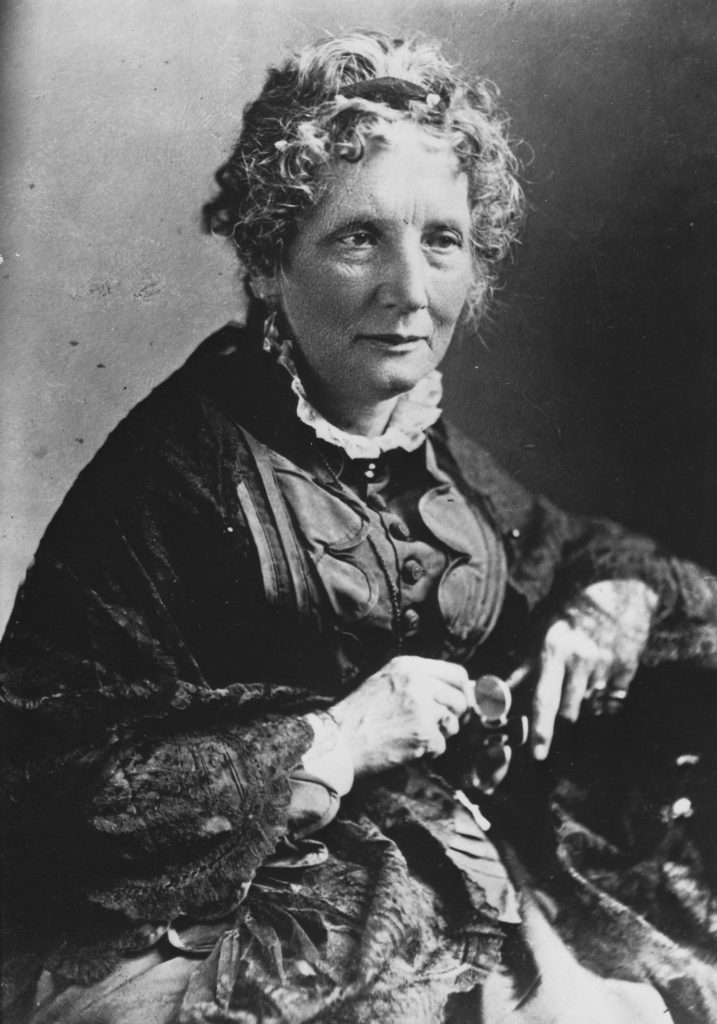 The Beechers took in boarders from Tapping Reeve’s law school. Lyman Beecher was a famous minister who guided the community with his powerful sermons and taught his children to be involved in the issues of the day. He also taught religion at Sarah Pierce‘s Litchfield Female Academy.

Harriet began her formal education at Pierce’s school, one of the earliest to encourage girls to study academic subjects. In 1824 Harriet moved to Hartford and became a student and later a teacher at the Hartford Female Seminary, founded by her sister Catherine Beecher. She remained there until 1831, honing her writing talents and spending hours composing essays.

Harriet’s passion for writing allowed her to express her thoughts and beliefs at a time when women could not speak publicly. It also enabled her to contribute financially to the income of the Stowe household. Her career began with a children’s textbook, Primary Geography for Children (1833) and A New England Sketch (1835), her first signed story and she received $50 for her effort.

Marriage and Family
In 1832, at age 21, Harriet Beecher moved with her family to Cincinnati, Ohio, where Lyman Beecher was appointed President of Lane Theological Seminary. There she was introduced to slavery debates, the Underground Railroad and fugitive slaves.

In January 1836 while still living in Ohio, Harriet married Calvin Stowe, a theology professor she described as “rich in Greek and Hebrew, Latin and Arabic, and alas! rich in nothing else…” They had seven children, six of whom were born in Cincinnati.

In the summer of 1849, Harriet Beecher Stowe experienced for the first time the sorrow many 19th-century parents knew when her 18-month old son Samuel died of cholera. She later credited that crushing pain as one of the inspirations for Uncle Tom’s Cabin: “It was at his dying bed and at his grave that I learned what a poor slave mother may feel when her child is torn from her.”

Uncle Tom’s Cabin
In 1850 Professor Calvin Stowe joined the faculty of his alma mater, Bowdoin College in Brunswick, Maine, where the family lived until 1853. The Fugitive Slave Law was passed in 1850, which punished anyone who offered food or temporary shelter to runaway slaves. Harriet believed her purpose in life was to write, and to expose the truth about the greatest social injustice of her day – human slavery.

Using the personal accounts of former slaves to write her blockbuster antislavery novel, Uncle Tom’s Cabin: or Life Among the Lowly. It first appeared in installments in the abolitionist newspaper The National Era between June 5, 1851 though April 1, 1852. It is the story of a Kentucky slave named Uncle Tom who is placed on a riverboat traveling down the Mississippi River to be sold. While on board, Tom meets and befriends a young white girl named Eva, whose father buys Tom and takes him with the family to New Orleans.

The novel also tells the true story of Eliza, a runaway slave mother who overhears that her five-year-old son Harry had been sold. Eliza clasps her son in her arms as she flees from the slave state of Kentucky to the free state of Ohio by jumping from ice floe to ice floe on the Ohio River. The character Eliza was inspired by an account given to Calvin Stowe at Lane Theological Seminary.

Stowe expected the story to be written in three or four installments; she wrote more than 40. The novel was then published as a two volume book in 1852, Uncle Tom’s Cabin was a best seller in the United States, Britian, Europe, Asia, and was translated into over 60 languages. The book received both high praise and harsh criticism and catapulted Stowe and the issue of slavery into the international spotlight.

Uncle Tom’s Cabin was certainly not the sole cause of the Civil War, but it stirred opinions held by people in the North and South that led to the War. Stowe later said:

I wrote what I did because as a woman, as a mother, I was oppressed and broken-hearted with the sorrows and injustice I saw, because as a Christian I felt the dishonor to Christianity – because as a lover of my county, I trembled at the coming day of wrath.

Uncle Tom’s Cabin brought financial security, and enabled Stowe to write full time. She began publishing multiple works per year including the Key to Uncle Tom’s Cabin, which documented the case histories on which she had based her novel, and Dred: A Tale from the Swamp, a more forceful anti-slavery novel.

In 1853 the Stowe family moved from Maine to Andover, Massachusetts, where Calvin served as professor of theology at the Andover Theological Seminary from 1853 to 1864. Harriet continued to write and work to improve society, contributing numerous articles, essays and short stories that were regularly published in newspapers and journals.

At age 18, the Stowes’ eldest son Henry, whom Harriet called “the lamb of my flock,” traveled with the family to Great Britain and Europe. In 1857 Henry, a student at Dartmouth College, drowned at age 19 while swimming with friends in the Connecticut River. Stowe’s grief at his death caused a personal crisis of faith and propelled her to write her novel, The Minister’s Wooing.

Nook Farm began in 1853 as a collaborative purchase between John Hooker – lawyer and husband
of Harriet’s younger half-sister Isabella Beecher Hooker and his brother-in-law, Francis Gillette (a Senator and abolitionist). Following the purchase, the land was subdivided and sold in pieces.

This idealistic, liberal circle was a tight one, and there were frequent impromptu social activities and intellectual discussions. The houses were irregularly spaced on one enormous estate, and winding among the trees were paths and shortcuts that the neighbors used without going to the street. Doors were unlocked, and residents of the farm walked in and out of each other’s houses without knocking.

Winter Home in Florida
After the Civil War, Harriet’s brother Charles Beecher opened a Florida school to teach emancipated African Americans, and he urged Harriet and Calvin Stowe to join him. The Stowes purchased a house and property in Mandarin, Florida on the St. John’s River, and began to travel south each winter.

Newly expanded railroads also made shipping citrus fruits north a potentially lucrative business, and Stowe purchased an orange grove which she hoped her son Frederick would manage. The relatively mild winters of northern Florida were a welcome respite from Hartford winters and the high costs of winter fuel.

Harriet Beecher Stowe loved Florida, comparing its soft climate to Italy, and she published Palmetto Leaves, describing the beauties and advantages of the state. Stowe and her family wintered in Mandarin for more than 15 years before Calvin’s health prohibited long travel.

During this same time, Harriet’s younger half-sister Isabella Beecher Hooker became a prominent activist for women’s suffrage. She organized the first convention in Connecticut to discuss women in government, and formed the Connecticut Woman Suffrage Association. In 1871, she organized a suffragist convention in Washington, DC. For seven years until its passage, she submitted to the Connecticut legislature a bill to guarantee women the same property rights as their husbands.

The Beecher-Tilton Scandal
In 1870 Elizabeth Tilton told her husband, newspaper editor and abolitionist Theodore Tilton, that she had been involved in an affair with Harriet’s brother Henry Ward Beecher, one of the most famous clergymen in America. The Reverend Beecher’s history was riddled with rumors of extramarital affairs that had begun circulating years earlier.

Woodhull was outraged at his hypocrisy, and published a story in her paper Woodhull and Claflin’s Weekly, stating that America’s most renowned clergyman was secretly practicing the free-love doctrines that he denounced. In a highly publicized scandal, Beecher was tried for the crime of adultery in 1875. He was eventually acquitted but his reputation suffered.

Tilton v. Beecher was one of the most famous scandals of the late 19th century. The trial began in January 1875, and ended in July when the jurors deliberated for six days but were unable to reach a verdict. Beecher then called for the Congregational church to hold a final hearing to exonerate him, which it did. The story created a national sensation for two years, and split the Beecher siblings; Harriet and others supported Henry, while Isabella publicly supported Woodhull.

Late Years
In 1870 the Stowes had been forced to sell Oakholm, their beloved home at Nook Farm in Hartford, because of the high maintenance costs. In 1873, they settled into a smaller Victorian Gothic cottage nearby on Hartford’s Forest Street, across the road from Mark Twain (Samuel Clemens) and his wife Olivia Clemens. Harriet lived out her years there.

Stowe published several books in the 1870s, including Woman in Sacred History; A Series of Sketches Drawn from Scriptural, Historical and Legendary Sources (1874), We and Our Neighbors; or, the Records of an Unfashionable Street (1875) and Poganuc People; Their Loves and Lives (1878), an autobiographical novel about her childhood in Litchfield, Connecticut.

Her childrens’ struggles with substance abuse made Stowe far more sympathetic to addiction than most people of her time. In 1870 her son Frederick, an alcoholic Civil War veteran, left for California and was never heard from again. In 1890, her daughter Georgiana May died at age 40 due to complications from morphine addiction. Stowe was one of the first to write about addiction as a physical disease rather than a moral failing.

Stowe lived to a ripe old age, which meant that most of her loved ones passed away before her. In 1878, her elder sister Catharine died. In 1886, she lost her husband. A year later, Henry Ward Beecher died of a cerebral hemorrhage.

Harriet Beecher Stowe died in her sleep at her home in Hartford on July 1, 1896 at age 85.

Once in an age God sends to some of us a friend who loves in us, not a false-imagining, an unreal character, but looking through the rubbish of our imperfections, loves in us the divine ideal of our nature – loves, not the [wo]man that we are, but the angel that we may be.