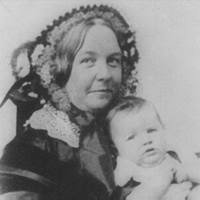 Elizabeth Cady Stanton (1815–1902) was a social reformer, editor, writer and leading figure in the early women’s rights movement. Her Declaration of Sentiments, calling for a full spectrum of rights for women, was presented at the first Women’s Rights Convention in 1848. For many years thereafter Stanton was the architect and author of the movement’s most important strategies and documents.

Elizabeth Cady was born on November 12, 1815, in Johnstown, New York. The daughter of a lawyer who made no secret of his preference for another son, she showed at an early age her desire to excel in intellectual and other ‘male’ spheres. Elizabeth was educated at Johnstown Academy, where she was the only girl in the higher classes studying Latin, Greek and mathematics.

Barred from obtaining a college degree because of her gender, she continued her studies at Emma Willard’s Troy Female Seminary, where she discovered natural rights philosophy. She studied law with her father, Judge Daniel Cady, but was not admitted to the New York Bar because women were excluded. Her legal and philosophical studies and her own experiences convinced her of the discriminatory nature of the laws regarding women, and she resolved to work for the reform of those laws.

Stanton had an early introduction to the reform movements – abolitionist, temperance and women’s rights – including encounters as a young woman with fugitive slaves at the home of her cousin, Gerrit Smith. It was at Smith’s home that she also met her husband Henry Stanton.

In 1840 Elizabeth Cady married Henry Stanton, a lawyer and abolitionist, (omitting ‘obey’ from the marriage vows). Soon after their marriage they went to the World’s Anti-Slavery Convention in London, where Henry was a delegate. There Elizabeth met Lucretia Mott, the liberal Quaker who served in many of the reform organizations with which Henry Stanton was associated. Because the women were denied seats at the convention, Mott discussed with Stanton the need for a convention on women’s rights.

Elizabeth and Henry had seven children. While Henry studied and practiced law for several years, the Stantons resided in Boston, where Elizabeth – surrounded by ‘enlightened’ friends and domestic servants – remained removed from most household duties.

In 1847, the Stantons moved to Seneca Falls, New York. Charged with putting their new home in order, Elizabeth found herself engulfed by the requirements of three small children and a large house. She soon became aware of the inequality of expectations that existed between men and women in 19th century America.

The plan for a convention on women’s rights that Stanton and Mott had discussed in 1840 came to fruition when Stanton again met Mott in the summer of 1848. After a month of missionary work on the Cattaraugus Reservation of the Seneca Nation, James and Lucretia Mott were attending the annual meeting of the Religious Society of Friends at Junius, near Seneca Falls, and staying at nearby Auburn with Mott’s sister, Martha Wright.

In just over a week’s time, Stanton, Mott and a few other women organized the Seneca Falls Convention in July 1848, initiating the women’s rights movement in the United States and Stanton’s role as a leader in that movement. Stanton wrote the Declaration of Sentiments in the style and format of the Declaration of Independence.

The history of mankind is a history of repeated injuries and usurpations on the part of man toward woman, having in direct object the establishment of an absolute tyrranny over her.
• He has never permitted her to exercise her inalienable right to the elective franchise.
• He has compelled her to submit to laws, in the formation of which she had no voice.
• He has made her, if married, in the eye of the law, civilly dead.
• He has taken from her all right in property, even to the wages she earns.
• He has so framed the laws of divorce, as to what shall be the proper causes of divorce, in case of separation, to whom the guardianship of the children shall be given; as to be wholly regardless of the happiness of the women…
• After depriving her of all rights as a married woman, if single and the owner of property, he has taxed her to support a government which recognizes her only when her property can be made profitable to it.
• He has monopolized nearly all the profitable employments, and from those she is permitted to follow, she receives but a scanty remuneration.
• He closes against her all the avenues to wealth and distinction, which he considers most honorable to himself.
• He has denied her the facilities for obtaining a thorough education – all colleges being closed against her.
• He has created a false public sentiment by giving to the world a different code of morals for men and women…
• He has usurped the prerogative of Jehovah himself, claiming it as his right to assign for her a sphere of action, when that belongs to her conscience and her God.
• He has endeavored, in every way that he could to destroy her confidence in her own powers, to lessen her self-respect, and to make her willing to lead a dependent and abject life.

Stanton and her cousin Elizabeth Smith Miller’s rebelled against women’s fashions of the day and began wearing loose fitting, short dresses over pantaloons, a style they imported from Europe. They introduced the outfit to Amelia Bloomer, who publicized it in her newspaper, The Lily, America’s first women’s newspaper, and bloomers were born. The design caused so much outrage and ridicule, Stanton eventually gave up wearing them, so as not to divert attention from her crusade for equality.

In 1851, Susan B. Anthony was staying at the home of fellow Temperance reformer Amelia Bloomer, while attending an anti-slavery meeting in Seneca Falls. Stanton encountered Bloomer and Anthony on the street. Immediately, Anthony and Stanton began their historic friendship.

As a part of her work on behalf of women’s rights, Stanton often traveled to give lectures, and called for an amendment to the U.S. Constitution giving women the right to vote. Her speeches became known throughout New England and the Middle Atlantic States. Henry Stanton was always supportive of his wife’s endeavors.

Stanton’s role was that of thinker and writer. She worked unremittingly for the women’s movement in all its phases. At the same time, she managed a household of seven children. Anthony often went to Stanton’s home and helped take care of these children in order to free her fellow activist for intellectual work. Unwilling to commit to a vigorous travel schedule until her children were a little older, many of Stanton’s speeches were delivered by Anthony.

During the Civil War Elizabeth Cady Stanton concentrated her efforts on abolishing slavery. After the war, however, it became clear that the 14th and 15th Amendments would grant full citizenship to African American males, but not to white women, Stanton and fellow activists broke with their abolitionist allies.

In 1868, Stanton worked with Anthony on The Revolution, a militant weekly paper, and along with Matilda Joslyn Gage, the two formed the National Woman Suffrage Association in 1869. Stanton was the NWSA’s first president – a position she held until 1890. For the next 20 years, the two women spoke to and inspired suffrage societies all over America.

Almost thirty years after the Seneca Falls Convention, Stanton and Gage wrote the Declaration of Rights of the Women of the United States. It reads in part:

While the Nation is buoyant with patriotism and all hearts are attuned to praise, it is with sorrow we come to strike the one discordant note on this hundredth anniversary of our country’s birth… May not our hearts, in unison with all, swell with pride at our great achievements as a people; our free speech, free press, free schools, free church and the rapid progress we have made in material wealth, trade, commerce and the inventive arts? And we do rejoice, in the success thus far, of our experiment of self-government.

Our faith is firm and unwavering in the broad principles of human rights, proclaimed in 1776, not only as abstract truths, but as the cornerstones of a republic. Yet, we cannot forget, even in this glad hour, that while all men of every race, and clime and condition, have been invested with the full rights of citizenship, under our hospitable flag, all women still suffer the degradation of disfranchisement.

On July 4, 1876, during the Centennial Celebration of the Declaration of Independence in Philadelphia, Susan B. Anthony read the Declaration of Rights of the Women of the United States from a podium in front of the Liberty Bell. The crowd cheered.

Stanton worked with Gage and Anthony on the first three volumes of A History of Woman Suffrage (1881–86), covering the period 1848 to 1877. In addition to chronicling the history of the movement, Stanton took on the role that religion played in the struggle for equal rights for women. She had long argued that the Bible and organized religion played a part in denying women their full rights.

Later in her career Stanton, like Gage, focused increasingly on social reforms related to women’s concerns other than suffrage, such as a woman’s right to higher education, to a professional life and to a legal identity that included the right to own property and to obtain a divorce.

The two worked together on Stanton’s Woman’s Bible, which was published in two volumes, the first of which appeared in 1895 and the second in 1898. This brought considerable protest not only from expected religious quarters but was rejected by many of the more conservative elements in the movement.

Though Gage split completely with Anthony over Anthony’s successful effort to merge the NWSA with a more conservative suffrage group to form the National American Woman Suffrage Association, Stanton agreed to serve as President of the combined organization for two years.

In 1892, at the age of 77, Stanton expressed her philosophy of the natural rights of women before the Committee of the Judiciary of the United States Congress:

The strongest reason for giving woman all the opportunities for higher education, for the full development of her faculties… complete emancipation from all forms of bondage, of custom, dependence, superstition; from all the crippling influences of fear, is the solitude and personal responsibility of her own individual life…

To guide our own craft, we must be captain, pilot, engineer; with chart and compass to stand at the wheel; to match the wind and waves and know when to take in the sail, and to read the signs in the firmament over all. It matters not whether the solitary voyager is man or woman.

At the end she often had her resolutions introduced by others, because her leadership was rejected by the newer forces, many of whom saw suffrage as a step toward the introduction of a conservative religious social agenda that Stanton strongly and openly opposed.

Like Anthony and Gage, Stanton did not live to see women’s suffrage in the United States. However, the words, that finally granted woman suffrage, found in the Nineteenth Amendment to the Constitution, were written by Stanton. 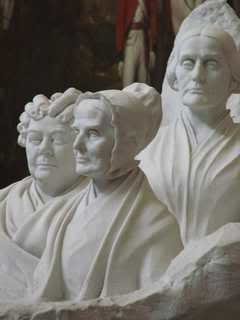 Image: Portrait Monument in the Capitol Rotunda
This memorial features portrait busts of the leaders of the woman suffrage movement (left to right): Elizabeth Cady Stanton, Lucretia Mott and Susan B. Anthony. It was presented to Congress by the National Woman’s Party as a gift to the nation on February, 15, 1921, and placed in the Rotunda Hall of the Capitol. After one day the statue was moved to the basement. Finally, after 76 years the monument was moved from the basement to the Rotunda of the United States Capitol over Mother’s Day weekend in May 1997.

More than any other woman in the movement, Elizabeth Cady Stanton was able and willing to speak out on a wide spectrum of issues. She was a major force in the drive toward equal rights for women in the United States and throughout the world, and deserves to be recognized as one of the most remarkable individuals in American history.