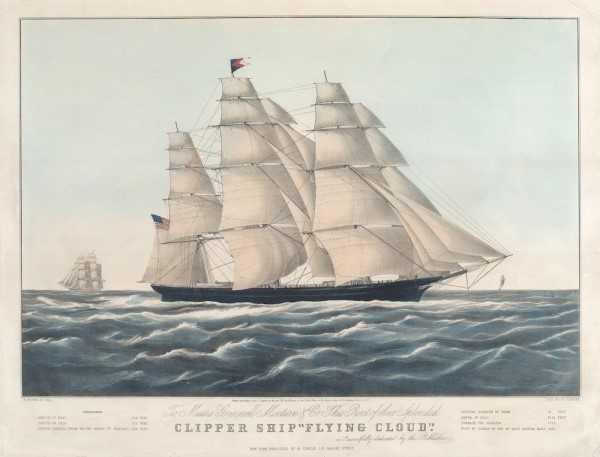 Gold Rush Clippers
A clipper was a very fast yacht-like vessel used in the middle third of the 19th century that had a large sail area – three masts and a square rig. Clippers sailed all over the world, primarily on the trade routes between the United Kingdom and its colonies in the east and in the trans-Atlantic trade. These ships also carried supplies on the New York-to-San Francisco route during the California Gold Rush (1848–1855), a journey of more than 16,000 mile that often took more than one hundred days. Fortunes were made or lost in clipper ships during the California Gold Rush.

Flying Cloud
Around 1846 Eleanor and Josiah Creesy began traveling on the clipper ship Oneida. They logged many thousands of miles on the ocean, traveling around the world carrying passengers and goods – with Josiah as captain and Eleanor as navigator. They had just returned from a trip to Shanghai, China in 1851 when they decided to sail from New York to San Francisco aboard the clipper Flying Cloud.

If great length [235 feet], sharpness of ends, with proportionate breadth [41 feet] and depth, conduce to speed, Flying Cloud must be uncommonly swift, for in all these she is great. Her length on the keel is 208 feet, on deck 225 [feet], and over all, from the knightheads to the taffrail, 235 [feet] – extreme breadth of beam 41 feet, depth of hold 21½, including 7 feet 8 inches height of between-decks, sea-rise at half floor 20 inches, rounding of sides 6 inches, and sheer about 3 feet.

Female Navigator
Part of Eleanor Creesy’s job was to find out how far the ship had traveled each day. This involved complex mathematical calculations which took several hours. The first time she completed her work, she could not believe the results. She did the mathematics again, carefully looking for errors. There were none. The ship had traveled almost 300 miles in 24 hours. Few ships had ever sailed this fast.

‘Round the Horn
From the 18th to the early 20th centuries, Cape Horn was part of the clipper routes which carried much of the world’s trade. Ships travelled between the east and west coasts of the United States via Cape Horn at the tip of South America, which exacted a heavy toll due to the extremely hazardous combination of weather conditions there. The only facilities in the vicinity able to service or supply a ship, or provide medical care, were in the Falkland Islands, and they were so notorious for price-gouging that damaged ships were sometimes abandoned there. 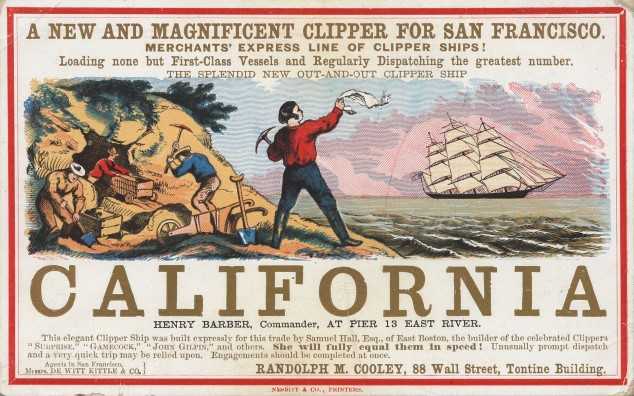 A NEW AND MAGNIFICENT CLIPPER FOR SAN FRANCISCO. MERCHANT’S EXPRESS LINE OF CLIPPER SHIPS! Loading none but First-Class Vessels and Regularly Dispatching the great number. THE SPLENDID NEW OUT-AND-OUT CLIPPER SHIP CALIFORNIA, HENRY BARBER, Commander, AT PIER 13 EAST RIVER This elegant Clipper Ship was built expressly for this trade by Samuel Hall, Esq., of East Boston, the builder of the celebrated Clippers “SURPRISE,” “GAMECOCK,” “JOHN GILPIS,” and others, She will fully equal them in speed! Unusually prompt dispatch and very quick trip may be relied upon. Engagements should be completed at once. Agents in San Francisco. Msmmrs, DE WITT KITTLE & CO. RANDOLPH M. COOLEY, 88 Wall Street, Tontine Building.

Setting the Record
Eleanor and Josiah Creesy planned a trip from New York to San Francisco to break the record while also racing serveral other ships. The old route lasted at least 100 days from New York, around Cape Horn at the tip of South America, and then on to San Francisco. The Creesys would sail the clipper ship Flying Cloud, which carried $50,000 worth of cargo – precious supplies bound for the goldfields of California.

Before and during the voyage, Eleanor Creesy studied the detailed guide Sailing Directions as well as the Wind and Current Charts published from 1847 until 1861 by Lt. Matthew Fontaine Maury, superintendent of the U.S. Naval Observatory and founder of the science of oceanography. She had been studying oceanic currents, weather phenomena, and astronomy since her childhood. She was among the first navigators to use the new route around Patagonia recommended in Maury’s Wind and Current Charts.

Flying Cloud left New York on June 2, 1851. Part of Eleanor Creesy’s job was to find out how far the ship had traveled each day. This involved complex mathematical calculations which took several hours. The first time she completed her work, she could not believe the results. She did the mathematics again, carefully looking for errors. There were none. The ship had traveled almost 300 miles in 24 hours. Few ships had ever sailed this fast.

On August 31, 1851 the clipper sailed into San Francisco Bay. Eleanor Creesy had navigated Flying Cloud to San Francisco in 89 days, 21 hours – breaking the previous record by more than 11 days. Newspapers across the country published the story of the historical voyage. Josiah and Eleanor Creesy were instant celebrities.

Breaking the Record
Two years later, in 1853, Josiah and Eleanor Creesy beat their own record by 13 hours – 89 days and 8 hours – a record that would stand until 1989 when the breakthrough-designed sailboat Thursday’s Child completed the passage in 80 days, 20 hours. The Daily Alta California wrote in an article documenting the event:

The clipper ship Flying Cloud arrived at San Francisco from New York, having accomplished the voyage in 89 days, 8 hours. This is the quickest passage recorded as having been made by a sailing vessel between the ports named. On a former occasion, Flying Cloud made the same voyage in 89 days, 21 hours. The story of Flying Cloud is exciting in itself, but equally intriguing is the fact that the navigator was a woman – the Captain’s wife, Eleanor Creesy. Remarkable for being a functioning female member of the clipper’s crew, she was also an inspired navigator. Her skills are considered to be a major factor in the ship’s safe and swift passages. A native of Marblehead, Mass., Mrs. Creesy learned navigation from her father, a successful captain in the coastal schooner trade. When she married Josiah Perkins Creesy in 1841, he was master of the Oneida, plying the China trade and wishing for a faster vessel. Eleanor sailed with him throughout his long career. 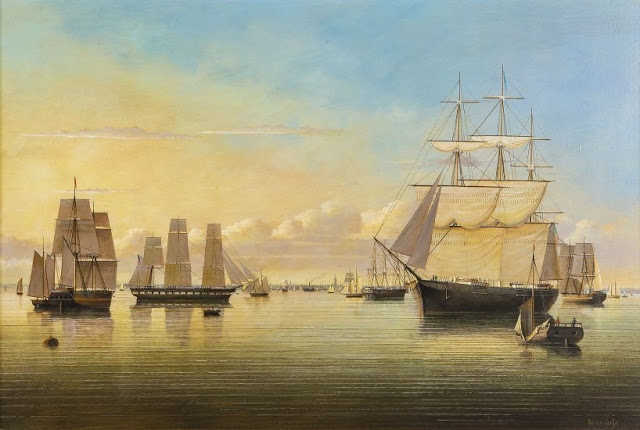 Late Years
Josiah and Eleanor Creesy sailed together on other ships out of Boston Harbor. After Josiah’s Civil War service ended in 1864, they retired to a farm near Salem, Massachusetts.

Eleanor was saddened to hear that Flying Cloud went ashore on the Beacon Island bar, Saint John, New Brunswick, Canada. On June 19, 1874, she was condemned and sold. The following June she was burned for the scrap metal value of her copper and iron fastenings.

Captain Josiah Creesy died in June 1871. Eleanor Creesy lived to see the new century, dying in August 1900 at the age of eighty-five.