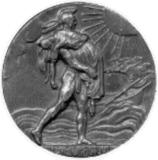 Image: Penelope Stout Commemorative Coin
Shows her being carried away by Indians

Woes in the New World
Penelope Van Princis Stout was born in 1622 in Amsterdam, the Netherlands. She married John Kent in 1640, and the couple sailed for New Amsterdam (now New York City) on Manhattan Island in the American colony of New Netherland. For unknown reasons, their ship ran aground at the coast of what is now Monmouth County, New Jersey. The ship’s other passengers decided to continue toward their destination on foot, but Penelope remained with her sick husband who was too weak to walk.

Penelope and her husband had not been in the woods very long when they were attacked by Native Americans and left for dead. But the woman was not killed – only stunned. She was horribly cut and mangled, her skull fractured, her left shoulder hacked, and a great cut across the abdomen caused her bowels to protrude. There was little hope of her ever recovering – but no one told her that!

After the Indians had gone, she crawled into a hollow tree nearby, and somehow managed to stay alive. On the seventh day, two Indians found her. Penelope prayed that they might end her misery, and the younger Indian was willing to oblige.

Saved by a Friend
The young man was ready to kill her, but the elder one stopped him. Throwing her over his shoulder, he carried her to his camp, where he sewed up her wounds with fish bone needles and vegetable fiber. Penelope lived with the aged Native American chief until she recovered, and then he took her to her countrymen in New Amsterdam.

In 1642, Penelope met Richard Stout who had left Nottingham, England, because of parental disapproval of his love affair with a girl they considered socially inferior. He had enlisted in the navy, served for seven years, and left his ship in New Amsterdam when his enlistment ended.

Richard found friends among some English settlers who had fled to New Amsterdam from neighboring colonies because of their religious beliefs. Among them were Lady Deborah Moody and her son, Sir Henry Moody. Together they obtained a charter from the Dutch governor to found the first English settlement on Long Island at Gravesend.

Penelope and Richard Stout were married in 1644, when she was 22 and he was 40. They settled at Gravesend on Plantation No. 18, which he had purchased five years earlier. In 1646, he received lot 16 where he grew tobacco. By 1657, seventeen of his twenty acres were under cultivation. In 1661, he bought an adjoining farm, and became the largest landowner of the group.

First Lady of Middletown
After the English took over the rule of New Amsterdam, Penelope persuaded her husband and a number of their neighbors at Gravesend to move across the Lower Bay to what is now eastern New Jersey, near the village of the Indian chief who had saved her life.

The nameless chief was a frequent visitor to the Stout home, and one day, he came to warn her that the tribes were coming to attack the settlement. He urged her to take her family and flee to safety in his canoe. When she told Richard the news, he refused to believe it, but she gathered her children and paddled away.

After Penelope left, Richard reconsidered and gathered the men of the settlement together. They armed themselves and sent the other women and children in canoes to wait offshore, while they prepared to watch all night. At midnight the Indians came.

When the whites attacked, the Native Americans, armed with only bows and arrows, were soon on the run. Then Richard Stout walked out into the open and demanded a meeting. When the whites agreed to buy the native lands on which they had settled, an alliance was formed.

The whites and the Native Americans held a two-day ceremony to celebrate their new peace agreement. This treaty was faithfully kept. Though other settlements had war with the natives, this one avoided it.

The governor gave the settlers a statement called the Monmouth Patent, which guaranteed them religious and political freedom. There were fifty families of whites and 500 Indians inhabiting the area at that time.

As the settlement grew into the town of Middletown, Richard was appointed to assist in laying out the lots. And Penelope became known as the First Lady of Middletown.

Deeds were granted, signed and duly paid for, and witnessed. Among the list of claimants for land, Richard heads the list:

Founding a Church
In 1668, Richard, Penelope, and their family met with others in the kitchen of the Stout home to organize the first Baptist Church of New Jersey. Richard and John, his oldest son, were among the eighteen male charter members. Every Sunday the group met at the homes of its members to sing hymns. Twenty years later a log church was built.

Considered the largest landed proprietor, Richard was appointed overseer of Middletown in 1669. He was a member of the first General Assembly composed of deputies and patentees that convened at Portland Poyot, New Jersey, in 1671, and he was also an Indian commissioner.

By 1675, the couple had accumulated so much land that they were able to deed eighteen hundred acres to their heirs.