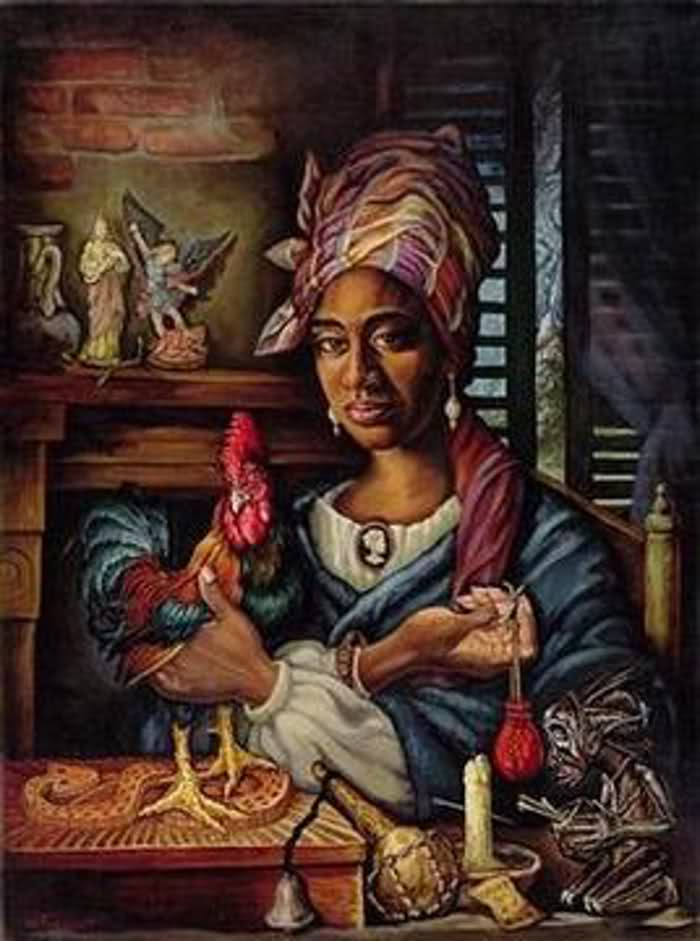 Marie Laveau (1794–1881) was a Louisiana Creole: descended from the colonial white settlers, black slaves and free people of color of southern Louisiana. For several decades this ‘Voodoo Queen’ held New Orleans spellbound. She staged ceremonies in which participants became possessed by loas (Voodoo spirits); she dispensed charms and potions, even saving several condemned men from the gallows; told fortunes and healed the sick.

The first white settlers of Louisiana were French, usually the second born sons of aristocrats who left France to seek adventure in the New World. These Frenchmen came to be called Creole, and made up the upper crust of New Orleans. The word was later used to refer to white Frenchmen as well as people of color in New Orleans. The Creole living in Louisiana at that time inter-mixed with Black slaves, free people of color, Indian and Acadian people. Many Creole today can trace there ancestors back to that time.

Although there is plenty of information about Marie Laveau in the legends and lore of New Orleans, separating the fact from the myth has always been a challenge. Nearly everything that is known about her originates in the secretive oral tradition of the practitioners of Voodoo which has been embellished with hearsay and drama, making an already larger than life persona absolutely formidable in the tales that survive.

Childhood and Early Years
Marie Laveau is believed to have been born in the French Quarter of New Orleans on September 10, 1794, the illegitimate daughter of wealthy Creole plantation owner Charles Laveau and his mistress Marguerite (who was reportedly black and Choctaw Indian). Marie grew up on her father’s plantation where she was educated and studied to be a hairdresser. She was a devout Catholic who went to mass every day of her life.

On August 4, 1819, Marie Laveau married carpenter Jacques Paris, a free person of color from Haiti, and went to live in the French Quarter of New Orleans. Their marriage certificate is preserved in St. Louis Cathedral in New Orleans. This record also contains the names of Marie’s parents: Charles Laveau and Marguerite Darcantrel. Marie was described as tall, beautiful and statuesque, with curly black hair, golden skin and ‘good’ features (then meaning more white than Negro).

Jacques Paris was part of a large Haitian immigration to New Orleans in 1809 after the Haitian Revolution of 1804. These new immigrants consisted of French-speaking white planters and thousands of slaves, as well as free people of color. Those with African ancestry helped revive Voodoo and other African-based cultural practices in the New Orleans community, and the Creole of color community increased markedly.

Paris went missing and was presumed dead in 1824. (Marie insisted that he had died and that she was a widow although there is evidence that he had deserted her). For whatever reason, Paris was out of her life and she was left with two children to raise. Following the custom of the time, Laveau began calling herself the Widow Paris.

After Paris’ death, Marie Laveau began working as a hairdresser catering to the wealthy white and Creole women of New Orleans and this is considered the root of her enduring legend. Many of these women looked upon Marie as a confidante, confessing to her their most intimate secrets and desires about their husbands and lovers, their estates and families, their husbands’ mistresses and business affairs.

Laveau also did some nursing, which included minor surgery in those days. This also included ministering to prisoners on death row, as well as taking in the sick to be nursed in her own home. About 1826 she entered into a common law marriage with Louis Christophe Dumesnil de Glapion, a member of a prominent local family. She lived with him until his death in 1855, but as late as 1850 a newspaper still referred to her as Marie Laveau.

Although she and Glapion never married, Marie had fifteen children by him in rapid succession and ultimately ended her hairdressing career to devote all of her energies to raising her brood. But she by no means lost a clientele, for as she settled into domesticity she also set about becoming the legendary Voodoo Queen of New Orleans.

Marie Laveau is a great example of the mixed races that emerged from New Orleans, as she is said to have been a free person of color and part Choctaw. Although she never abandoned her Catholic roots and always urged people to attend Catholic Mass, she became increasingly interested in her mother’s African traditional beliefs.

Career in Voodoo
While Voodoo was commonly practiced in New Orleans, it had a sinister reputation (and was actually banned at different times in Louisiana history). The Widow Paris learned her craft from a ‘Voodoo doctor’ known variously as Doctor John or John Bayou, and by 1830 she was one of several Voodoo Queens.

Laveau combined Voodoo beliefs and Catholic traditions – holy water, incense, statues of the saints and Christian prayers – which helped make voodoo and hoodoo (the magical rituals associated with voodoo) more acceptable to upper-class New Orleans society. Her beliefs included the recognition of spiritual forces, which can be kind or mischievous, that preside over daily life and intercede in the lives of their followers. Connection with these spirits can be achieved through dance, music, singing and the use of snakes.

Marie Laveau quickly came to dominance as the Voodoo Queen of New Orleans, taking charge of the public Voodoo rituals and ceremonies held at Congo Square, one of the few locations in rigidly segregated New Orleans where people of different races could mix freely. She ran other operations at the ‘Maison Blanche’ (the White House), which was built for secret voodoo meetings and liaisons between white men and black women.

Laveau made a good income by selling gris-gris (an amulet originating in Africa which is believed to protect the wearer from evil or brings luck), charms, magical powders guaranteed to cure ailments, granting desires and confounding or destroying one’s enemies. She also told fortunes, gave advice on love and prepared custom gris-gris for anyone needing to effect a cure, charm or hex.

Some scholars believe that Laveau’s feared magical powers of divination were actually based on her network of informants which she developed while working as a hairdresser in households of the prominent. As she visited her clients (mostly white) she listened closely to their gossip. She also appeared to excel at obtaining inside information on her wealthy patrons by instilling fear in their servants whom she either paid or ‘cured’ of mysterious ailments.

Once the news of Laveau’s powers spread, she overthrew the other voodoo queens of New Orleans. She acted as an oracle (a person who predicts the future), conducted private rituals behind her cottage on St. Ann Street in the French Quarter, performed exorcisms and offered sacrifices to spirits. Oral traditions suggested that the occult part of her magic mixed Roman Catholic beliefs, including saints, with African spirits and religious concepts.

Although a local newspaper once referred to her as “the notorious hag who reigns over the ignorant and superstitious as the Queen of the Voodoos,” she was also feared for her power (with numerous stories of what ‘happened’ to anyone who offended her). At the same time, she healed the sick, and was regarded by many admirers as a living saint due to her humanitarian work. Rich and poor sought the aid of her dark powers to control lovers, gain fame and fortune, become pregnant, and exact revenge on others.

About 1875 Marie Laveau gave her last performance, and announced she was retiring to her home on peaceful Saint Ann Street in the Old Quarter. But she never completely retired. She continued her work until at least 1875, when she is said to have been active visiting the poor and imprisoned, and still giving readings in her home.

On June 15, 1881 Marie Laveau died peacefully at her Saint Ann Street home at age 86. Eminent writer Lafcadio Hearn referred to her as “one of the kindest women who ever lived.” Her fame guaranteed prominent obituaries in the New Orleans Times-Picayune and the New York Times. Reporters painted her in the most glorious terms – a saintly figure who nursed the sick and prayed incessantly with the diseased and condemned.

Marie Laveau was buried in Saint Louis Cemetery #1 in the Laveau-Glapion family crypt. The burials are in above ground vaults; most were constructed in the 18th century and 19th century. The above ground tombs are required here because the ground water levels make burial impractical in New Orleans. The three cemeteries are relatively intact following Hurricane Katrina.

While there is no real evidence that it is actually Marie Laveau’s tomb, hundreds of visitors each year make a regular pilgrimage to the site where, according to tradition, Marie’s spirit would personally intervene to anyone leaving an offering of coins, Mardi Gras beads, flowers, rum or candles.

Her daughter Marie Laveau Glapion – Marie II – was born February 2, 1827, one of the 15 children crowding the Saint Ann Street cottage. It was never known whether her mother chose the role for her daughter, or whether Marie II chose to follow in her mother’s footsteps. By some accounts she shared her mother’s features.

Although Marie II attempted to carry on her Voodoo work, she never matched her mother’s fame. Apparently she lacked the warmth and compassion of her mother because she inspired more fear and subservience than her mother did. Likewise, she began as a hairdresser, eventually ran a bar and a brothel on Bourbon Street.

Marie II was proclaimed to be a talented procuress, able to fulfill any man’s desires for a price. Lavish parties held at the Maison Blanche offered champagne, fine food, wine, music and naked black girls dancing for white men, politicians and high officials. They were never raided by the police who feared that if the crossed Marie she might ‘hoodoo’ them.

Marie II still reigned over the voodoo ceremonies of the blacks and ran the Maison Blanche, but she never regained high notice in the press. She supposedly drowned in a big storm in Lake Pontchartrain in the 1890s. Strangely, when Marie II died, Marie I seemed to pass into obscurity. Since the public had made no distinction between mother and daughter, the death of one ended the career of the other.

Today, thousands still visit the tomb of Marie Laveau to ask favors and leave small gifts – coins, Mardi Gras beads or candles – in the tradition of voodoo offerings. Across the street from the cemetery, offerings of pound cake are left to the statue of Saint Expedite, who represents the spirit standing between life and death. These offerings are believed to expedite the favors asked of Marie Laveau.

Marie Laveau continues to be a central figure of Louisiana Voodoo and of New Orleans culture. Gamblers shout her name when throwing dice, and multiple tales of sightings of the Voodoo queen have been told. Her grave has more visitors than the grave of Elvis Presley. Although she is not yet officially considered a saint, there is a strong movement to have her canonized.

The main focus of New Orleans Voodoo today is to serve others and influence the outcome of life events through the connection with nature, spirits and ancestors. Voodoo methods include readings, spiritual baths, specially devised diets, prayer and personal ceremony. Voodoo is often used to cure anxiety, addictions, depression, loneliness and other ailments. It seeks to help the hungry, the poor and the sick as Marie Laveau once did.