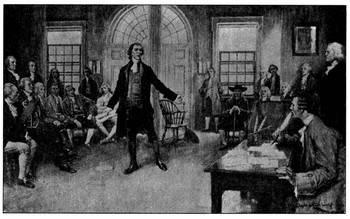 Governing Body During the American Revolution Image: First Continental Congress The First Continental Congress was convened on September 5, 1774, in Carpenters Hall in Philadelphia, the largest city in America at the time. Fifty-six delegates appointed by the legislatures of twelve of the thirteen colonies attended this first meeting, which was in session between September 5 and October 26, 1774. Georgia did not send any representatives to the first Congress. Background The relationship between the Thirteen Colonies and the Kingdom of Great Britain had slowly but steadily worsened since the end of the French and Indian War in 1763. The war had plunged the British government deep into debt, prompting the Parliament to enact a series of measures to increase…

Early Incident in the American Revolution Image: The Burning of the Gaspee Painting by Charles DeWolfe Brownell At the end of the Seven Years’ War, following Britain’s decisive victory, several successive ministries implemented reforms in an attempt to achieve more effective administrative control and raise more revenue in the colonies. The revenue was necessary, Parliament believed, to bolster military and naval defensive positions along the borders of their far-flung empire, and to pay the crushing debt incurred in winning the war on behalf of those colonies. The Newport, Rhode Island area has a long and interesting local history, and since 1741 the town’s tradition has included the Newport Artillery Company, the oldest continuous commissioned military unit in the United States….