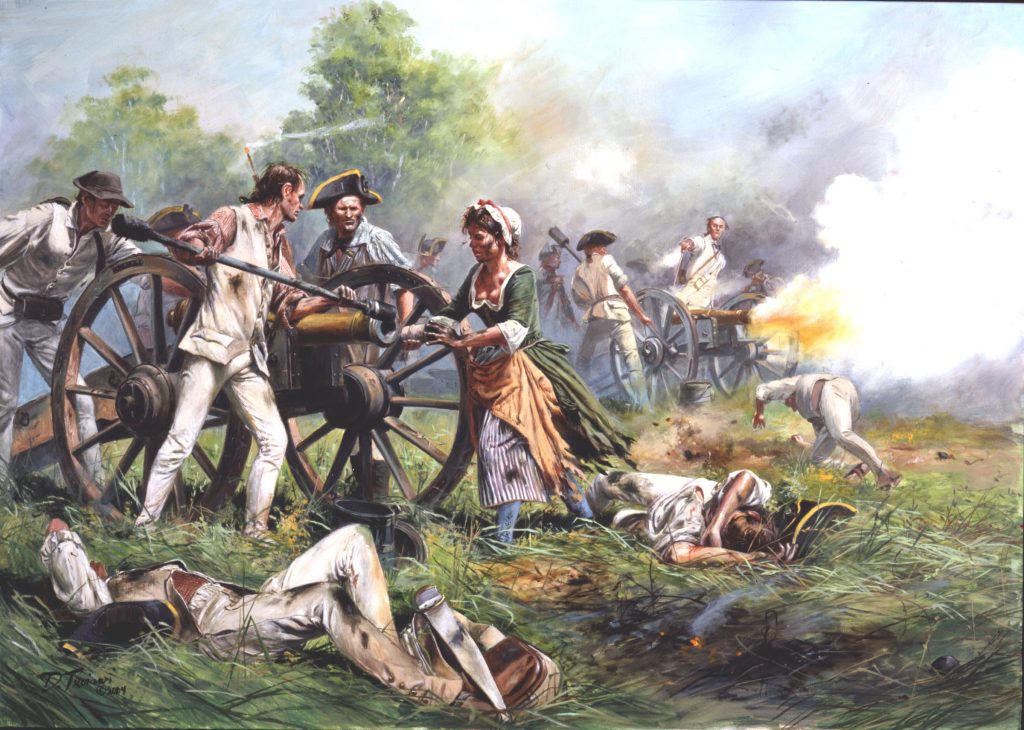 Heroine of the American Revolution

Molly Pitcher was a nickname given to a woman said to have fought in the Revolutionary War. The story of Mary Ludwig Hays McCauley is considered folklore by historians, or they suggest that Molly Pitcher is probably a composite of a number of real women. The name itself may have originated as a nickname for women who carried water to men on the battlefield. It has also been suggested that the story of the cannon also applies to another brave woman named Margaret Corbin, but both accounts could be true.

Mary Ludwig was born on October 13, 1744, on a small farm near Trenton, New Jersey, to a German family. She grew up there and helped her father, who was a dairy farmer. She was raised to be a hard worker, and as typical hardworking farm girl—heavy-set, strong, and sturdy—she could do all the chores and tasks that a small farm requires.

At the age of thirteen, Mary Ludwig was hired by a Mrs. Irvine of Carlisle, Pennsylvania, who wanted a young girl to help with the housework. Mary lived with Dr. and Mrs. Irvine for many years, and it was there that she met her future husband, John Casper Hays, a young barber who lived in the village.

In 1775, John Hays enlisted in the First Pennsylvania Artillery as a gunner. Mary, not wanting to be separated from her beloved John, went with her husband to war, which was not unusual at the time. Mary was probably with him through his entire military experience, since records show that she was at Valley Forge from December 1777 through June 1778. Mary nursed the sick and helped by cooking, washing and sewing.

On Sunday, June 28, 1778, the Battle of Monmouth, New Jersey, was fought on a very hot day, with temperatures approaching 100 degrees. To help the soldiers, Mary carried water from a nearby spring to the thirsty men on that hot and smoky battlefield. The water was also used to cool the blazing cannons. She soon gained the nickname Molly Pitcher.

During the battle, her husband fell from heat stroke. The cannon was ordered to be withdrawn, but Mary immediately seized the rammer, and assisted in loading and firing the cannon for her fallen husband until victory was won.

Joseph Plumb Martin, a soldier from Connecticut, was witness to Mary Ludwig Hay’s valiant actions, and wrote this of her in his war memoir:

A woman whose husband belonged to the artillery and who was then attached to a piece in the engagement, attended with her husband at the piece the whole time. While in the act of reaching a cartridge and having one of her feet as far before the other as she could step, a cannon shot from the enemy passed directly between her legs without doing any other damage than carrying away all the lower part of her petticoat. Looking at it with apparent unconcern, she observed that it was lucky it did not pass a little higher, for in that case it might have carried away something else, and continued her occupation.

Her act of heroism on that day earned her a sergeant’s commission, given by General Nathanael Greene.

Molly Pitcher she stood by her gun
And rammed the charges home, sir;
And thus on Monmouth bloody field
A sergeant did become, sir.

After the war, John Hays received 200 acres of bounty land in Westmoreland County, Pennsylvania, for his service during the Revolutionary War. He and Mary went to Carlisle, Pennsylvania, where they acquired Lot #257. Mary went back to work as a domestic in the State House in Carlisle. They continued to live happily together until her husband’s death in 1789.

After John’s death, she married George McCauley, who had also been a soldier in the Revolutionary War and a friend of her husband.

McCauley was an irresponsible man, and was the primary cause of Mary’s financial downfall. On April 15, 1807, Mary and John McCauley, were forced to sell the bounty property left to her by John Hays for the sum of Thirty Dollars to James Brady of Greensburgh, Westmoreland County, Pennsylvania.

Mary Ludwig Hays McCauley was known familiarly in Carlisle, where she lived for the rest of her life, as Molly Pitcher. She lived on the corner of North and Bedford streets in a house which since has been demolished.

On February 21, 1822, the Pennsylvania State Legislature awarded Molly a yearly pension of $40.

Mary Ludwig Hays McCauley died in Carlisle, Pennsylvania, on January 22, 1832, at the age of 87. She and was buried in the old Carlisle Cemetery with military honors—a company of soldiers firing a salute.

On July 4, 1876, the 100th anniversary of the Declaration of Independence, the citizens of Carlisle, Pennsylvania, erected a white marble monument inscribed: Molly Pitcher, the heroine of Monmouth, over her grave.

Whether we call her Molly Pitcher or Mary Ludwig Hays McCauley, she was a true heroine and an American Patriot. She was a typical woman for her time, but her bravery and dedication to her country is nothing but exceptional.