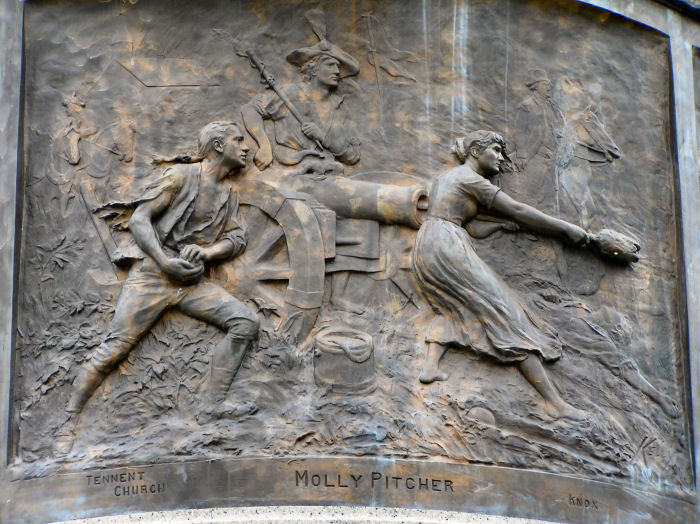 When her husband was overcome with fatigue and collapsed, Molly jumped forward and helped to ‘work the gun.’

Taxed by the Mother Country
Relations between the Thirteen Colonies and Great Britain slowly, but steadily worsened after the end of the Seven Years’ War (1756-1763), which involved all of the major European powers and caused 900,000 to 1,400,000 deaths. The war had plunged the British government deep into debt, and the British Parliament enacted a series of measures to increase tax revenue from the colonies.

Parliament believed that these acts, such as the Stamp Act of 1765, were a legitimate means of having the colonies pay their fair share of the costs of maintaining the British Empire. Although protests led to the repeal of the Stamp and Townshend Acts, Parliament adhered to the position that it had the right to legislate for the colonies.

Many colonists viewed the acts as a violation of their rights, and they responded by forming the Continental Congress and fighting against the British armies in the Revolutionary War. However, the war would not have been able to progress as it did without the support of both male and female inhabitants.

Women Stepped Forward
The significance of the contributions made by American women became increasingly apparent as the colonies struggled for their independence. The war gave some women the opportunity to demonstrate their capacity to assume responsibilities regarded as male. Women took charge of businesses and farms, defended their homes and neighborhoods, gathered intelligence for the Patriots, served as maids and cooks for the Continental Army; still others were nurses and soldiers on the battlefields.

Although most women were noncombatants, they were subjected to the consequences of war, including suffering, violence and death. The women who struggled to maintain their homesteads as fighting raged nearby confronted the threat of violence. Rape by the enemy troops was always a possibility and a source of fear for women defending their homes alone.

The Domestic Front
Ordinary domestic behaviors became charged with political significance as women confronted the Revolution as a war that permeated all aspects of political, civil and domestic life. Support was expressed through traditional female roles: the home, the domestic economy, and their husband’s or father’s businesses.

The Homespun Movement, as a form of protest, promoted American industry, simplicity, and democracy as opposed to British luxury and corruption. In 1767, shortly after Parliament passed the Townshend Act increasing duties on manufactured goods, the colonies passed non-importation resolutions. Instead of purchasing clothing made of imported British materials, Patriot women relied on their own resources, including homespun, a plain-weave cloth made at home. In addition to the boycott of British textiles, the Homespun Movement served the Continental Army by producing clothing and blankets for the soldiers.

During the Revolution, buying American products became a patriotic gesture. Housewives used their purchasing power to support the Patriot cause by refusing to buy British goods for use in their homes. The tea boycott, for example, was a relatively mild way for a woman to support the patriot war effort. Although the Boston Tea Party of 1773 is the most widely recognized protest, for years prior to that Patriot women had been refusing to consume British tea as a political statement.

Women’s Organizations
Women also helped the Patriot cause through organizations such as the Ladies Association in Philadelphia, which recognized the capacity of every woman to contribute to the war effort. The women of Philadelphia collected funds to assist in the war effort, which Martha Washington then took directly to her husband, General George Washington. Other states subsequently followed the example set by founders Esther de Berdt Reed and Sarah Franklin Bache (daughter of Benjamin Franklin). In 1780, the colonies raised over $340,000 through these female-run organizations.

The purpose of the women’s group in Philadelphia, as stated in their Sentiments of an American Woman, was “to contribute as much as could depend on them, to the deliverance of their country.” To do this, the group employed volunteer women to display their commitment to the cause by collecting money from various donors and making other supplies, so that they visibly supported the army. Similar organizations began to spread across the colonies.

Camp Followers
General George Washington confronted the issue of using women in the war effort early in the Revolution. He needed to meet the demand for medical care for his soldiers, and he wanted to find useful employment for groups of women hanging around soldiers’ encampments. The medical corps was authorized to employ one nurse for each 10 sick or wounded. The nurses were paid, at first earning two dollars per month and one daily ration, and by 1777, eight dollars per month and a daily ration.

Many women followed the Continental Army, serving soldiers and officers as washerwomen, cooks, nurses, seamstresses, and occasionally as soldiers and spies. Being a camp follower was not a favored life way of life. Many were the wives, daughters, and mothers of soldiers – often poor, they were unable to support themselves without their husband’s income.

As a camp follower, a woman was paid a small wage and was supplied with a half ration of food for herself. Their duties consisted primarily of cooking, mending, laundry, childcare, and nursing the sick. But their participation in such situations were frequently well beyond the roles dictated by 18th-century society.

Wives of some officers visited the camps frequently. Martha Washington was often with her husband at Valley Forge, where she also served as nurse to injured soldiers. Unlike poorer women present in the army camps, the value of these well-to-do women to the army was symbolic rather than practical. Their presence was a declaration that everyone made sacrifices for the revolutionary cause.

The Battlefront
Although many of the Patriot women exercised their support for the colonial forces from their homes, others confronted the harsh realities of battle. Some women either refused to stay at home without men to protect them, or were economically unable to maintain their households in their husband’s absence.

Women joined army regiments for various reasons: fear of starvation, rape, loneliness, and imminent poverty – either as a last resort or to follow their husbands. There were no real physical examinations for recruits, and the mores of the time dictated that a person’s body be pretty much covered all the time, so it is possible to believe no one might catch on to the deception.

Some women who were not overly feminine in appearance, especially rural women whose hands and face showed a life of physical outdoor labor, were able to sneak into the ranks. There is evidence, as in the case of Deborah Sampson, that some women were known to be such by their messmates, but because of their fighting ability and toughness were accepted as equals.

Margaret Corbin used her own name and appears to have been accepted by her fellow soldiers. She served with her husband in the artillery in the Battle of Ft. Washington where they were both wounded, Margaret losing part of her arm and a breast from grapeshot.

Women Soldiers
Some women participated in the military side of the war. Mary Ludwig Hays, was nicknamed Molly Pitcher because she carried water to American soldiers during the Battle of Monmouth in 1778, and operated his cannon after he fell in battle. Betty Zane saved a fort that was under siege by Native Americans by carrying gunpowder to replenish the depleted supply of the colonial forces.

Rebecca Barrett, wife of a Concord, Massachusetts, militia colonel, hid military stores and equipment on her farm, then remained at home to protect her family and property from the British. She fed the British soldiers, but refused money thrown at her, commenting that “we are commanded to feed our enemy,” but their coins were “the price of blood”.

Mary Hagidorn, upon hearing the order by a Captain Hager for the women and children to retire to the cellar, said: “Captain, I shall not go to that cellar should the enemy come. I will take a spear which I can use as well as any man and help defend the fort.” The captain, seeing her determination, answered, “Then take a spear, Mary, and be ready at the pickets to repel an attack.” She cheerfully obeyed.

Other Patriot women concealed army dispatches and letters containing sensitive military information underneath their petticoats as they rode through enemy territory to deliver it. Deborah Champion, Sarah Decker, Harriet Prudence Patterson Hall, and Lydia Darragh managed to sneak important information past the British to their American compatriots.

The ideals of liberty, equality and independence espoused by the Founding Fathers did little to better women’s lives. They continued to be relegated to the home and domestic spheres. For the most part, women confined their politics to their letters and diaries, but a few women, such as Abigail Adams and Mercy Otis Warren entered the political arena as public figures.

Republican Motherhood
After the war, after having a taste of their own independence by running farms and businesses, American women were reticent to return to the claustrophobia of the domestic sphere. Many women believed they had at least earned the right to an education equal to men’s, but they disagreed on the reasons why they should be better educated.

The American Revolution taught our country’s founders that its citizens should be prepared for any possibility. They saw the education of women as one way to prepare the new country. However, the expansion of women’s education was not meant for their own benefit but to be able to mold future generations into good citizens.

One group believed that women had earned equal status with men in the new nation. The more radical advocates for women’s rights argued that women should be well educated, allowing them to forego marriage if they preferred. In the end, the country reasoned that since children were first taught by their mothers, better educated women meant better educated children in a democracy that could only succeed with well-educated citizens.

Some historians believe that women’s participation in the American Revolution contributed to the emerging role of Republican Motherhood, which assigned women the responsibility for the moral training of their sons for citizenship and led to the expansion of educational opportunities for women.

Republicanism is the American system of government since the American Revolution. It stresses liberty, rights, and the rule of law as central values, makes the people as a whole sovereign (the will of the people), rejects inherited political power, expects citizens to be independent in their performance of civic duties, and is strongly inclined against corruption.