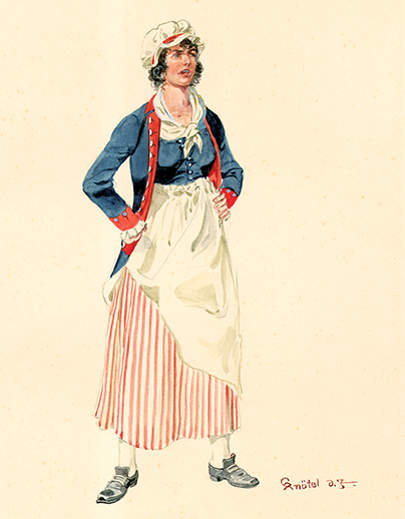 Heroine of the Battle of Fort Washington

Margaret Cochran was born on November 12, 1751, near Chambersburg, Pennsylvania. In 1756, five year old Margaret and her older brother were visiting their uncle when an Indian raiding party attacked her parent’s homestead, killing their father and capturing their mother. The children were then raised by their uncle.

When the Revolutionary War began, John joined the Continental Army, and Margaret went with him. Wives of the soldiers often cooked for the men, washed their laundry and nursed wounded soldiers. They also watched the men do their drills and, no doubt, learned those drills, too.

John’s company was ordered to New York. On November 16,1776, while they were stationed at Fort Washington in upper Manhattan, 4000 British soldiers and Hessian mercenaries attacked the outnumbered Maryland and Virginia riflemen who were defending the position. Corbin’s artillery was ordered to hold off the attackers with what few cannons they had.

During the four hour battle, every hand was needed to man the cannon and muskets. John was assisting a gunner until the gunner was killed. At this point, John took charge of the cannon and Margaret assisted him. Sometime later, John was killed instantly when a Hessian musket ball found its mark.

With no time to grieve, Margaret continued loading and firing the cannon by herself. Because of her aim and accuracy, her position drew the attention of the ten field cannons of the Hessians, and they soon trained their guns on her. She continued to fire, however, until she was wounded by grapeshot which tore her shoulder, almost severing her left arm, mangled her chest and lacerated her jaw. Other soldiers moved her to the rear where she received medical care.

Fort Washington was captured by the British, but the wounded American soldiers were paroled. They were ferried across the Hudson to Fort Lee, New Jersey. Margaret was then transported further in a jolting wagon all the way to an army hospital in Philadelphia. She never recovered fully from her wounds, and was unable to use her left arm for the rest of her life.

On June 26, 1776, the state of Pennsylvania gave Margaret $30.00 due to her disabled condition. received a lifetime disability pension of one-half pay on 1779 from the Continental Congress making her the first woman to obtain such a commitment from the government. 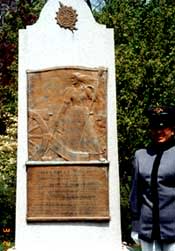 On July 6, 1779, the Continental Congress granted her a pension (“half the pay and allowances of a soldier in service”) due to her distinguished bravery, making her the first woman to receive a pension from the government as a disabled soldier. She was enrolled in the Corps of Invalids, created by Congress for wounded soldiers, and continued to be included on muster lists until the end of the war in 1783. For the next twenty years, she lived in the West Point, New York, area.

There was correspondence between General Henry Knox and Quartermaster William Price between 1782 and 1790 indicating the fact that Margaret needed special care, being she was unable to bathe and dress herself. She had been placed in the care of a Mrs. Randall who lived in Buttermilk Falls (now known as Highland Falls), New York.

Margaret Cochran Corbin died in 1800 near West Point, New York, just prior to her fiftieth birthday, and was buried in the highlands above the Hudson River, identified by only a crude stone marker. Her life and death would have gone into oblivion but for the stories that were handed down by local villagers.

In 1926, the New York Daughters of the American Revolution verified Margaret’s records that recognized her heroism and service to the United States in 1926 at the West point Archives and through the papers of General Henry Knox. Her overgrown grave was found with the help of a retired riverboat captain who claimed that his grandfather helped with the burial in 1800.

The story was reported in the March 18, 1926, issue of the New York Sun. On April 14, 1926, the DAR had Margaret’s remains moved from the obscure grave and re-interred with full military honors at the cemetery of the U.S. Military Academy at West Point, where they also erected a monument to her.

On the hilltop stood Fort Tryon, the northernmost outerwork of Fort Washington and its gallant defense against the Hessian troops by the Maryland and Virginia Regiments, 16 November 1776, was shared by Margaret Corbin the first woman to take a soldier’s place in the war for liberty.

The citizens of Washington Heights and Inwood dedicated the drive within the park and the circle at the southern entrance of the park in her name. The plaque there reads:

During the British-Hessian attack on Fort Washington, 16 November 1776, Margaret Corbin was wounded when she filled the post of her husband John Corbin who was killed while loading artillery. The first woman to fight as a soldier in the Revolutionary War. She is buried at West Point.