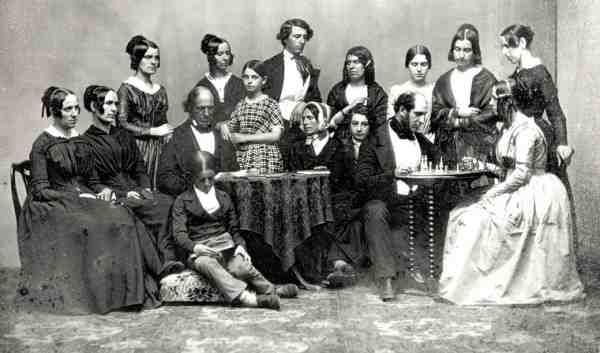 William’s daughter Ellen told the story of the night a runaway slave came to the house:

The Homestead’s doors stood ever open with a welcome to any of the workers against slavery for as often and as long as suited their convenience or pleasure. The Homestead was one of the Stations of the Under Ground Rail Road which was continually helping runaway Slaves from the South to Canada. One night between 12 and one o’clock, I well remember father was awakened by pebbles thrown against his window. He rose asked what was wanted? Bowditch [a neighbor] replied it was he, with a runaway slave whom he wished father to hide till morning, and then help him on his way to Canada, for his master was in Boston looking for him. Father took him in and next morning carried him 15 miles to a Station where he could take a car [train] for Canada. He could not have safely left by any Boston Station.

In 1865, Ellen Jackson helped to found the Freedman’s Aid Society in Newton and served as its President until her death in 1902. Contributions of bedding, clothing and books sent to the black universities of Hampton and Tuskeege Institutes are recorded in the Society’s minute book.

Defining the Railroad
How was the Underground Railroad [UGRR] created? A question not easily answered. It is most often described as a series of safe houses that stretched from the South all the way to Canada which provided shelter and sustenance for runaway slaves. Although slavery was illegal in the northern United States, the Fugitive Slave Act of 1850 allowed slave hunters to travel to the free states, capture runaways, and return them to their masters in the South. Some slaves settled in the free states, but many kept running until they reached Canada where slavery was illegal and slave hunters could not enter.

The heroism of African Americans is diminished by the use of railroad metaphors which divert most of the attention to ‘conductors’ and their ‘stations.’ The tendency to emphasize those white abolitionists who assisted fugitives in their escapes has been overwhelming since the first secondary accounts of the Underground Railroad appeared in print after the Civil War, [Wilbur] Siebert’s being the most influential among them. …

All those who took part in this lengthy and wide-spread expression of civil disobedience, both the runaways and their helpers, risked beatings, imprisonment, and other penalties. The Underground Railroad was, first of all, a community of conscience. While considerable courage was required of all who were involved, it was the runaway slaves who were most vulnerable and whose actions should be judged as the most valiant.

Wilbur Siebert was the author of The Underground Railroad from Slavery to Freedom (1898–99).

Ross Farm
The Ross farmhouse was built by Thomas Burt, whose father acquired the property in Northampton, Massachusetts in 1798. In 1834 Burt sold the property to Samuel Whitmarsh, who planted mulberry trees and built a silk mill on the nearby Mill River. Whitmarsh sold the farmhouse to Samuel Hill, the founder of the Northampton Association for Education and Industry (NAEI), an organization that helped runaway slaves find work and a place to live. 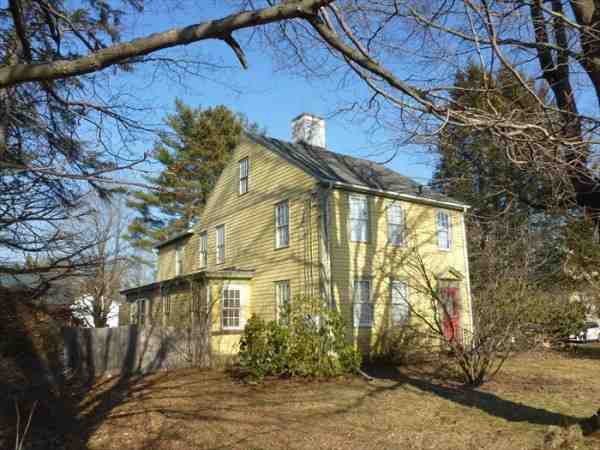 Image: The 300 acre Ross Farm once belonged to the Northampton Association for Education and Industry, a communal society formed in 1841.

Hill’s son stated that the house was also a busy stop on the Underground Railroad:

A good many passengers stopped ‘five minutes for refreshments’ at my father’s, and conductors were often changed here. … Our station was on the line from Hartford going North, though sometimes we had passengers who would come up part way through the Hudson River Valley or diagonally across the Pennsylvania line.

Hill sold the farm to Abel Ross in 1849, who then sold it to his nephew Austin Ross in 1857. Austin was also an avid abolitionist, and he opened the home to runaway slaves en route to Canada. In 1857, the United States Supreme Court ruled in the Dred Scott case. Supreme Court Justice Roger Taney declared that African Americans “had no rights which the white man is bound to respect.” Samuel Hill wrote that this decision:

… frightened the fugitives who had been drawn here by the anti-slavery sentiment of the place, so that they soon after migrated to Canada in which country the Dred Scott decision had no power. This place then became a station on the so called Underground Railroad for transporting the fugitives towards Canada.

After completing her education at the New England Friends Boarding School in Rhode Island, Abby Kelley returned to her parents’ home in Pelham, Massachusetts. After listening to a lecture by William Lloyd Garrison about the abolition of slavery in Lynn, Massachusetts, Kelley joined the Female Anti-Slavery Society of Lynn. Her political views became more radical as she worked alongside abolitionists like Angelina Grimke. She not only advocated for abolition of slavery but for full civil equality for African Americans. 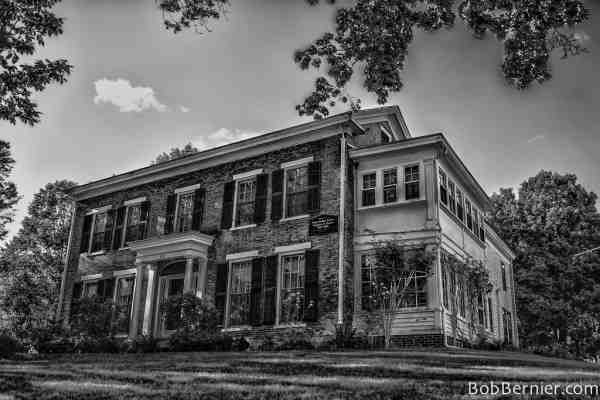 Abby Kelley married Stephen Symonds Foster in 1845. In 1847, the couple purchased Liberty Farm in Worcester, Massachusetts, which included a federal-style farmhouse. They lived there for twenty-five years and sheltered fugitive slaves until the outbreak of the Civil War. The cellar of the house at Liberty Farm contained a secret vault, five by ten feet in size. The only entrance to this vault was a trap-door in the floor of the room above. In this vault the Fosters secreted runaways in their care.

Kelley and Foster also worked as lecturers, touring the country promoting abolitionism and women’s rights. Kelley fought for women’s rights and influenced future suffragists, including Susan B. Anthony and Lucy Stone. She also helped to organize the first National Women’s Rights Convention in Worcester, Massachusetts in 1850.

Hayden House
Harriet Bell Hayden and her husband Lewis Hayden escaped slavery in Kentucky in 1844, traveling first to Ohio, then Michigan and finally settling in Boston, Massachusetts, where they became active abolitionists. In addition to caring for their two children, Joseph and Elizabeth, Harriet ran a boarding house out of their home while Lewis ran a successful clothing store. 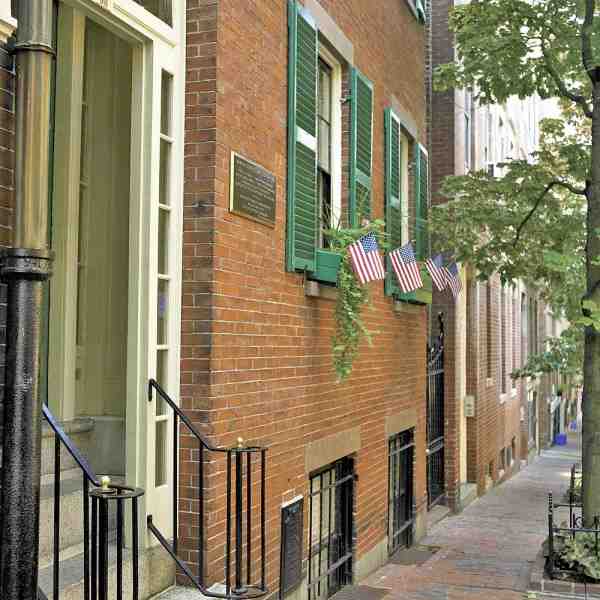 Image: The Hayden House in Boston is one of the best documented stations on the Underground Railroad.

The Haydens sheltered many slaves in their home at 66 Phillips Street in Boston, starting in the 1850s and continuing throughout the Civil War. In 1850, the Haydens assisted a fugitive slave couple, William and Ellen Craft, protecting them from slave catchers on the prowl in Boston.

The Haydens reputedly kept kegs of gunpowder under their front stoop, and when visited by authorities looking to retrieve runaway slaves, would come to the door with lit candles, threatening to blow up their home rather than surrender ex-slaves in their care. The slave hunters left Boston empty-handed.

As anti-slavery societies early took shape in Danvers, Massachusetts, it became an Underground centre with a group of workers, including Mr. and Mrs. D. Brooks Baker, who lived in a cottage that stood at the corner of Elm and Putnam streets. Sarah Elizabeth Bradstreet, a daughter of the Bakers, tells that when she was about seven years old a fugitive came to their house who “had run away after seeing his wife and children sold to other masters.” She stood by the side of the bed in an upper chamber holding a lamp while her parents heated a layer of brown sugar in the bed with a warming-pan and then put the old negro upon it to heal his back, still raw from the whippings be had received. After a fortnight’s nursing he was well enough to be sent on his way.

For another fugitive, about thirty-five years old, she held the lamp while her mother fed him broth with a spoon. Another bad to be nursed also before he could travel northward. As Mr. Baker feared this last man would not have money enough to pay his toll across the bridge into Canada, he went to the boundary and waited on the American side. At the appointed time the fugitive appeared and Mr. Baker paid his toll. He afterwards related that “he never saw anything alive move so fast” as did that slave in his “dash across the bridge to freedom.”