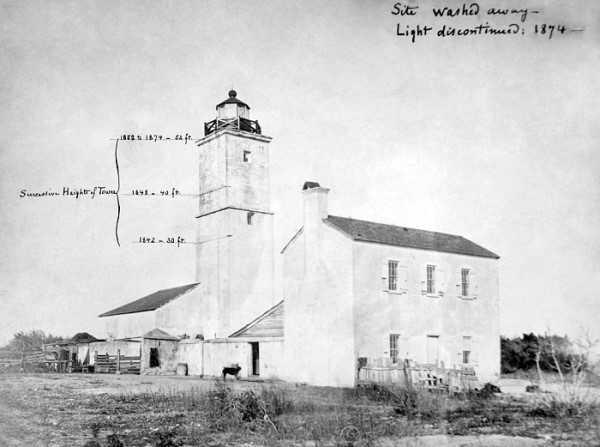 Early on, the Spanish constructed a wooden lookout tower on the northern end of Anastasia Island, overlooking the inlet that leads to St. Augustine and other structures followed. Spain ceded control of Florida to the English in 1763, in exchange for control of Cuba. However, the 1783 Treaty of Paris returned control of Florida to the Spanish, who controlled Florida until 1821 when they relinquished it to the United States, who built many lighthouses along the eastern coast of the state.

Keepers of the Light
Only by maintaining a flashing light along the coastline to mark harbors and hazards were mariners able to manage treacherous seas along shorelines. In the 19th century, the lighthouse keeper was also the first person sailors turned to for help in an emergency; therefore maintenance of a light was vital to the country while the most efficient shipping method was by water. 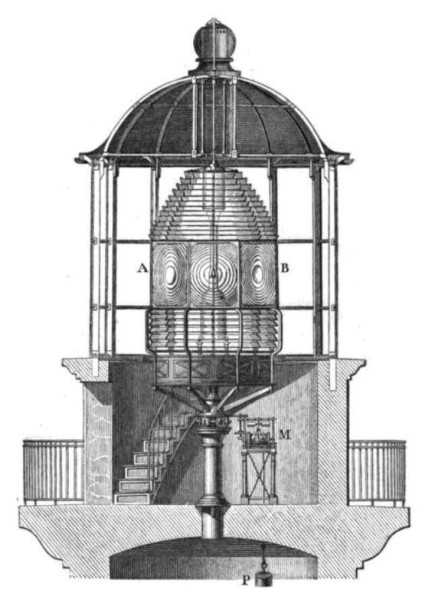 Image: Lighthouse Lantern Room from mid-1800s
Cutaway drawing of a lighthouse lantern room from mid 1800s showing the Fresnel lens. The cylindrical lens with 8 faces stood 10 feet high. A clockwork mechanism, driven by weight, slowly turns the entire lamp-lens assembly on six rollers. This system, invented by Augustin-Jean Fresnel, scans the 8 beams from the lens around the whole horizon. The resulting regularly flashing light seen by mariners served to distinguish the lighthouse from stars or shore lights.

As St. Augustine was the leading port in their newly acquired territory, the U.S. government appropriated $5,000 to convert the old Spanish tower into a lighthouse with a height of about thirty feet. It was placed in service in 1824, three years after Florida became a U.S. Territory. In the early 19th century, the responsibilities of manning a lighthouse were so important that only the president of the United States could appoint and dismiss keepers, who were usually men.

Juan Andreu was the first Hispanic-American to serve in the Coast Guard, which had been founded in 1790, and the first official keeper of the St. Augustine Lighthouse. Juan was born in Florida to parents who had come from Minorca, an island off the eastern coast of Spain. The government paid Andreu $350 a year to care for the lighthouse, including the ten oil lamps that were set in silver reflectors.

The best keepers are found to be old sailors, who are accustomed to watch at night, who are more likely to turn out in [bad weather] and find their way to the lighthouse to trim their lamps, because in such weather, they know by experience the value of a light, while on similar occasions the landsman keeper would be apt to consider such weather as the best excuse for remaining snug in bed.

In the 1850s, the annual salary of a lighthouse keeper was $400. While supplies for the maintenance of the St. Augustine lighthouse were sent by the government, food and supplies for the family were not. So not only did keepers have to ensure the light was continuously lit throughout the night, they fished, hunted, and grew a vegetable garden on the premises. And any children living on the property had to be cared for and educated.

Joseph Andreu, son of Juan Andreu, became St. Augustine keeper in 1854. That same year, the lighthouse was outfitted with a revolving Fresnel lens, and the height of the tower was increased to more than fifty feet. For Joseph, his wife Maria Mestre de los Dolores Andreu served as back up lighthouse keeper, helped with the garden, and raised their children.

Reaching out to lost sailors became a part of the service’s daily responsibilities. U.S. Secretary of the Treasury Levi Woodbury said:

Civility should be enjoined as a duty to strangers wishing to examine the Lights, and, in case of shipwrecks near, every practical effort required to be made to render reasonable and efficient relief, and all due vigilance exercised to detect and expose every breech of the revenue laws in his neighborhood.

First Woman Lighthouse Keeper in Florida
In December 1859, Joseph Andreu was white-washing the lighthouse tower when the scaffolding he was standing on broke and Joseph fell sixty feet to his death. His death greatly alarmed the community, and the town of St. Augustine quickly rallied around Maria, realizing that she was the most knowledgeable person to maintain the lighthouse. 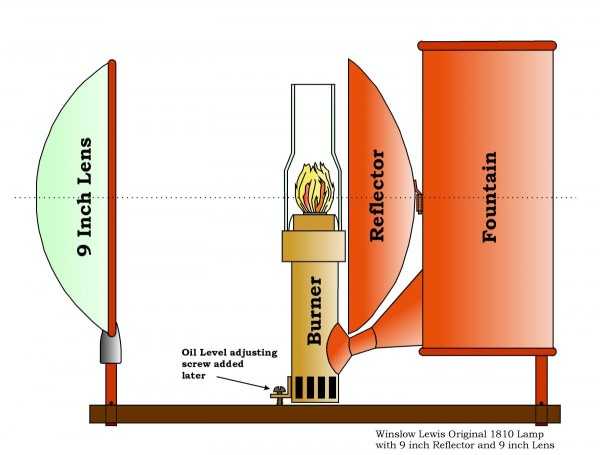 Image: Winslow Lewis Lamp, 9 inch Reflector and 9 inch Lens
The Lantern Rooms were so small that the keepers had great difficulty walking between the chandelier and the outside windows.

The Andreus were among the first in the long history of Hispanic-Americans serving in the U.S. Coast Guard. Maria stood watch at the St. Augustine lighthouse for three years. In 1862, while the Civil War was raging, Confederate forces extinguished the light at St. Augustine so it could not be used by the Union Navy. Confederate soldier Joseph Pacetti was wounded as he removed the Fresnel lens from the lighthouse. Maria Andreu’s job was over; she moved away from the lighthouse but remained in the area.

Maria Andreu’s leadership and perseverance as keeper of the lighthouse inspired generations of women to shine as female employees within federal service through her beacon of light. Andreu opened the doors for women in the Coast Guard like myself and will carry over throughout many generations to come.