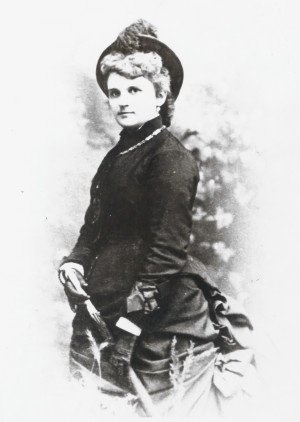 Kate Chopin (1851-1904) was an American author of short stories and novels. Though her writing career began more than two decades after the Civil War ended, her writing was greatly influenced by the aftermath of the war and the time she spent living in Louisiana. Chopin wrote two novels: At Fault (1890) and The Awakening (1899), which are set in New Orleans and Grand Isle, respectively. Most of her fiction focuses on the lives of sensitive, intelligent women.

Childhood and Early Years
Katherine O’Flaherty was born in St. Louis, Missouri on February 8, 1850 to Irish immigrant and successful businessman Thomas O’Flaherty and Creole Eliza Faris, a well-connected member of the French community in St. Louis. Kate was the third of five children, but her sisters died in infancy and her brothers (from her father’s first marriage) died in their early twenties, leaving her the only child to live past the age of twenty-five.

In 1855, at five and a half, Kate was sent to The Sacred Heart Academy, a Catholic boarding school in St. Louis. Her father was killed two months later when a train on which he was riding crossed a bridge that collapsed. Thereafter Kate lived in a house full of smart, independent women: her mother, grandmother and great-grandmother – all of them widows.

From 1855 to 1868 Kate attended the Sacred Heart Academy, where she formed deep bonds with the nuns and the lifelong friend she met at Sacred Heart, Kitty Garasche. Much of the fiction Kate wrote as an adult draws on the nurturing she received from women as she was growing up.

Kate’s great-grandmother, Victoria Verdon Charleville oversaw her education and taught her French, music and the gossip on St. Louis women of the past. She also stressed the need to live life “clearly and fearlessly.” Victoria’s own mother had been the first woman in St. Louis to obtain a legal separation from her husband, after which she raised her five children and ran a shipping business on the Mississippi.

Kate spent the Civil War in St. Louis, a city where residents supported both the Union and the Confederacy and where her family had slaves in the house. Her beloved great-grandmother Madame Charleville died in 1863, and a month later, Kate’s adored half-brother George O’Flaherty, a 23-year-old Confederate soldier, died of typhoid fever while being held in a Northern prison.

From 1867 to 1870 Kate kept a commonplace book – a little notebook in which she recorded diary entries and copied passages of essays, poems and other writings. When she graduated from the Academy of the Sacred Heart in 1868, she was known as a brilliant storyteller, an honors student, a youthful cynic and an accomplished pianist.

In her late teens, Kate was a belle in St. Louis society, where she was known for her wit and her great interest in music. During these years, she began to question the authority of the Roman Catholic Church, because of its subjugation of women.

Marriage and Family
At the age of 19, Kate met Oscar Chopin, the son of a wealthy cotton-growing family in Louisiana. They were married on June 9, 1870 and settled in New Orleans, where Oscar was a cotton broker. Little is known the details of Oscar and Kate’s romance. What is known is that she did not sacrifice her spiritual freedom by marrying him and violated all the rules of expected female behavior. She rolled and smoked Cuban cigars. Her clothes were flashy and stylish, yet always memorable. Kate gave birth to five sons and one daughter by age 29.

The couple were active in the city’s social life, and spent their summers at Grand Isle, a resort on the Gulf of Mexico. Louisiana was in the midst of Reconstruction at the time, and the city was beset with economic and racial troubles. Oscar joined the notorious White League, a Democratic group that in 1874 had a violent confrontation with Republican Radicals, causing President Ulysses S. Grant to send in federal troops.

Oscar’s cotton brokerage failed in 1879, and the family moved north to Natchitoches Parish, where Oscar’s family owned several small plantations. Oscar bought a general store in Cloutierville, Louisiana. The Chopins became active in local society, and Kate became acquainted with the Creole community, which later became an important part of her writing.

After moving to Cloutierville, Kate rode horses in addition to taking walks, but if she was in a hurry, she had a reputation of jumping on her horse and galloping away through the middle of town. She did what she wanted to do and refused to conform to tradition for tradition’s sake.

In 1882, Oscar became ill with malaria. He died in January 1883, leaving Kate a widow at age thirty-two, with six young children and $12,000 in debt (more than $200,000 by today’s standards). Kate made an honest effort to keep the store going, but was unsuccessful. She never remarried.

At her mother’s suggestion, Kate and the children moved to St. Louis, and gradually settled into life there, where finances were no longer a problem. The following year, Kate’s mother died, and Kate fell into a deep depression because of suffering so much loss in such a short period of time.

Chopin’s doctor and family friend suggested that writing might be a source of therapeutic healing. She took his advice, and soon discovered her natural story-telling ability. She also needed to turn her writing into a way to support herself and her six children. Influenced by Guy de Maupassant and other writers, French and American, Kate began to write fiction.

Literary Career
In 1888, her first poem, If It Might Be, was published in the literary and political journal, America. Other stories and articles appeared in the St. Louis Post-Dispatch, Atlantic Monthly, Criterion and Vogue. She began writing short stories about people she had known in Louisiana, but she became known only as a regional color writer and her literary qualities were overlooked.

In 1890, Chopin published her first novel, At Fault, with her own funds. The story involves alcoholism and passionate affairs and received negative reviews. Shortly thereafter, she brought out two collections of her short stories. She submitted another novel, Young Dr. Gosse, but was unable to get it published. In disgust, she later destroyed the manuscript.

But her stories and articles kept her in the public eye, and she was a popular writer for several years, and a force in St. Louis society. During this period, she reserved most of her time for raising her children, writing only one or two days a week. She was never able to live off her earnings from writing, but with that plus the income from her real estate holdings in Louisiana and St. Louis, they lived somewhat comfortably.

In the early 1890’s, Chopin was hosting a literary salon, and her “Thursday’s” were the place to be for anyone with a creative niche. She was also a member of women’s groups. She joined the St. Louis Children of Sodality, and was also a charter member of the prestigious Wednesday Club, which she left when it became more structured, but it remained loyal to her.

From 1892 to 1895, she wrote short stories for both children and adults which were published in such magazines as Atlantic Monthly, Vogue, The Century Magazine and The Youth’s Companion. Her major works were two short story collections, Bayou Folk (1894), a collection of twenty-three of Chopin’s stories.

Her important short stories include “Desiree’s Baby” (1893), which follows the short marriage of Desiree who is abandoned as a baby and adopted and raised by a loving family. After she and her husband have a baby, and the baby has a dark complexion, her husband accuses her of being of black descent and makes her leave. Ironically, only days later, the husband discovers a letter left to him by his mother which explains that it is he who is of mixed race.

Kate Chopin’s picture appeared in the December 1894 issue of Vogue. The caption praised both her brains and beauty:

A beautiful woman, whose portrait fails to convey a tithe of the charm of her expressively lovely face, has been an honored contributor to Vogue… Mrs. Chopin is daring in her choice of themes, but exquisitely refined in the treatment of them, and her literary style is a model of terse and finished diction.

In 1897 Way and Williams of Chicago published A Night in Acadie, a collection of twenty-one short stories which shows her growing interest in passion, sexuality and marriage. Like Bayou Folk, A Night in Acadie was praised by critics. One reviewer called it “a string of little jewels,” and a modern critic considers it one of America’s great nineteenth-century books of short stories. In 1899 one of her stories appeared in the Saturday Evening Post.

In 1899, her second novel and her best known work, The Awakening, was published to harsh criticism. A few critics praised the novel’s artistry, but most were very negative. It tells the story of an unhappy wife who explores her sexuality. A bit too racy for the times, it is now appreciated as an early feminist work. Out of print for several decades, it is now widely available and critically acclaimed for its writing quality.

Later Years
Chopin was crushed by the reaction to her book, and in the remaining five years of her life, she wrote only a few short stories, and only a small number of those were published. In 1900 she wrote The Gentleman from New Orleans, and that same year she was listed in the first edition of Marquis Who’s Who.

Herbert S. Stone, for unknown reasons, canceled her contract for A Vocation and a Voice, which included work previously rejected by magazine publishers (this collection was published by Penguin Classics in 1991, 87 years after her death). In 1902 “A Vocation and a Voice,” the title story of Chopin’s proposed volume, was published in the St. Louis Mirror. Her last published story appeared in Youth’s Companion.

In 1904 Kate Chopin bought a season ticket for the St. Louis World’s Fair, which was not far from her home. It had been hot in the city all that summer, and August 20 was especially hot. When she returned home from the fair, she was very tired. She called her son at midnight complaining of a pain in her head, probably a cerebral hemorrhage. She lapsed into unconsciousness the next day.

Chopin’s novels were mostly forgotten after her death, but in the 1920s her short stories began to appear in anthologies, and slowly people again came to read her. In the 1930s a Chopin biography appeared which spoke well of her short fiction but dismissed The Awakening as unfortunate. However, by the 1950s scholars recognized that the novel is an insightful and moving work of fiction. She is now considered a classic writer who speaks eloquently to contemporary concerns.

And in his 1969 book, Kate Chopin: A Critical Biography, Per Seyersted argues that Chopin “broke new ground in American literature.”

She was the first woman writer in her country to accept passion as a legitimate subject for serious, outspoken fiction. Revolting against tradition and authority; with a daring which we can hardy fathom today; with an uncompromising honesty and no trace of sensationalism, she undertook to give the unsparing truth about woman’s submerged life. She was something of a pioneer in the amoral treatment of sexuality, of divorce, and of woman’s urge for an existential authenticity.