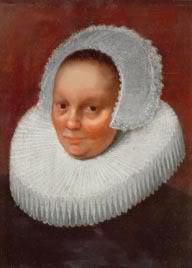 Anneke Webber was an early Dutch colonist in New Amsterdam and New Netherland. She was born in Norway in 1605. She married Roeloff Jans in Amsterdam, Holland, on Friday, April 18, 1623. They had six children. Her name became well-known because of the many lawsuits concerning her farm, which was claimed by her heirs and the Trinity Church in New York City.

But the efforts to colonize New Netherland were faltering. On June 7, 1629, the rules for settlements were relaxed. The first ship of colonists arrived in New Amsterdam on May 24, 1630, the only ship to arrive that year. On board were Roeloff Jans and his wife, Anneke Jans, and their two daughters.

Roeloff was commissioned to farm in the new colony for $72 a year, and the family moved up the Hudson River to the village of Beverwyck—now Albany, New York. Their last two children were born on de Laets Burg Farm on the east bank of the Hudson.

Roeloff hadn’t been a successful farmer, and he was replaced. The family then moved to New Amsterdam, where Roeloff became an employee of the West India Company.

In 1636, Governor Wouter Van Twiller granted to Roeloff and Anneke Jans a 62-acre farm, or Bowerie, on Manhattan Island just outside the limits of the New Amsterdam Settlement, between present-day Broadway and the Hudson River. Roeloff was contracted by the West India Company to farm the plot. He died shortly thereafter and Anneke inherited the land.

Dutch women had more property rights than their other female colonists in the New World. Prenuptial agreements were common at New Amsterdam, and they enabled women with money and/or property to keep their wealth after they married. Anneke Jans wrote one of the first prenuptial agreements, and later drafted them for her daughters, as well.

In March 1638, she married Reverend Everardus Bogardus, the second minister of the Dutch Church of New Amsterdam. They had four sons. He died at sea on September 29, 1647.

After learning of her husband’s death by drowning off the coast of Wales, Anneke moved from her house near the Fort in New Amsterdam back to Beverwyck, where she had a house on land adjacent to property owned by two of her sons from her first marriage.

Anneke Jans died at Beverwyck on February 23, 1663, leaving her property to be divided among her eight surviving children. Her will includes the 62 acres on Manhattan Island. She was buried in the churchyard at Beaver and Hudson Streets.

After the English took possession of New Amsterdam in 1664, all property-holders were required to obtain new titles for their lands. Anneke’s heirs secured a new patent for the farm from Governor Nicolls on March 27, 1667.

On March 9, 1671, the farm was sold to Governor Lovelace. All of Anneke’s heirs signed the deed of transfer, except the wife and child of Cornelius Bogardus, Anneke’s son who had died in 1666. And that omission caused all the subsequent legal problems.

In 1674, the Duke of York (who later became King James II) confiscated the Jans farm. In 1705, Queen Anne granted the farm to Trinity Church (the church itself was at the southernmost tip of Manhattan), and it became known as Trinity’s Lower Farm.

In 1749, Cornelius Brower, a descendant of Cornelius Bogardus (whose heirs had not signed the deed) took possession of a portion of the farm. He was evicted, and filed suit against Trinity Church, which he lost. In 1757, he made another unsuccessful attempt.

In 1784, Cornelius Bogardus, great-grandson of Anneke’s son Cornelius, claimed one-sixth of the Lower Farm. His grounds were that no one from his great-grandfather’s family had agreed to the sale, and one-sixth of that land should belong to his heirs.

He took possession of a house on the farm and built a fence around it. The church hired men to remove and burn the fence. Bogardus then burned some of the church’s fence. He was evicted by the courts in 1786. The courts always ruled that the church held legal title to the land.

The land had been of little value when New York’s northward expansion reached it, but by 1800, the swamp on the property had been drained, and the land improved to the point that commercial buildings and private dwellings had been built on it.

Cornelius Bogardus’ son John brought suit in 1830 to obtain one-thirtieth of the farm and a portion of back rents. He raised the money necessary to carry on this suit by sending circulars to all the descendants of Anneke Jans asking them to contribute, which they did. But in 1847, a judgment was again made in the church’s favor. Several other lawsuits since then have ended with the same result.