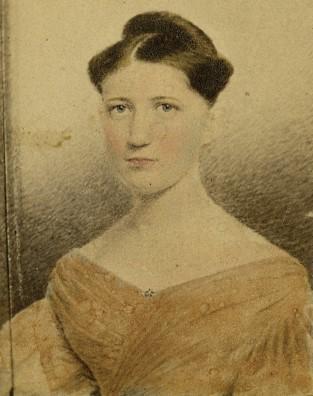 Eunice White Beecher was also author of a novel, From Dawn to Daylight, and several books about housekeeping. Her husband, Henry Ward Beecher of the illustrious Beecher family, became one of the most famous men in the United States during the 19th century.

Early Years
Eunice White Bullard was born August 26, 1812 in West Sutton, Massachusetts, the daughter of Lucy White Bullard and Dr. Artemas Bullard. Eunice was educated in Hadley, Massachusetts. In the meantime, Henry Ward Beecher, almost a year younger than Eunice, had a stammer and was considered one of the less promising of the brilliant Beecher children.

Fourteen-year-old Henry went to boarding school at Mount Pleasant Institute in Amherst, Massachusetts. Although he found the military-style discipline difficult, he began to acquire the skills that would make him a powerful orator. He then attended Amherst College, and by the time he graduated, he was giving speeches and performing in plays.

While at Amherst, Eunice met Henry Ward Beecher, one of her brother’s schoolmates, and they were engaged on January 2, 1832. After graduating from Amherst College, Henry decided to become a minister. He joined his family in Cincinnati, Ohio and enrolled in Lane Theological Seminary where his father Lyman Beecher was president. Eunice remained in Massachusetts. Henry graduated from Lane in 1837.

Marriage and Family
On August 3, 1837, Eunice White Bullard married Henry Ward Beecher, after a five-year engagement. Henry and Eunice eventually had 11 children, but only four lived to adulthood: Harriet, Henry, William and Herbert.

This excerpt from Henry Ward Beecher: The Indiana Years (1837-1847) sums up their first ten years of marriage:

Henry Ward Beecher spent the opening ten years of his ministry in Indiana, first at Lawrenceburg, then as pastor of Second Presbyterian Church in Indianapolis. It was a decade of preparation for the young Beecher, whose ambition seemed always too large for his western parishes. He accepted the pastorate at Lawrenceburg because of its proximity to Cincinnati, where his famous father, Lyman Beecher, presided over Lane Seminary and New School Presbyterians.

Henry Ward’s call to the more promising Indianapolis post in 1839 raised the father’s hope that a Beecher would be in the vanguard of converting the West. It placed the son in intimate contact with state leaders and gave him a pulpit worthy of his oratory. He used the Indianapolis experience to broaden his intellectual interests in numerous directions: horticulture, writing, mesmerism, temperance, education, anti-slavery, evangelism, polity. By the close of his Indiana residency he enjoyed a national reputation as the rising scion of the Beecher clan.

Although Eunice Beecher enjoyed the comforts of her home in New England, she was excited about moving to this unfamiliar territory with her new husband and supporting him in his ministry. Her enthusiasm turned to disappointment when she realized that a minister’s wife was not treated with the dignity and respect as they were back home. They called her the boyish Beecher’s ‘ailing and wailing wife.’ Neither parish could afford to pay well, and the young family struggled.

Literary Career
During her years in Indiana, Eunice White Beecher contributed her writing to various periodicals, often on domestic subjects. During a long illness, she wrote a series of stories about a minister’s wife, in which she expresses her disappointment with Indiana. She later published these as a novel, From Dawn to Daylight: A Simple Story of a Western Home (1859), a thinly disguised autobiography of her own experiences.

Citizens thought she portrayed themselves and their city in a negative light, but the novel included honest and frank descriptions of the city and the land, but in many respects the opposite was true. Beecher clearly depicted what pioneer Indiana was like for early settlers. In fact, after they moved back East, she referred to their time in Indianapolis as being “a very happy home – for many reasons the happiest we ever knew.”

Her book Motherly Talks with Young Housekeepers (1875) is composed of short articles that originally appeared in The Christian Union Magazine. Topics range from house cleaning to recipes to raising children. Originally published in the Household Department of The Christian Union magazine, the articles have become so popular that the author agreed to publish them in book form.

Beecher’s notion of woman’s sphere is that whatever exceptional women may accomplish, the place of labor for most women and for all married women is Home. And this book is “a kind and motherly way of helping the inexperienced to make agreeable, well-regulated, and happy homes.”

Plymouth Church, Brooklyn
In 1847, the Beechers’ financial problems ended when wealthy merchant Henry Bowen hired Henry Ward Beecher as the preacher at the new Plymouth Church in Brooklyn, New York. Thus began the most prominent ministry in the United States in the second half of the nineteenth century. By 1850, there was often not enough room to seat the visitors who came to hear Beecher’s sermons on temperance and the wrongs of slavery.

Therefore, it proved to be a blessing in disguise just two years later when a fire damaged the original church, and a new red brick Sanctuary was quickly constructed with a capacity of almost 3000 seats. After campaigning in New Hampshire, presidential candidate Abraham Lincoln worshiped at Plymouth.

Do As I Say …
Henry Ward Beecher greatly enjoyed the company of women, and rumors of an extramarital affair with a member of his congregation circulated while he was still in Indiana. Within the first year of his ministry in Brooklyn, news of his dalliances with women began to spread. The Brooklyn Eagle wrote a story accusing him of an affair with a young church member who later became a prostitute. The wife of Henry Bowen, the man who had hired Beecher at Plymouth, confessed on her deathbed of an affair with Beecher. 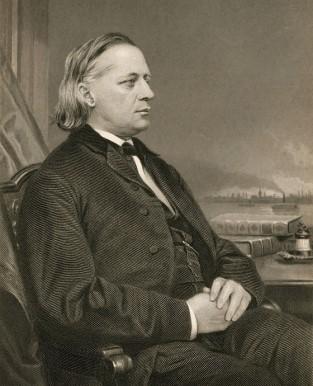 Members of his own circle reported that Beecher had undertaken a romantic relationship with Edna Dean Proctor, an author who later published excerpts from the Reverend’s sermons in her book Life Thoughts (1858). Beecher reportedly told friends that their first encounter had been consensual while Proctor reportedly said to Henry Bowen that Beecher had raped her. However, the couple allegedly then carried on their affair for more than a year.

According to journalist Barry Werth, “it was standard gossip that Beecher preaches to seven or eight of his mistresses every Sunday evening.”

Beecher-Tilton Scandal
In 1870 Elizabeth Tilton confided to her husband Theodore that she had been having an affair with Henry Ward Beecher; the Tiltons were members of the Plymouth Church and Beecher’s close friends. Theodore told Elizabeth Cady Stanton of his wife’s indiscretion and repeated the story to fellow women’s rights leaders Victoria Woodhull and Isabella Beecher Hooker, the Reverend’s sister.

Reverend Beecher had previously targeted Victoria Woodhull in his sermons against free love, which she advocated. Outraged at what she saw as his hypocrisy, she published ‘The Beecher-Tilton Scandal Case’ in her widely distributed paper Woodhull and Claflin’s Weekly. In the article Woodhull presented detailed allegations that Beecher was secretly practicing free love, which he had denounced from the pulpit.

Free Love was a nineteenth-century social movement whose initial goal was to separate the state from sexual matters such as birth control and adultery. Those issues should be the concern of the people involved, and no one else. Its proponents viewed marriage as a form of social and financial bondage. In a speech she delivered in November 1871 in New York City, Woodhull stated her opinion quite clearly:

Yes, I am a Free Lover. I have an inalienable, constitutional and natural right to love whom I may, to love as long or as short a period as I can; to change that love every day if I please, and with that right neither you nor any law you can frame have any right to interfere.

At Beecher’s urging, Victoria Woodhull was arrested in New York City and imprisoned for sending obscene material through the mail. She was later dismissed on a technicality.

Even before the Tilton allegations, Beecher had a reputation for loving the women. Everyone knew he flirted too much, and his delivery from the pulpit was extremely emotional. Females of all ages were seemingly drawn to him. Women in the Plymouth congregation seemed to almost unwillingly fall in love with Beecher, and so he must have made other marriages miserable as well.

Theodore Tilton accused the preacher Beecher of committing adultery with his wife. The Reverend then directed a Plymouth Church committee to investigate the matter, and he was exonerated.

In 1873, Plymouth Church withdrew Tilton’s membership because of his attacks on Beecher. Articles in the Independent were highly critical of Tilton and his attitude toward Beecher. By this time, various documents and letters relating to the matter had appeared in the press. Tilton published angry replies in several major newspapers, and the matter became the subject of intense public scrutiny.

The Trial
In 1875, Theodore Tilton sued Henry Ward Beecher for “alienation of affection.” Yes, one could sue for that in nineteenth-century America; it was also called “criminal conversation.” Beecher was tried on charges that he had committed adultery with Elizabeth Tilton.

The trial began in January 1875 and became a national sensation. It ended the following July after a civil jury deliberated for six days but failed to reach a verdict, and a mistrial was declared. 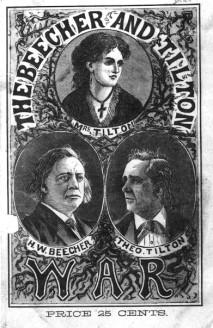 Although it must have been difficult, Eunice White Beecher remained loyal to her husband throughout the resulting scandal, which lasted for seven years. Life was suddenly better for the Beechers after the trial. The church board of trustees awarded Beecher a $100,000 bonus, and his congregation gained many new members.

After the heavy expenses of the trial, the Reverend embarked on a lecture tour of the West, and audiences went in droves to his public speeches. The Reverend made more money in the last ten years of his life than ever before.

Beecher continued to be popular at Plymouth Church but never received the widespread adulation that he had before the scandal.

In 1878 Elizabeth Tilton finally admitted to the affair and was dismissed from Plymouth Church. Theodore Tilton complained that he could not earn a living because of the scandal and ultimately moved to Paris.

In 1884, Beecher angered many of his Republican allies when he endorsed Democratic candidate Grover Cleveland for the presidency, arguing that Cleveland should be forgiven for having fathered an illegitimate child.

Love cannot endure indifference. It needs to be wanted. Like a lamp, it needs to be fed out of the oil of another’s heart, or its flame burns low.