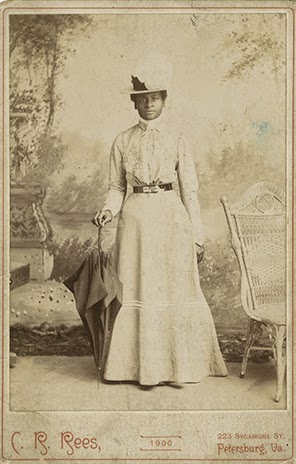 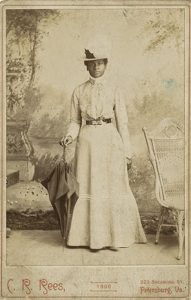 Mary Elizabeth Bowser was a freed slave who worked with Elizabeth Van Lew as a Union spy in Richmond, Virginia during the Civil War. Van Lew sent Bowser to the Quaker School for Negroes in Philadelphia in the late 1850s. After graduating, she returned to Richmond, where

Early Years
Mary Elizabeth Bowser was born a slave on the plantation of John Van Lew, a wealthy hardware merchant in Richmond, Virginia. The exact time of her birth is uncertain, but believed to be about 1840. After Mr. Van Lew died in 1851, his daughter, Elizabeth, a staunch abolitionist, freed all of their slaves.

Mary Elizabeth remained in the Van Lew household after she was freed and worked as a paid servant. But Mary Elizabeth dreamed of having an education, and Ms. Van Lew paid her tuition to the Quaker School for Negroes in Philadelphia in the late 1850s.

After graduating, Mary returned to Richmond and married a freeman named William or Wilson Bowser on April 16, 1861 – just days before the Civil War began. The ceremony was highly unusual because the church parishioners were primarily white. The couple settled just outside Richmond, and Mary continued to work in the Van Lew household.

Spy Work
Soon after the Civil War began, Elizabeth Van Lew asked Mary to help her in the elaborate spying system she had established in the Confederate capitol. Though she was an abolitionist and loyal to the Union, Van Lew was also a prominent member of Richmond because of her father’s wealth and status. However, her views and actions (such as attending to Union soldiers at Libby Prison with food and medicine) earned her the enmity of her community.

Ms. Van Lew used this to her advantage – taking on a slightly crazy, muttering, slovenly personae that earned her the nickname “Crazy Bet” – to hide her efforts to help the Union. She wrote the information she gathered in cipher code, hid the messages in the soles of shoes or hollowed egg shells, then relayed the notes to Union officials through other agents. She also helped escaped prisoners by hiding them in a secret room in her mansion.

Van Lew used her local connections to obtain a position for Bowser as a domestic servant in the home of the Confederate President Jefferson Davis, who talked openly about matters of government and the war in her presence. Bowser had a photographic memory and could later repeat letters and dispatches that she saw in the president’s private study, word for word. Bowser also helped at functions held by Varina Davis, the Confederate president’s wife.

Servants at the Confederate White House were taught to be unobtrusive, so it was easy for Bowser to gain information without being noticed as she cleaned and served meals. They obviously believed she was an illiterate slave, so she had access to a number of military documents, including lists of troop movements, reports on moving Union prisoners and military strategies.

Bowser passed the information she gathered to Van Lew, whom she met occasionally at night near the Van Lew farm just outside Richmond, and it eventually reached Union military officials, including General Ulysses S. Grant. In order to get access to top-secret information, Bowser sometimes disguised herself as “Ellen Bond,” a dim-witted servant.

Apparently President Davis came to realize there was a leak in the house, but did not suspect Mary until late in the war. When suspicion fell on Bowser, she fled from Richmond in January 1865, but she attempted one last act as a Union spy and sympathizer. She tried to burn down the Confederate White House, but was unsuccessful.

After the war, the Federal government destroyed the records of Southern spy activities, to protect their lives – including Bowser and Van Lew. Therefore, details are missing from their stories. Apparently, the Bowser family rarely discussed her work – even among family members – fearing retaliation from lingering Confederate sympathizers.

Bowser’s story was reconstructed from research into Union intelligence operations during the war, and from memoirs of her colleagues in the operation. There is no record of Bowser’s life after the war or her death. It is thought that she returned to the North, possibly to Philadelphia. She left some personal diaries, but unfortunately her descendants, not recognizing their value, threw them away during the 1950s.

In 1995, 130 years after the Civil War ended, the United States Army finally recognized Mary Elizabeth Bowser’s contribution to the Union war effort by inducting her into the U.S. Army Intelligence Hall of Fame in Fort Huachuca, Arizona.

During the ceremony, her contribution was described:

Ms. Bowser certainly succeeded in a highly dangerous mission to the great benefit of the Union effort. She was one of the highest placed and most productive espionage agents of the Civil War. … [Her information] greatly enhanced the Union’s conduct of the war. … Jefferson Davis never discovered the leak in his household staff, although he knew the Union somehow kept discovering Confederate plans.