Confederate Spy in the Civil War 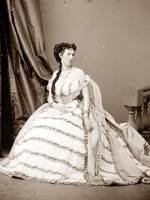 One of the most famous of Confederate spies, Belle Boyd served the Southern forces in the Shenandoah Valley, running her spying operations from her father’s hotel in Front Royal, Virginia. Betrayed by her lover, Boyd was arrested on July 29, 1862, and again in June 1863. Finally released but suffering from typhoid, she went to Europe to regain her health.

Childhood and Early Years
She was born Maria Isabelle Boyd in Martinsburg, Virginia (now West Virginia), on May 9, 1844. Her father, a hotelier and storekeeper, was prosperous enough to send his spirited daughter to Mount Washington Female College in Baltimore, where she studied from 1856 to 1860. She learned to speak French fluently and became thoroughly conversant with classical literature, but she was more interested in horses and could ride well.

Belle was formally presented to Washington, DC society just before the Civil War. Returning to Martinsburg, she took part in fund raising events, and made no secret of her support for the Confederacy.

Belle had her first experience of very real danger in July 1861, when General Robert Patterson’s Pennsylvania Volunteers occupied Martinsburg. The Boyds defiantly displayed the flag of the Confederacy, which annoyed a Yankee soldier, who then forced his way into their home.

In the course of a heated argument, the man shoved Mrs. Boyd out of his way, and Belle shot and killed him with a pistol. Belle could have been tried for murder before a military tribunal, but General Patterson ruled that the girl was only protecting her mother. Nevertheless, Belle moved to Front Royal until tempers cooled.

One evening in May 1862, Union General James Shields and other officers gathered in the parlor of a local hotel. Belle hid upstairs, listening through a knothole in the floor. She learned that Shields had been ordered east, a move that would reduce the Union Army’s strength at Front Royal. That night, Belle rode through Union lines and reported the news to a Confederate scout, then returned to town.

When the Confederates advanced on Front Royal on May 23, Belle ran to greet General Stonewall Jackson’s men, braving enemy fire that put bullet holes in her skirt. She urged an officer to inform Jackson that “the Yankee force is very small. Tell him to charge right down and he will catch them all.”

General Jackson changed his battle plans, tricked the Union commander, and won a decisive victory at Front Royal. That evening, Jackson penned a note of gratitude to her: “I thank you, for myself and for the army, for the immense service that you have rendered your country today.”

Belle was a careless spy, and some Union officers decided to put a halt to her activities. On July 29, 1862, she was arrested and taken to a military prison in Baltimore, where she managed to charm General John A. Dix, who arranged for her to be included in the next prisoner exchange. Belle went right back to Front Royal and her espionage.

On March 17, 1863, Lt. Colonel John Pelham, commanding the Horse Artillery, Cavalry Division, of General Robert E. Lee’s Army of Northern Virginia, was struck by a shell fragment at Kelly’s Ford, dying shortly after at Culpeper. Among the 25-year-old’s personal effects was a Bible in which Belle Boyd had written: “I know that thou art loved by another now. I know thou will never be mine.”

Clearly learning nothing from her incarceration, Belle was arrested again in Martinsburg on August 1, 1863. This time she was sent to the Carroll Prison annex of the Old Capitol. She almost died of typhoid fever, which won her widespread sympathy. The Union solution was to banish their troublesome prisoner, and she was freed on December 1, 1863.

In Richmond, President Jefferson Davis gave Belle important letters to take to England. In May 1864, she left aboard the Greyhound, a blockade runner, to sail for England. The blockade runner was halted by the USS Connecticut, to which she was transferred. Ensign Samuel H. Harding was charged with conveying her to Boston, but Harding fell in love with Belle and took her to Canada instead. The young couple then sailed to London, where they were married on August 24, 1864.

When Harding returned to the United States, he was arrested and imprisoned for treason for aiding in Boyd’s escape. He was released but his health was ruined, and he soon died.

While in England, Belle embarked on a stage acting career, but only small parts came her way. It may have been at this time that she wrote her racy and unreliable account of her life as a spy, Belle Boyd in Camp and Prison.

Belle returned to the United States in 1869, and toured as an actress. On March 17, 1869, she retired from the stage to marry John Swainston Hammond. They moved to California, where she suffered a mental collapse and gave birth to a son in a Stockton insane asylum.

At Mount Hope, near Baltimore, Maryland, she was treated, recovered and was discharged in 1870. She had three more children with Hammond, a traveling salesman, and the family moved to various cities around the country before settling in Dallas in 1883. The marriage was dissolved on November 1, 1884.

Two months later, Belle married twenty-four-year-old Nathaniel Rue High of Toledo, Ohio, a stock-company actor. In 1886, they moved to Ohio, and in order to support her family Belle returned to the stage, with High as her business manager. She debuted in Toledo on February 22, 1886, with a dramatic narrative of her own exploits as a Confederate spy. Until her death, she toured the country, performing her show in a Confederate uniform and cavalry-style hat.

Belle Boyd Harding Hammond High died at the Hile House in Kilbourn, Wisconsin on June 10, 1900, where she had scheduled a reading at the local post of the Grand Army of the Republic. She was broke, having sent her last $2 to her daughter, apologizing for the small amount: “I have been able to play only one night, so I am sending you all I have over expenses, $2.”

Union veterans paid for Belle’s funeral, and six of them served as her pallbearers. She was buried at Spring Grove Cemetery in Kilbourn. Her fashionable house on Pocahontas Street in Dallas, which she sold on July 29, 1887, was razed in 1963.

Belle Boyd might have been an accomplished spy, but at this point it is impossible to separate reality from romantic legend. How much information she passed to Confederate Generals Beauregard, Stonewall Jackson, and J.E.B. Stuart, if any, will never be known.