Pioneer in Education for African Americans and Children 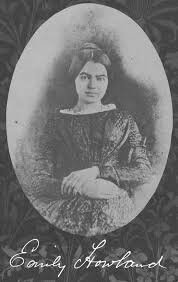 Emily Howland and the Civil War
Abolitionist, educator, philanthropist and suffragist from the village of Sherwood in Cayuga County, New York, Emily Howland was an avid supporter of education for women and African American children. She founded and financially supported fifty schools for emancipated blacks and taught in several of them. She donated the land and financial backing to build a school for black children in her hometown, which later became Emily Howland School.

Early Years
Emily Howland was born in 1827 on a farm near Sherwood, New York to Quakers and wealthy landowners Slocum and Hannah Howland. Slocum Howland was an anti-slavery advocate, banker, entrepreneur, and a leader in his community. The Howland home sometimes served as a station on the Underground Railroad for escaped slaves seeking sanctuary in Canada. The Howlands were prominent in social reform movements throughout the nineteenth century.

Emily Howland later wrote about abolitionist activities from her childhood:

My father’s house was the station for those who fled from slavery. I can remember several arrivals from what was called the patriarchal institution. … There was Herman Phillips, his wife and four children, coming about 1843. … the youngest being an infant, carried in a bag slung on its father’s back, who escaped from Maryland, settled under my father’s protection for some time. But one hapless day a lady came to visit in the neighborhood who recognized them at once, having visited at their master’s house. She promised not to betray them to the slave holder, but they could not thus risk the liberty for which they had dared and suffered, to an uncertainty, and fled in terror to the Queen’s dominions [Canada] where they suffered so much from the more rigorous climate and from other causes that they returned, and the parents ended their days where they began their life of freedom. Just after their return the Fugitive Slave law was passed but they decided to take the risk of remaining here, which they did unimpeded to the end of their lives.

After seven years at home, helping with household chores and working for charities, Miss Emily, as she was known around town, was allowed to enroll in Mary Robinson’s School in Philadelphia as an informal student in 1851. For the next seven years, Emily had tutored classes three months each winter. During this time she also attended lectures with other Quaker girls who would become lifelong friends.

At age 30, Miss Howland began teaching in schools for free blacks in 1857. She taught at Myrtilla Miner‘s Normal School for Colored Girls in Washington, DC until 1859 when she returned to Sherwood to care for mother and the home she had purchased the previous year.

Harriet Tubman
When Harriet Tubman came to Cayuga County, she found a well-established Underground Railroad network that had been operating for more than thirty years. A core group of women, all of Quaker background, maintained continuity: Frances Seward, wife of Senator William Henry Seward and her sister Lazette Worden; Quaker minister Lucretia Mott and her sister Martha Wright.

In 1859, Harriet Tubman purchased a farm just south of nearby Auburn, New York; its African American community was similar to that of Sherwood. Emily Howland soon met Tubman and they became lifelong friends. Hundreds, maybe thousands, of African Americans escaped to freedom through Cayuga County in the thirty-five years before the Thirteenth Amendment, officially proclaimed on December 18, 1865, ended slavery in the United States. 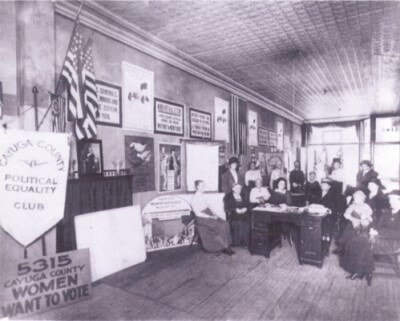 Image: Cayuga County Political Equality Club
Founded by Miss Howland and others in 1891, the club’s purpose was to bring the subject of women’s suffrage to the public eye by lecturing, staging demonstrations, and submitting signed petitions to the U.S. Congress demanding the right to vote for women. In the lower left is the sign they used for demonstrations, which states: “5315 Cayuga County Women Want to Vote”

Contraband Camps
In the early days of the Civil War, as the Union Army occupied areas in the southern states, thousands of slaves flocked to the army for freedom and protection. Federal officials were at a loss – what exactly was the status of these black men, women and children? Since their masters considered them property, Union General Benjamin Butler began calling them contrabands – like enemy possessions that were seized as the contraband of war.

These contrabands would not be returned to their owners; therefore preventing the Confederates from using them in their war effort. They flocked to the nation’s capital by the thousands, where they were housed in camps.

When the abolitionists in Sherwood learned about the camps, Frances Seward encouraged Emily Howland to travel to Washington, DC to teach the freedmen, women and children and help them find employment and build new lives. After arriving in DC, Howland worked at the Washington Contraband Camp, distributing food and clothing, then nursing the ill, and eventually teaching the emancipated slaves.

As the contraband camps became overcrowded and unsanitary, Union leadership alleviated the problem by occupying farms and estates in northern Virginia abandoned when Confederate sympathizers fled at the beginning of the war. In 1863 and 1864, the Federal government created five contraband camps in Arlington County and Fairfax County, Virginia. The former slaves were paid $6-10 per month to raise crops to feed the army. This idea took hold and was eventually approved by Secretary of War Edwin Stanton.

Both children and adults were tutored in camp schools run by the Association of Friends for the Aid and Elevation of Freedmen. Howland worked at Arlington, the abandoned estate of General Robert E. Lee in Alexandria Virginia. About half a mile south of Arlington was Freedman’s Village, which was built to house 600 residents in small wooden framed buildings.

In April 1865, after President Abraham Lincoln was assassinated, Emily Howland returned to Sherwood and spent the winter. She soon became very active in the women’s suffrage movement. Her participation in the temperance movement also connected her to William Lloyd Garrison and his circle. She would use all those connections later in life to raise money and use prominent leaders to promote her causes.

In 1866 Howland purchased Arcadia Plantation in Heathsville, Virginia, where she settled three families from Freedman’s Village and built a log school. She returned the following year and taught at the Howland Chapel School in Heathsville and helped develop the farm until she was called home by the death of her mother. Howland remained in Sherwood to keep house for her father and act as a tutor for her niece Isabel.

Howland assisted Caroline Putnam in starting a school in Lottsville, Virginia in 1868. In the following years, Howland resided in Sherwood and made annual trips to visit the two schools in Virginia – Heathsville and Lottsville – schools. In 1869, Howland supported Cornelia Hancock in her effort to found a colony on Cat Island, South Carolina, modeled after Arcadia. She continued to remain active in the local and national temperance and suffrage movements. 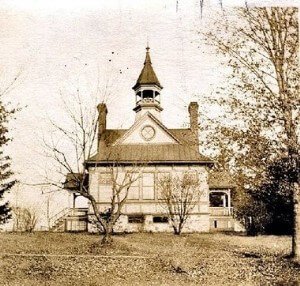 Sherwood Select School
Hepsibeth Hussey had started a school in a house in Sherwood in 1871. In 1882 Emily Howland donated land near her home and built this new building, which was named the Sherwood Select School. This private high school opened in January 1883 with approximately sixty students and four teachers, including Hepsibeth Hussey, who was also principal. The curriculum was carefully selected to prepare young people to enter college.

Women’s Suffrage
Emily Howland had first met suffragist Susan B. Anthony in 1851 and maintained a close friendship with Anthony throughout her life. Although her sympathies remained with the fight for equality (and education for anyone, regardless of color), Howland started to get more heavily involved in the national movement for suffrage in 1891.

In 1891, Howland started the Cayuga County Political Equality Club, which was comprised of both men and women who collected petitions that supported suffrage for women. Although women did not reach their goal until 1920, Howland and her colleagues won small victories along with way – such as the right for men and women to share joint legal custody of their children, and changing the law to allow women to inherit property from their husbands.

A tireless advocate, Howland addressed the Suffrage Committee of the State Constitutional Convention in 1894. She continued the friendships with Anthony, Elizabeth Cady Stanton and others, and she welcomed women on the lecture circuit into her home in Sherwood.

As the new century dawned, Emily Howland continued funding for numerous schools for blacks and other young students and working for women’s suffrage. In February 1904, she spoke at a suffrage hearing before the Senate in Washington, where twelve other pro-suffrage witnesses also testified. Excerpt from Political Women: The Women’s Movement, Political Institutions, the Battle for Women’s Suffrage and the ERA:

There were no committee reports. In fact, [Elizabeth Cady] Stanton, et al, note that during many winters Miss Susan B. Anthony had remained in Washington until she obtained a committee report from these committees, but after she ceased to do this, although the hearings were still granted, nobody made it an especial business to see that the committees made reports and so none was made and action by Congress seemed very remote.

Though many might have given up hope, the petitions, speeches and marches eventually came to fruition. On August 18, 1920 the state of Tennessee ratified the 19th Amendment to the Constitution, constituting the necessary two-thirds majority:

The right of citizens of the United States to vote shall not be denied or abridged by the United States or by any State on account of sex. … Congress shall have power to enforce this article by appropriate legislation.

At the age of 92, Emily Howland went to the polls and cast her vote for the first time.

Late Years
In the 1890s, the National American Woman Suffrage Association honored Emily Howland as a national pioneer in the woman suffrage movement. She turned Sherwood Select School over to New York State as a public school in 1926 and served on the first board of education of the consolidated school district. The school was renamed Emily Howland School in 1927 in celebration of her 100th birthday.

Image: Howland Receives Doctorate Degree
In 1926, the Regents of the State University of New York awarded her an honorary doctorate in literature, the first woman to receive that honor.