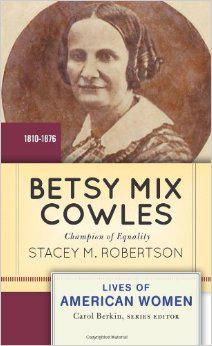 Career in Education
In the late 1820s, Betsy and her sister began opening infant schools, advocating the creation of programs to instruct the very young. In 1827 she began teaching in area schools, and in 1832 she studied in New York City, as part of the infant school movement. When Cowles was 28, she was one of the first students in the Ladies Course at Oberlin College and a member of third female graduating class in 1840.

Cowles did not marry and supported herself as a teacher and principal, and as one of the first women to serve as a school superintendent, which was very rare in the mid-19th century. She was involved in establishing a number of public schools and normal schools in the Ohio towns of Austinburg, Massillon, Canton, Hopedale and Painesville, as well as in Bloomington Illinois.

Career in the Abolitionist Movement
Betsy Mix Cowles also became actively involved in a number of abolitionist organizations, often serving in leadership positions. Beginning in 1835, Cowles served as the secretary of the Ashtabula County Female Anti-Slavery Society, which was one of the largest in the state with more than four hundred members.

She began speaking in public about the evils of slavery, and gained a reputation for her ability to articulate the importance of the anti-slavery cause. Not everyone approved of her popularity, however. Many people believed that women should not speak in public, and Cowles was openly criticized for her speeches. Despite this concern, she continued to participate in the anti-slavery movement.

African Americans were not treated as equals to white people in the new state of Ohio (1803). Enacted in 1804 and 1807, Ohio Black Codes were meant to discourage Blacks from moving to Ohio. One of these laws required Blacks to pay a $500 bond signed by two White men within 20 days of arrival in order to remain in the state. Cowles spoke out against the Black Laws, and resigned one teaching position when the school at which she was working refused to admit black students.

Opposed to the expansion of slavery into the West, she protested the Mexican War. Cowles was critical of the hypocrisy of many Ohioans, who criticized slavery, but did not want to give rights to free blacks. An advocate of immediate abolition, Cowles lectured on the moral depravity of slavery and opened her home to fugitive slaves as a station on the Underground Railroad in Ohio.

By 1835 Cowles was the leader of the Female Anti-Slavery Society of Ashtabula County and a well-known figure in Ohio abolitionist circles. She sang abolitionist ballads with her brother and sister as the Cowles Family Singers and wrote for the Anti-Slavery Bugle of Salem, Ohio, which was supported by William Lloyd Garrison. By 1845, Cowles had become a Garrisonian abolitionist through influence of feminist Abby Kelley. In 1846 and 1847 she helped produce antislavery fairs in Ohio and attended antislavery fairs and meetings in Boston, Massachusetts.

Career in Women’s Rights
Like many women who participated in the abolitionist cause, Betsy Mix Cowles became interested in women’s rights as well. While serving as principal and superintendent of girls’ schools in Canton and Massillon, Ohio in the late 1840s and early 1850s. Cowles also served as the president of the first Women’s Rights Convention in Ohio at Salem in 1850, which reflects her prominence and the respect she had earned by this time.

Delegates learned that later in the year 1850, the state of Ohio was planning to convene a new constitutional convention, and the women wanted to have input into what rights women would be granted within the new Constitution of 1851. Later that year, Cowles attended the Akron Women’s Rights Convention and gave a speech about the inequalities in the wages of men and women and became a member of the executive committee of the newly formed Ohio Women’s Rights Association.

By the late 1850s, Cowles became interested in higher education for women teachers and normal schools, which specialized in educating women specifically for the teaching profession. From 1856 through 1858, she was supervisor of practice teachers at the McNeely Normal School in Hopedale, Ohio. In 1858 she was an instructor at the Illinois State Normal School in Bloomington.

Cowles served as superintendent of public schools in Painesville, Ohio from 1858 through 1860, then taught for two years in Delhi, New York.

In 1862, she retired to Austinburg, Ohio, because of an eye ailment, and then completely lost sight in one eye in 1865, ending her career in education.

On March 22, 2003, Cowles’ former home in Austinburg, Ohio was dedicated by the Ohio Historical Society as a known Underground Railroad station.