Nurse at the Battle of Gettysburg 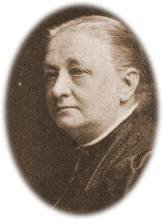 Cornelia Hancock was a nurse for the Union Army whose work at the Battle of Gettysburg where her work was exemplary. The ground was littered with dead and wounded after Pickett’s Charge, and more than 5000 injured Confederate soldiers were left behind when General Robert E. Lee retreated after the three-day battle. The letters Hancock wrote to relatives about her experiences at Gettysburg are priceless.

Cornelia Hancock was born February 8, 1840 in southern New Jersey. She was one of five children in a Quaker family. When the Civil War began, her only brother and her cousins went to war against the South, and Cornelia wanted to do her part for the Union cause. She volunteered as a nurse, but was refused because she was too young and too pretty!

Soon after the onset of war, Dorothea Dix had been appointed the supervisor of women nurses for the Union. Her responsibilities included screening volunteers and establishing the rules for hospital duty. Ms. Dix had strict requirements for her volunteers:

No woman under thirty need apply to serve in government hospitals. All nurses are required to be plain looking women. Their dresses must be brown or black, with no bows, no curls, no jewelry, and no hoop skirts.

In other words, she wanted all of the nurses to look like her!

Hancock’s opportunity came when her brother-in-law Dr. Henry Child asked for her help in the summer of 1863. Cornelia arrived at Gettysburg, Pennsylvania, on the third day of the enormous battle that was fought there. She quickly gained the respect and affection of the soldiers and the medical staff.

The sheer magnitude of the battle’s aftermath was incredible. The day after Pickett’s Charge, the last desperate attempt by the Confederates to salvage something from that engagement, a huge area of ground was littered with the dead and wounded of both sides. The field hospitals were already overworked.

Over 5000 Confederate wounded were left behind when General Robert E. Lee, retreated. Some surgeons were left to care for these men, but they had few supplies. Union doctors had more than twice that many of its own wounded to care for. Right after the battle, the supply of doctors and ambulances were adequate, but when General George Meade was ordered to pursue the Rebels, he took many of those with him.

Hancock wrote long expressive letters to her relatives about her experiences as a nurse at Gettysburg, and the field hospital where she worked. After only a few days, she wrote to her sister, “I feel assured I shall never feel horrified at anything that may happen to me hereafter.”

I was the first woman who reached the Second Corps after the three days fight of Gettysburg. I was in that corps all day not another woman within 1/2 mile… women are needed very badly. There are no words in the English language to express the suffering I witnessed today. The men lie on the ground; their clothes have been cut off them to dress their wounds. They are half naked, have nothing but hard tack [very dense crackers] to eat only as the Sanitary Commissions, Christian Association, and so forth give them.

I gave to every man that had a leg or arm off a gill of wine, to every wounded in Third Division, one glass of lemonade, some bread and preserves and tobacco. They need it very much, they are so exhausted. I would get on first rate if they would not ask me to write to their wives; that I cannot do without crying.

There is a great want of surgeons here; there are hundreds of brave fellows, who have not had their wounds dressed since the battle. We have but one Rebel in our camp now; he says he never fired his gun if he could help it, and, therefore, we treat him first rate.

I do not know when I shall go home—it will be according to how long this hospital stays here and whether another battle comes soon. We give the men toast and eggs for breakfast, beef tea at ten o’clock, ham and bread for dinner, and jelly and bread for supper.

It took nearly five days for some three hundred surgeons to perform the amputations that occurred here, during which time the rebels lay in a dying condition without their wounds being dressed or scarcely any food. If the rebels did not get severely punished for this battle, then I am no judge.

In a tent where eight men lay with nothing but stumps—they call a leg cut off above the knee a “stump”—they said if they held on a little longer they would form a stump brigade and go and fight them. We have some plucky boys in the hospital, but they suffer awfully.

Dr. Jonathan Letterman was Medical Director for the Army of the Potomac. While the battle at Gettysburg was still raging, he was ordered to establish a general hospital nearby, a facility where all wounded could be cared for at a single site. Amazingly, the hospital was ready by mid-July and staffed with surgeons, nurses and cooks.

A steady stream of ambulances transported the wounded men from the makeshift field hospitals to the camp, where each man was assigned to a bed in one of the large tents or wards. The hospital tents were set in rows, five hundred of them.

Dr. Letterman had become proficient at moving patients to larger hospitals as soon as they were able to travel. Less than 100 patients remained at Camp Letterman by November 10, 1863, and it was officially closed a few weeks later.

Hancock was extremely emotional when the Second Corps field hospital was closed and the wounded taken to Camp Letterman. “It is like parting with one’s own family, I go to see the boys and some cry that I cannot stay with them.”

Hancock next turned her attention to the Negroes who were flooding into Washington, DC. They were in desperate need of food, shelter, and medical care. Her work there so impressed the surgeon general that he allowed her to go wherever she felt she was needed.

From the hospital that cared for the newly-freed slaves, Cornelia Hancock wrote on November 5, 1863:

My dear Sister, I shall depict our wants in true but ardent words, hoping to affect you to some action. Here are gathered the sick from the contraband camps in the northern part of Washington. If I were to describe this hospital it would not be believed.

North of Washington, in an open, muddy mire, are gathered all the colored people who have been made free by the progress of our Army. Sickness is inevitable, and to meet it these rude hospitals, only rough wooden barracks, are in use—a place where there is so much to be done you need not remain idle. We average here one birth per day, and have no baby clothes except as we wrap them up in an old piece of muslin, that even being scarce.

This hospital is the reservoir for all cripples, diseased, aged, wounded, infirm, from whatsoever cause; all accidents happening to colored people in all employs around Washington are brought here. It is not uncommon for a colored driver to be pounded nearly to death by some of the white soldiers. A woman was brought here with three children by her side; said she had been on the road for some time; a more forlorn, worn out looking creature I never beheld. Her four eldest children are still in Slavery, her husband is dead.

In February 1864, Hancock was urgently requested to come to the field hospital of the Third Division, Second Corps, near Brandy Station, Virginia. At the beginning of May, she responded to the need for nurses in Spotsylvania County, Virginia. Battles between the Army of the Potomac and Lee’s Army of Northern Virginia raged for almost three weeks there.

Hancock became disgusted by General Ulysses S. Grant‘s style of war, writing, “The idea of making a business of maiming men is not worthy of a civilization. I do not see Grant has accomplished much, yet he fights right straight ahead whether he gets any advantage or not.”

By the end of June, Cornelia Hancock had made her way to City Point, Virginia, which served as Grant’s supply depot during the siege of Petersburg. There were seven hospitals there. The largest, where Hancock worked, was the Depot Field Hospital which covered nearly 200 acres and could hold up to 10,000 patients. There were twelve hundred tents and ninety log barracks. She remained there until the end of the war.

This morning we could see the flames of Petersburg lighting the skies. The wounded are constantly coming in. I shall probably be one of the first Union women in Richmond.

Lee has now surrendered. A bloodless surrender keeps our hospital still empty, and we have time to give attention to a few who are dying just when they want most to live. I shall come home when the 12th New Jersey is mustered out of the service. I am well and very busy finishing up this Rebellion.

But Hancock did not go home. During her time at City Point, she had not forgotten the plight of the emancipated slaves. In 1866, using funds from Philadelphia Quakers and the Freedmen’s Bureau, she opened the Laing School for Negroes in South Carolina, where she taught for ten years.

Hancock then moved to Philadelphia, because of poor health. After a short period of rest, she helped found the Children’s Aid Society and the Society for Organizing Charity in 1878.

Cornelia Hancock remained active in her charity work until the age of 74. Eventually, she went to live with a niece in Atlantic City. She died there at the ripe old age of 87, after a life of total devotion to good works.

If not for women like Cornelia Hancock, where would we be today?