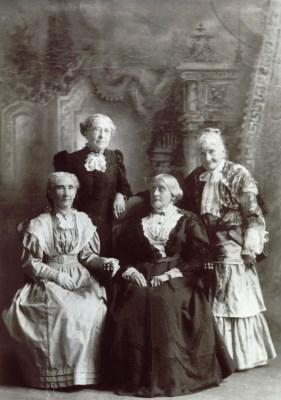 Caroline attended the Upham Female Seminary in Canandaigua and Miss Almira Bennett’s Boarding School in Owasco Lake, New York. In 1835 she graduated with honors from Elizabeth Ricord’s Female Seminary in Geneva, New York. For a short time she taught at a boarding school for girls on the Ohio River below Pittsburgh.

Cleveland
In August 1840, Caroline Seymour married Theodoric Severance, and they moved to Cleveland, where her husband was in the banking business. Five children were born to them between 1841 and 1849. One died in infancy. She credited her marriage with turning her into a social reformer as an abolitionist and as a pioneer in women’s rights and social justice.

The Severance home became a gathering place for reformers and women’s rights activists. Caroline lectured, wrote and organized women’s rights conventions in Ohio and met the suffrage leaders at a Syracuse convention (1852). However, like other leading women of the 19th century, she maintained the conventional emphasis on woman’s role as wife and mother.

Severance and her husband left the Presbyterian Church and formed the Independent Christian Church soon after their marriage. She said:

[W]e could no longer sit conscientiously under a preacher, or in a fellowship, where the golden rule of Christianity was not recognized as applicable to all men, whatever the color of their skin, or crinkle, or non-crinkle of their hair.

In 1853, after several years of attending and speaking at conventions on behalf of women’s rights, Severance made her first appearance as a speaker to the general public with a speech to Cleveland’s Mercantile Library Association, the first lecture delivered there by a woman. Her subject was “Humanity: A Definition and a Plea,” meaning that women should be included as part of humanity.

Severance soon became involved with women’s rights and joined Frances Dana Gage in lecturing, writing, and organizing meetings for the cause throughout Ohio. In 1853 she presided over the first annual meeting of the Ohio Women’s Rights Association. Through this work she met and became good friends with Elizabeth Cady Stanton and Susan B. Anthony.

Boston
Through her many New England friends, Severance developed a great love for the city of Boston and became convinced that Cleveland “did not offer the kind of companionship I craved.” When her husband was offered a position in Boston’s North Bank, the family moved to Boston in 1855.

Before long Severance was very much a part of Boston’s network of reformers, and her home there became a regular stop for traveling lecturers such as Ralph Waldo Emerson, Wendell Phillips and Bronson Alcott. Severance was active in the years before the Civil War in organizations ranging from the Boston Anti-Slavery Society to the New England Hospital for Women and Children. During this time she associated with leading thinkers and delivered abolition lectures.

Severance served on the first board of the New England Hospital for Women and Children. In 1868 she and her friends founded the New England Women’s Club, of which she was the first president. The Club was the first of its kind – a place where women could meet to discuss social issues, literature and art, as well as direct their efforts towards the betterment of society as a whole.

Los Angeles
In 1875, because of her husband’s health and to be near their two older sons the Severances relocated to Los Angeles, buying a tiny home on West Adams Street which they called Red Roof. Both Caroline Severance and her husband, who was called T.C., had a major impact on the development of the city of Los Angeles. T.C. was a founder of the Orphan’s Home Society and the Horticultural Society.

Caroline Severance continued her reform work in California, raising the social consciousness of the city with her tireless civic activity. She led the successful drive on behalf of free kindergartens in the Los Angeles school system and a training school for kindergarten workers. She served as president of the city’s Free Kindergarten Association, and helped establish the Los Angeles Public Library.

In 1878 she founded the Los Angeles Women’s Club, whose members campaigned for the establishment of California’s juvenile court system. Her interests were far ranging, from women’s suffrage to historic preservation to world peace.

As she grew older, she was considered the elder stateswoman of the women’s rights movement in the city, and the press began to be refer to her as Madame Severance, an indication of her prestige. She also became more radical in her thinking, and was active in the city’s Christian Socialism movement at the turn of the 20th century.

In 1881, Severance established a lasting institution, the Friday Morning Club, devoted to cultural and social betterment and civic reform. It was reported that the club “ran a lending library, maintained an employment bureau and conducted classes.” It became one of the most powerful and prestigious organizations in the city.

After her husband’s death in 1892, Caroline Severance barely slowed down. She changed the name of her home to El Nido, Spanish for the nest. Situated in a tree-shaded garden, El Nido was a gathering place for men and women devoted to social change. She held a weekly discussion series there, and championed Christian Socialism, Progressivism, anti-imperialism and peace.

Ella Giles Ruddy wrote in her book The Mother of Clubs: Caroline M. Seymour Severance; An Estimate and an Appreciation:

For more than thirty years this hospitable home has been a rendezvous for literary people visiting Los Angeles, for leaders in progressive thought… in whatever direction it may tend, and for men and women interested also in local or municipal reforms and improvements. The title Mother of Clubs has been supplemented by that of the Ethical Magnet of Southern California…

Having devoted her life to the creation and support of organizations for women, in Los Angeles Severance became known as The Mother of Clubs. In December 1900, the Los Angeles County Woman Suffrage League was reorganized with Caroline Severance as its new president. She served until 1904.

California Women Win the Right to Vote
In 1911, when California women achieved the right to vote, Caroline Severance was lauded as the spiritual leader of the suffrage movement in Southern California. Although her advanced age had limited her participation in the campaign, she was featured in every Los Angeles newspaper the day after the election.

In 1912, at the age of ninety-two she cast her vote in the presidential election, having worked for women’s suffrage for more than sixty years. As she dropped her ballot into the box, a photographer from the Los Angeles Examiner took her photograph. Dressed in her old-fashioned bonnet and cape, she looked into the camera with a serene and determined expression. She told the reporter from the Examiner that she had voted for Roosevelt, for free textbooks and against a racing amendment. She said:

I am more than proud of California women today, and I am so thankful to be able to do my share. California women have thoroughly vindicated their right to the ballot; let us look forward to the time when over all the world men and women shall be equal and free.