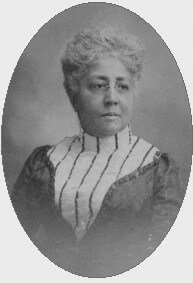 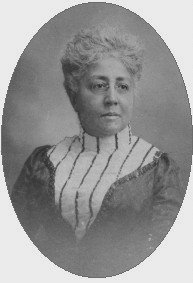 Early Years
Josephine St. Pierre was born August 31, 1842 in Boston, Massachusetts to John St. Pierre, a French and African man from Martinique, and Elizabeth Matilda Menhenick, a white woman from Cornwall, England. Her father was a very successful tailor in Boston and her family was a part of Boston society. Josephine received her education at public schools in Charlestown and Salem, Massachusetts because her parents objected to Boston’s segregated schools.

In 1858 they bought a house on Boston’s Beacon Hill, and began a family, they had five children: Hubert, an attorney; Florida Ridley, a school principal and co-founder of Woman’s Era; Stanley, an inventor; George, a musician; and Robert, who died in his first year of life.

Social Reform Activist
Josephine St. Pierre Ruffin spent much of her life fighting against racial and gender discrimination, taking an active part in many reform organizations. She was active in the abolitionist movement and worked closely with William Lloyd Garrison and Frederick Douglass. She served on the Board of the Massachusetts Moral Education Association and the Massachusetts School Suffrage Association.

During the Civil War, the Ruffins helped recruit black soldiers for the Union Army – the Massachusetts 54th and 55th regiments – and worked for the United States Sanitary Commission, which provided aid for soldiers in the field.

An ardent supporter of woman suffrage, she worked closely with white New England suffragists, including Julia Ward Howe and Lucy Stone. In 1869, Ruffin joined these two women in founding the American Woman Suffrage Association (AWSA) in Boston. She was often the link between wealthy white reformers and the city’s black elite (and vice-versa).

A group of white women founded the New England Women’s Club in 1868; Ruffin was its first black member. She wrote for the black weekly paper, The Courant, and became a member of the New England Women’s Press Association. In 1879, Ruffin created the Boston Kansas Relief Association, which was dedicated to helping African Americans settle in Kansas.

When her husband George died at the age of 52 in 1886, Josephine was only 44. She became even more involved in social activism.

In 1890, Ruffin and her daughter Florida started Woman’s Era (1890-1897), the first newspaper published by and for African American women. Josephine served as editor and publisher; Florida helped with the editing. Woman’s Era called on black women to demand more rights for their race and to become involved in public issues such as suffrage and civil rights.

Although Ruffin socialized and worked with white women reformers, the Jim Crow era (1877-1954) brought with it growing resistance to integration. Jim Crow laws were laws enacted after the Reconstruction period ended (1877) in Southern states that mandated racial segregation in all public facilities in the South. Facilities for blacks were consistently inferior and underfunded compared to those provided for white Southerners.

Black Women’s Club Movement
In 1893, Ruffin founded a club for black women she named the Woman’s Era Club, one of the first African American women’s organizations. It was “not necessarily a colored woman’s club, but a club started and led by colored women.” Its motto was Make the World Better, and virtually every area of the country had at least one of these organizations for black women. They were usually led by a small elite of educated, middle class women who believed they could solve many problems of the race by improving home and community.

Within two years, the club had more than 133 members who met twice a month and paid annual dues of one dollar. The clubs raised funds for scholarships, held classes in civics, domestic science, literature, sponsored kindergartens, organized clinics, among other activities. Black women felt a special calling for racial uplift. Mary Church Terrell wrote that members “have determined to come into the closest possible touch with the masses of our women, through whom the womanhood of our people is always judged.”

Josephine Ruffin believed a national organization of black women’s clubs was needed. In 1895, she brought together several African American women’s groups at the First National Conference of Colored Women to discuss those needs in Boston, which was attended by 100 women from 20 clubs in 10 states. The organization founded at that conference was the National Federation of Afro-American Women. In her opening address, Ruffin stated:

Our woman’s movement is … led and directed by women for the good of women and men, and for the benefit of all humanity… We want, [and] we ask the active interest of our men… We are not drawing the color line; we are women, American women, as intensely interested in all that pertains to us as such as all other American women; we are not alienating or withdrawing; we are only coming to the front, willing to join any others in the same work and cordially inviting and welcoming any others to join us.

The following year, the Woman’s Era Clubs of Boston, the Colored Women’s League of Washington, DC and the National Federation of Afro-American Women merged to become the National Association of Colored Women’s Clubs (NACWC). Mary Church Terrell served as its first president and Josephine Ruffin as one of several vice-presidents. Its mission was to demonstrate the existence of a large number of educated, cultured African American women. 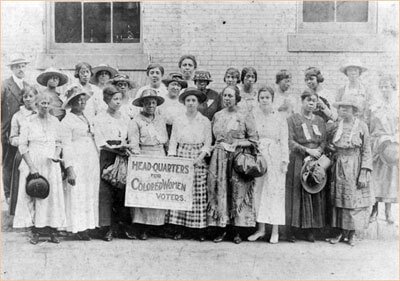 Image: Women of the National Association of Colored Women’s Clubs (1896)

The birth of the NACWC in 1896 marked the beginning of a new era in African American womanhood and provided a vehicle for action through organized effort. Objectives of the NACWC:

Just as the NACWC was forming, Ruffin was integrating the New England Woman’s Club. However, continued resistance from most all-white national women’s clubs reinforced Ruffin’s commitment to the importance of the African American women’s club movement, and she remained an active participant throughout her life.

When the General Federation of Women’s Clubs met in Milwaukee, Wisconsin in 1900, Ruffin planned to attend as a representative of three organizations – the New Era Club, the New England Woman’s Club and the New England Woman’s Press Club. However, Southern women held positions of power in the General Federation and they would not accept Ruffin’s credentials. Some women even tried to snatch her membership badge from her chest on the convention floor.

Ruffin was then told that she would be permitted to enter using her credentials from the white organizations she belonged to, but she refused on principle and was excluded from the proceedings. Other women of color were turned away as well. According to African American Women: A Biographical Dictionary, Ruffin broke with fellow activist Booker T. Washington when he refused to stand up for the women of his race and challenge the organizers of the federal convention for their discriminatory practices.

These events became known as the Ruffin Incident and were covered in many newspapers; most of them supported Ruffin. Disillusioned, The Woman’s Era Club made an official statement “that colored women should confine themselves to their clubs and the large field of work open to them there.” Ruffin wrote:

All over America there is to be found a large and growing class of earnest, intelligent, progressive colored women… many of them warped and cramped for lack of opportunity, not only to do more but to be more.

The New Era Club disbanded in 1903 but Josephine Ruffin remained active in the struggle for equal rights. In 1910, she was a charter member of the Boston chapter of the National Association for the Advancement of Colored People (NAACP), the first local branch of the national association. Along with other women who had belonged to the New Era Club, she co-founded the League of Women for Community Service which still exists today.

Josephine St. Pierre remained active up to the time of her death. She died of nephritis, a kidney infection, on March 13, 1924, in Boston, Massachusetts.