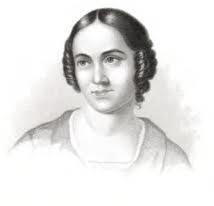 Educator and Novelist in Antebellum America

Caroline Lee Hentz (1800–1856) was a nineteenth century novelist and one of the most popular women writers in antebellum America, most noted for her opposition to the abolitionist movement. Her best known novel, The Planter’s Northern Bride, was written in response to the enormously popular anti-slavery novel Uncle Tom’s Cabin by Harriet Beecher Stowe.

Early Life
Caroline Lee Whiting was born June 1, 1800 in Lancaster, Massachusetts, the youngest of John and Orpah Whiting’s eight children. She was very intelligent and had written a poem, a novel and a tragedy by the age of 12. At age 17, she began teaching at the Lancaster Common School.

On September 30, 1824, Caroline Whiting married Nicholas Marcellus Hentz, a Frenchman who had immigrated to the United States in 1816. An entomologist, novelist and artist, Hentz was intellectually gifted but prone to depression and uncontrollable fits of jealousy.

In 1826 the couple moved from Massachusetts to Chapel Hill, North Carolina, where Nicholas Hentz was professor of modern languages and belles-lettres (creative writing) at the University of North Carolina from 1826 to 1830.

Literary Career
In 1830, the Hentzes moved to Covington, Kentucky, where Nicholas served as headmaster at a female academy. While there Caroline competed for a prize of $500 that had been offered for a play by the directors of the Arch Street Theatre in Philadelphia. The prize was awarded to her for her tragedy of De Lara, or the Moorish Bride, which was produced on the stage to favorable reviews and afterward published in book form.

Two more of her plays were produced, Constance of Werdenberg, or The Forest League at the Park Theater in New York and Lamorah, or the Western Wild in Cincinnati, where the couple had moved in 1832 to oversee another school for girls. In Cincinnati, Caroline joined a literary group to which the future author Harriet Beecher Stowe also belonged.

While in Ohio, Hentz published her first novel, Lovell’s Folly (1833), the purpose of which was to show the incorrectness of the prejudices against southern people. Hentz included unfavorable portraits of recognizable northern citizens. Fearing libel charges, the publisher quickly withdrew the book from circulation.

Although she was born in the North and lived in seven different states, Hentz spent 14 years in Alabama (1834-1848) with her husband and four children. Most of her fiction is set in the South, which she fiercely defended from northern criticism.

In 1834, the Hentzes left Cincinnati following an incident in which Nicholas slapped a man who had sent Caroline a note after a party. It was said of Caroline Hentz that “she was the beautiful, dissatisfied wife of a jealous schoolmaster.” Their often stormy marriage near collapse, the Hentzes moved to the frontier town of Florence, Alabama, where they established the Locust Dell Academy.

During the next 14 years, the Hentzes operated girls’ schools in Florence (1834-43), Tuscalossa (1843-45) and Tuskegee (1845-48). Caroline continued to publish her work, but most of her time was spent assisting her husband at school, cooking meals for the students and tending to her own children.

In 1848, the Hentzes moved to Columbus, Georgia, to open yet another school, but Nicholas’ rapidly deteriorating mental state prompted them to close the school in 1849. Two years later, the Hentzes moved to Marianna, Florida, where Caroline spent her remaining years caring for her husband and writing stories and novels at a feverish pace to support her family.

Hentz wrote her best known works in the 1850s. She was a major literary figure who contributed to the advancement of domestic fiction – novels written by, for and about women that flourished during the mid-nineteenth century. It began with New-England Tale (1822) by Catharine Sedgwick and remained a dominant fictional genre until after 1870.

Along with other southern novelists, such as Caroline Gilman and Augusta Jane Evans, Hentz wrote and helped to popularize domestic fiction. Also called “women’s fiction,” these novels focus on the daily domestic lives of young, mostly middle-class white girls and deliver life lessons that are considered useful in preparing female readers for their lives as adult women.

Hentz rapidly became one of America’s most popular writers. Between 1850 and 1853, Hentz’s books sold more than 93,000 copies. Although much of the fiction of this genre has been criticized as overly sentimental, newer generations of feminist scholars have reevaluated the challenges it poses, however subtly, to male domination.

Hentz’s challenge to Southern patriarchial society was subtle for a reason. She created female characters that are both assertive and independent, but tones them down by the end of her novels. This shows that Hentz thought the cost of coming out strongly against male chauvinism was too steep, and not worth ruining her literary career.

She questioned traditional paternalism but not enough to cause a critical uproar among the mostly male critics of the time. In Eoline, for example, the heroine rebels against her father by refusing to marry his choice of suitor, even though the penalty is the loss of her inheritance. In the end, Eoline marries the chosen suitor of her own free will.

Hentz’s work has also been examined for its promotion of Lost Cause ideology. Her most widely known novel, The Planter’s Northern Bride (1854) is a chilling rebuttal of Harriet Beecher Stowe’s enormously popular antislavery novel Uncle Tom’s Cabin. On its surface, the novel offers readers a marriage plot that covers a deeper theme of defending the institution of slavery through the eloquent rhetoric of the main male character and idyllic scenes of slave life.

The Hentzes did not live long to enjoy her success, however. When Nicholas’s health grew worse, he moved to St. Andrews, Florida to live with their daughter Julia. Caroline stayed in Marianna, traveling to St. Andrews occasionally to tend to her husband.

Caroline Lee Hentz contracted pneumonia and died February 11, 1856, in Marianna, Florida, at the age of 55. She was buried in the cemetery of St. Luke’s Church there. Her husband died nine months later and was buried beside her.

After Hentz’s death, her sons Thaddeus and Charles served in the Confederate army during the Civil War. In 1846 Hentz’s daughter Julia had married Dr. J. W. Keyes. In 1857 they moved to Montgomery, Alabama, where Dr. Keyes became an officer in the Confederate army. After the war they took their family to Brazil, where they joined other southerners attempting to establish a slave-holding society, but they returned in 1870.