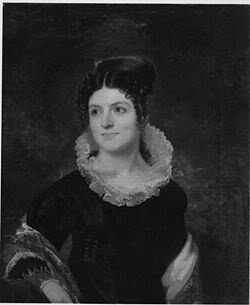 Caroline Gilman was one of the most popular women writers of the nineteenth century. Despite her northern origins, Caroline Gilman’s loyalties gradually shifted toward the South, and she became known as an important southern woman writer during the 1830s and 1840s. Her books promoted domestic tranquility as a solution not only for her heroines’ ills but also for those of the nation.

Caroline Howard was born in Boston on October 1, 1794. Her parents were prosperous and well-connected. Her father died when she was two, and she was raised by an older sister after her mother’s death in 1804. Her formal education was limited, but Caroline developed an early interest in literature.

She wrote poetry as a young woman but shared the attitude of many men and women of her day that publishing was unladylike. When she was 16 years old, one of her poems was published in her school newspaper without her consent, and she cried that she was “as alarmed as if I had been detected in man’s apparel!”

In 1810, Caroline met Samuel Gilman, who was a student at Harvard. She also began spending winters with a brother who lived in Georgia. Caroline and Samuel were married on September 25, 1819, and moved immediately to Charleston, South Carolina, where Samuel served for almost forty years as the minister of the Archdale Street Unitarian Church. Her previous contact with life in the South helped her adjust to Charleston society.

The Gilmans conformed to local custom and owned house slaves. They soon became central figures in the city’s social and literary life. Samuel supported Caroline’s desire to write, but had reservations about women who chose “to move on the agitating theatre of public life.”

He expected Caroline to care for the home, to assist him in his ministerial duties, and to impress “upon the tender minds of youth the precepts of religion.” The couple had seven children, three of whom died in infancy.

She had written only a few poems since moving to Charleston, but she threw herself into writing and publishing after the birth and death of her sixth child in 1831.

In 1832, she founded The Rose Bud, one of the first juvenile weekly magazines published in the United States. Caroline produced most of its content, including three serialized novels later published in book form, and dozens of stories and poems for juvenile and adult readers.

Recollections of a New England Housekeeper, published in 1834, was a popular domestic novel, about an attorney’s wife who educates country women to be her house servants.

Published in 1838, Recollections of a Southern Matron attempted to illustrate the similarities between northern and southern households, but comes off as an idealistic portrayal of a young girl being raised on a Southern plantation. It was also very popular.

While those two novels were publicized as realistic accounts of married life, Caroline avoided writing about any serious marital conflict, and focused instead on the details of household management.

Between 1837 and 1839, she also edited the Boston Lady’s Annual Register and Housewife’s Memorandum-Book. She did not earn as much money as later women writers would, but most of her books were considered bestsellers by the standards of the time. By 1839 she was the most famous female writer of the South.

Most of Caroline’s prose and poetry emphasized women’s limited supporting roles in marriage and in society. At the same time, she was vigorously engaged in the business of writing and publishing and quietly advocating the rights of women.

Her poem Household Woman suggested that a woman should perform every ‘homely task’ with ‘cheerful duty,’ always looking “meekly upward to her God” – a God who is at once her Divine Creator and her husband, the ruler of the domestic sphere. But she also clearly stated that such self-sacrifice could be psychologically damaging, writing that a wife’s “first study must be self-control, almost to hypocrisy.”

Caroline obviously believed that the preservation of family harmony was one of woman’s most important duties and hoped that her writings would inspire women on a national level. She wanted to attract Northern and Southern readers, in order “to increase a good sympathy between different portions of the country.”

But her strong support of slavery alienated many readers in the North. Her defense of an institution she defined as “the strength and almost the very life-blood of this Southern Region of the Confederacy” illustrated her belief in the natural hierarchy of society – which also applied to male-female relationships.

In the fall of 1839, when she was almost 45 years old, Caroline bore and lost her seventh child. She wrote to her sister in January, 1840, that she had developed “something amounting to aversion to the whole writing process,” a process which now “seemed to be almost a disease.”

Gilman wrote only a few original poems during the balance of her long life, though she continued to recycle old material into gift-books and annuals, and also published an anthology of her poetry.

In 1854, looking back on her career, she expressed the same feeling that writing and publishing were unfeminine: “I find myself, then, at nearly sixty years of age, somewhat of a patriarch in the line of American female authors – a kind of Past Master in the order.”

Following Samuel’s death in February 1858, Caroline Gilman remained in South Carolina through the Civil War, vehemently supporting the southern cause to the very end.

Clearly, Caroline Howard Gilman was constantly pushing the boundaries of woman’s place in nineteenth-century society, and could not seem to quite force herself to remain in that box. The injustice is that she was made to feel like an oddity because she was an author and a publisher – and a woman.

Yet, while she was encouraging other women to remain in their ‘sphere’ and to find satisfaction in their domestic duties, she was negotiating book deals, and slaves did her household chores. What a walking contradiction!