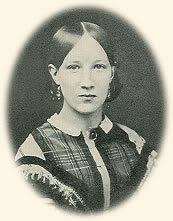 The journal Caroline Richards started when she was 10, parallels a young girl growing up as the nation did too. Although raised by a Puritan grandmother, she was blessed with both humor and the intelligence to think for herself. When Richards heard Susan B. Anthony speak, she signed a pledge to help bring about equal rights for women. And during the Civil War, she sent a letter of support to General McClellan when he was criticized.

Caroline Cowles Richards was born in a small town in upstate New York in 1842 and was raised by her grandparents. Her grandmother, a very religious woman, held true to her Puritan family traditions. She believed in following the word of the Bible. Caroline and her sister, Anna, were expected to lead the traditional life of their Puritan ancestors.

Anna and Caroline were intelligent girls, who loved to read, play and laugh. But they were expected to be polite and well-behaved as well. Caroline also loved to write and began keeping a diary when she was ten years old. From hearing P.T. Barnum and Charles Dickens speak to playing the new game of croquet, Caroline shared her experiences in the pages of her diary.

When the Civil War began, Caroline was a young woman of nineteen living in Canandaigua, New York, a farming village in the state’s Finger Lakes region. Caroline kept a diary of her daily experiences that reveals the sacrifices the community made as the war progressed. Many of Canandaigua’s young men joined the Union Army and the villagers closely monitored the news from the war front.

Many of the young men are going from Canandaigua and all the neighboring towns. It seems very patriotic and grand when they are singing, “It is sweet, Oh, ’tis sweet, for one’s country to die,” and we hear the martial music and see the flags flying and see the recruiting tents on the square and meet men in uniform at every turn and see train loads of the boys in blue going to the front, but it will not seem so grand if we hear they are dead on the battlefield, far from home.

A lot of us girls went down to the train and took flowers to the soldiers as they were passing through and they cut buttons from their coats and gave to us as souvenirs. We have flags on our paper and envelopes, and have all our stationery bordered with red, white and blue. We wear little flag pins for badges and tie our hair with red, white and blue ribbon and have pins and earrings made of the buttons the soldiers gave us.

We are going to sew for them in our society and get the garments all cut from the older ladies’ society. They work every day in one of the rooms of the court house and cut out garments and make them and scrape lint and roll up bandages. They say they will provide us with all the garments we will make. We are going to write notes and enclose them in the garments to cheer up the soldier boys.

It does not seem now as though I could give up any one who belonged to me. The girls in our society say that if any of the members do send a soldier to the war they shall have a flag bed quilt, made by the society, and have the girls’ names on the stars.

On the afternoon of July 3, 1863, at the Battle of Gettysburg, the 126th New York Infantry Regiment held a position at the north end of Ziegler’s Grove and assisted in the Union repulse of Pickett’s Charge, capturing three stands of colors and many prisoners.

Charlie Wheeler was buried with military honors from the Congregational church to-day. Two companies of the 54th New York State National Guard attended the funeral, and the church was packed, galleries and all. It was the saddest funeral and the only one of a soldier that I ever attended. I hope it will be the last. He was killed at Gettysburg, July 3, by a sharpshooter’s bullet. He was a very bright young man, graduate of Yale college and was practising law. He was captain of Company K, 126th N. Y. Volunteers.

News of Lee’s surrender at Appomattox on April 9 spread quickly through the North. The impact of the announcement on a small town in upstate New York was typical – a mixture of unbridled joy and sorrow for those who lost their lives in the conflict.

Whether I am in the body, or out of the body, I know not, but one thing I know, Lee has surrendered! and all the people seem crazy in consequence. The bells are ringing, boys and girls, men and women are running through the streets wild with excitement; the flags are all flying, one from the top of our church, and such a ‘hurrah boys’ generally, I never dreamed of.

We were quietly eating our breakfast this morning about 7 o’clock, when our church bell commenced to ring, then the Methodist bell, and now all the bells in town are ringing. Mr. Noah T. Clarke [Principal of the local boys’ school] ran by, all excitement, and I don’t believe he knows where he is. No school to-day.

I saw Capt. Aldrich passing, so I rushed to the window and he waved his hat. I raised the window and asked him what was the matter? He came to the front door where I met him and he almost shook my hand off and said, ‘The war is over. We have Lee’s surrender, with his own name signed.’ I am going down town now, to see for myself, what is going on.

Later – I have returned and I never saw such performances in my life. Every man has a bell or a horn, and every girl a flag and a little bell, and every one is tied with red, white and blue ribbons. I am going down town again now, with my flag in one hand and bell in the other and make all the noise I can. Mr. Noah T. Clarke and other leading citizens are riding around on a dray cart with great bells in their hands ringing them as hard as they can. Dr. Cook beat upon an old gong.

The latest musical instrument invented is called the ‘Jerusalem fiddle.’ Some boys put a dry goods box upon a cart, put some rosin on the edge of the box and pulled a piece of timber back and forth across it, making most unearthly sounds. They drove through all the streets, Ed Lampman riding on the horse and driving it.

Sadly, a number of those young boys who went off to war from Canandaigua did not return, losing their lives on the battlefields of Gettysburg, the Wilderness, Spotsylvania Court House, Petersburg and others.

The euphoria over the war’s end was shattered a few days later with the news of President Abraham Lincoln’s assassination.

The news came this morning that our dear president Abraham Lincoln was assassinated yesterday, on the day appointed for thanksgiving for Union victories. I have felt sick over it all day and so has every one that I have seen. All seem to feel as though they had lost a personal friend, and tears flow plenteously.

How soon has sorrow followed upon the heels of joy! One week ago tonight we were celebrating our victories with loud acclamations of mirth and good cheer. Now every one is silent and sad and the earth and heavens seem clothed in sack-cloth. The bells have been tolling this afternoon. The flags are all at half mast, draped with mourning, and on every store and dwelling-house some sign of the nation’s loss is visible.

Just after breakfast this morning, I looked out of the window and saw a group of men listening to the reading of a morning paper, and I feared from their silent, motionless interest that something dreadful had happened, but I was not prepared to hear of the cowardly murder of our President. And William H. Seward, too, I suppose cannot survive his wounds. [Seward recovered.]

Oh, how horrible it is! I went down town shortly after I heard the news, and it was wonderful to see the effect of the intelligence upon everybody, small or great, rich or poor. Every one was talking low, with sad and anxious looks. …I trust that the men who committed these foul deeds will soon be brought to justice.

The papers are full of the account of the funeral obsequies of President Lincoln. We take Harper’s Weekly and every event is pictured so vividly it seems as though we were eye witnesses of it all. The picture of “Lincoln at home” is beautiful. What a dear, kind man he was. It is a comfort to know that the assassination was not the outcome of an organized plot of Southern leaders, but rather a conspiracy of a few fanatics, who undertook in this way to avenge the defeat of their cause. It is rumored that one of the conspirators has been located.

Now we have the news that J. Wilkes Booth, who shot the President and who has been concealing himself in Virginia, has been caught, and refusing to surrender was shot dead. It has taken just twelve days to bring him to retribution. I am glad that he is dead if he could not be taken alive, but it seems as though shooting was too good for him. However, we may as well take this as really God’s way, as the death of the President, for if he had been taken alive, the country would have been so furious to get at him and tear him to pieces the turmoil would have been great and desperate. It may be the best way to dispose of him.

Caroline’s diary was published in 1913 as Village Life in America 1852—1872, Including the Period of the American Civil War as Told in the Diary of a School-Girl.