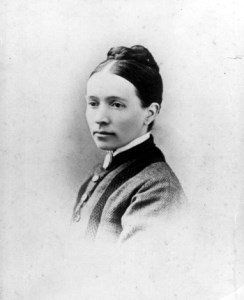 Mary Jane Safford is best known for nursing wounded Union soldiers on battlefields and hospital ships on the Mississippi River during the Civil War, an experience that influenced her to pursue a career in medicine. After the war, she earned her medical degree, established a practice, and taught at the Boston University Medical School.

Early Years
Mary Jane Safford was born December 31, 1834 in Hyde Park, Vermont, but her family moved to Crete, Illinois when she was three years old. After her parents died, family members sent her to a female academy in Bakersfield, Vermont, then allowed her to travel in Canada to learn French and to act as governess to a German-speaking family while learning German. During the 1850s, she taught school while living with her older brother, a wealthy banker in Joliet, Illinois, then Shawneetown, and finally settling in Cairo, Illinois in 1858.

Nursing in the Civil War
When the Civil War began in the spring of 1861, volunteer soldiers descended upon the town of Cairo, setting up camps along the river banks. Diseases soon spread among the troops, and Mary Jane Safford began to visit the camps, tending to the sick and distributing food from her own kitchen. Gradually she won the respect of the officers and surgeons who initially opposed her.

Cairo – located where the Ohio and Mississippi Rivers meet – became of great importance because the rivers were the primary means of transporting supplies and soldiers, including the sick and wounded. When hospital matron Mary Ann Bickerdyke arrived in Cairo in June 1861, she gave Mary Jane a rudimentary nursing course, and then they began requisitioning supplies and setting up several large field hospitals.

Although she was petite and frail, Safford lived up to Bickerdyke’s strict standards, and soon began working as a full-time nurse among the hospitals at Cairo and the neighborhood, constantly visiting from one to the other. She often left the hospital to care for the sick in surrounding camps as well. One onlooker wrote:

[Safford’s] sweet, young face, full of benevolence, pleasant voice and winning manner [that] instate her in everyone’s heart. Every sick and wounded soldier in Cairo knows and loves her, and as she enters the ward, every pale face brightens at her approach. She is performing a noble work… in the quietest and most unconscious manner.

On November 7, 1861, Safford nursed the wounded at the Battle of Belmont, Missouri – just down the river from Cairo. During the battle, she courageously treated the wounded by walking the battlefield with a white handkerchief tied to a stick as her flag of truce amidst enemy fire. More than 300 wounded soldiers were ferried to the hospitals in Cairo. Exhausted by her nursing duties, Safford was forced to take a rest.

On the Hospital Ships
The City of Memphis, built in 1857, was the largest side-wheeler steamer then on the Mississippi River and once employed Samuel Clemens as a pilot. Early in 1862 the steamer ferried both supplies and men for the Ft. Donelson campaign in Tennessee. After the Battle of Ft. Donelson (February 11-16, 1862), it was converted into a Union hospital ship. 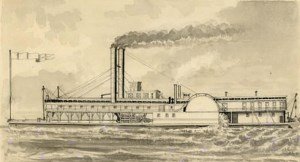 Hospital matron Bickerdyke and nurse Safford volunteered to work aboard the City of Memphis as they brought the wounded off the battlefield back to the regimental hospitals. They cared of the soldiers aboard the steamer and made sure every cot was filled before the boat left for the hospitals at Cairo. Safford made five subsequent trips before collapsing from exhaustion and going to her brother’s home to rest. Bickerdyke later wrote that Mary Jane had worked 10 days in the Cairo hospitals with little sleep.

Safford returned to her duties just before the Battle of Shiloh (April 6–7, 1862) at Pittsburg Landing, Tennessee, where she worked aboard the hospital transport ship Hazel Dell during and after that battle and with Bickerdyke in Savannah, Tennessee field hospitals. However, after caring for the Shiloh wounded, Mary Jane Safford suffered a complete physical breakdown and was confined to bed for several months.

Mary Livermore, an agent of the Northwestern Sanitary Commission, wrote this summary of Safford’s service as a Civil War nurse:

Miss Safford commenced her labors immediately, when Cairo was occupied. I think she was the very first woman who went into the camps and hospitals, in the country; I know she was in the West. There was no system, no organization, nothing to do with. She systematized everything in Cairo, furnished necessaries with her own means, or rather with her brother’s, who is wealthy; went daily to the work, and though surgeons and authorities everywhere were opposed to her efforts, she disarmed all opposition by her sweetness and grace and beauty. She did just what she pleased.

At Pittsburg Landing, where she was found in advance of other women, she was hailed by dying soldiers, who did not know her name, but had seen her at Cairo, as the Cairo Angel. She came up with boat-load after boat-load of sick and wounded soldiers who were taken to hospitals at Cairo, Paducah, St. Louis, etc., cooking all the while for them, dressing wounds, singing to them, and praying with them. She did not undress on the way up from Pittsburg Landing, but worked incessantly.

She was very frail, as petite as a girl of twelve summers, and utterly unaccustomed to hardships. Sleeping in hospital tents, working on pestilential boats, giving up everything to this life, carrying the sorrows of the country, and the burdens of the soldier on her heart like personal griefs, with none of the aids in the work that came afterwards, she broke down at the end of the first eighteen months, and will never again be well…

At her brother’s urging, she accompanied the family of former Illinois governor Joel Matteson on a lengthy European vacation to recuperate. While in Europe, Safford visited hospitals and decided to become a physician. When she returned to the U.S. in the autumn of 1866, she enrolled in the New York Medical College for Women and graduated in 1869.

Medical Career
Dr. Mary Jane Safford then returned to Europe for three years of advanced training. She studied surgery at the General Hospital of Vienna, Austria, and at the University of Breslau, Germany, where she performed the first ovariotomy ever done by a woman. She attended Heidelberg University in Germany with friend and fellow medical student Isabel Chapin Barrows, the first woman ophthalmologist in America.

Dr. Safford returned to America late in 1872, and established a private practice in Chicago. She was among the first, if not the first women gynecologists in the United States, and she specialized in the treatment of poor and indigent females of the inner city. She also developed a plan for mass housing centered around a common service area for cooperative housekeeping to reduce domestic drudgery for women.

Safford married James Blake on September 25, 1872, and moved her practice to Boston. While living at 5 Percival Street during the 1870s, she became estranged from her husband. When the marriage failed, she divorced Blake in 1880 and reverted to her maiden name.

Dr. Safford was a founding faculty member and Professor of Women’s Diseases at Boston University School of Medicine, one of only two professors in the gynecological field. From 1878 to 1886, she served as Professor of Gynecology at BUSM and a staff doctor at the Massachusetts Homeopathic Hospital, retiring in 1886 due to poor health.

Her brother Anson Safford – former governor of the Arizona Territory – founded Tarpon Springs on the west coast of Florida in 1882. Mary Jane moved there that same year, and lived with her brother and his family. She became one of the first female doctors in the state of Florida and was an active supporter of women’s rights.

Dr. Mary Jane Safford died December 8, 1891 at her brother’s home in Tarpon Springs, after a very productive life. She was 57 years old.