Female Soldier in the Union Army 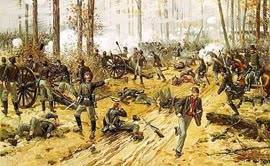 Despite being injured at the Battle of Shiloh in 1862, Jane Short was not discovered as a woman until she became ill a few months later. After her discharge, she reenlisted and served until August 1864.

Many women who disguised themselves as men and enlisted during the Civil War did so to follow a loved one into battle. Others, like Jane Short, alias Charley Davis, were simply looking for adventure. Jane, who enlisted in a Missouri Union infantry regiment in 1861, later explained she was “pining for the excitement of glorious war.”

Two females dressed in Federal uniform were brought to the Irving Block from the front on Tuesday [16th]. They were arrested in the camps of the 21st Missouri Infantry, in which they were serving, one as a drummer and the other as teamster, under the name of Charley Davis and Wm. Morris. The drummer’s real name is Jane Short. Previous to joining the 21st Mo., she served for over a year as private in the 6th Illinois cavalry; into which regiment she enlisted from Shawneetown, Ill,. where she resided before the war.

She was at the Battle of Shiloh, and was there wounded in the hand by a musket ball. After recovering, she rejoined her regiment and participated in various conflicts, until prostrated by sickness and sent to the hospital, which led to her discharge. She then came to Memphis and lived, she does not say how for several months, when pining for the excitement of glorious war again, she joined the band of the 21st Missouri, in which she performed excellent service on the base drum until the time of her arrest.

In appearance she is thick set, full-faced, has short hair of a light color, and blue eyes. In uniform one would never suspect her to be a woman; she looks much like an unsophisticated country lad of twenty years and [earnest?] modesty.

Lou Morris, alias Bill Morris, the younger of the two, is much better looking than her companion, seems more active and sprightly, and, consequently, less modest. She formerly resided in St. Louis, from which place she enlisted in the “Red Rovers” of the 10th Missouri cavalry, eighteen months since, and served nine months, passing unhurt through several engagements.

She then deserted and coming to Memphis, lived as a woman until meeting with Jane Short, with whom she started off the wars again, as teamster in the 2d Missouri Infantry. They were never acquainted before meeting at a hotel in this city. They claim that they have not revealed their sex, nor was it discovered by any of their comrades since they entered the service, and that their enlistment was promoted by patriotic motives only.

They wanted to do a small share towards “licking the rebs” as Lou said. The cause of their arrest, Lou informed me, was that Jane became frightened at the report that the regiment was to be sent out, with others, to meet [Confederate General Nathan Bedford] Forrest, and revealed their sex to one of the officers, who reported them at headquarters, when they were sent to the Provost Marshal of the right wing of the 16th Army Corps, and thence to Memphis.

Lou said she was not frightened, and intends to join another regiment if she gets a chance. Jane is content to return to the paths of peace again. Lou, when dressed in uniform, looks as little like a woman as her companions, and presented the appearance of a hardy boy of eighteen. They are much tanned by exposure. It is the intention of the authorities to send them to their homes, if they have any.

Regardless of their motivation, the women who disguised themselves as men took great pains to avoid detection. Loose-fitting Civil War uniforms facilitated the charade as did the strict gender roles of the time. Anyone who wore pants was automatically assumed to be a man. Also, many of the women who passed as men had a naturally masculine appearance and bearing.