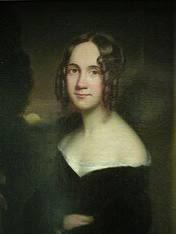 Sarah Josepha Hale (1788-1879) was America’s first woman editor and the author of many novels and poems, publishing nearly fifty volumes of work in her lifetime. President Abraham Lincoln declared Thanksgiving a national holiday in 1864 after Hale had spent 40 years campaigning for a national day of thanks. An early activist for women’s education and property rights and editor of the 19th century’s most successful woman’s magazine (Godey’s) – these are only a few of the many accomplishments of the extraordinary woman who is now unknown to most Americans.

Childhood and Early Years
Sarah Josepha Buell was born October 24, 1788 in Newport, New Hampshire to Gordon and Martha Whittlesay Buell. A voracious reader of whatever books were available, Sarah noticed that “of all the books I saw, few were written by Americans, and none by women,” and she was inspired at an early age, to “promote the reputation of my own sex, and do something for my own country.”

This self-educated young woman upset the prevailing wisdom of the world of education when she began teaching school at age 18 (1806-1813). At that time, women were not accepted as teachers. She also began, in her spare time, to write poetry.

David’s love of learning matched hers and they spent their evenings studying. Sarah described their home life:

We commenced, soon after our marriage, a system of study and reading which we pursued while he lived. The hours allowed were from eight o’clock in the evening till ten; two hours in the twenty-four: how I enjoyed those hours! In all our mental pursuits, it seemed the aim of my husband to enlighten my reason, strengthen my judgment, and give me confidence in my own powers of mind, which he estimated much higher than I. But this approbation which he bestowed on my talents has been of great encouragement to me in attempting the duties that have since become my portion.

Sarah was pregnant with their fifth child when David Hale died unexpectedly of pneumonia in 1822, leaving her with five children to raise on her own. The oldest was seven and the youngest was born two weeks after David’s death. Sarah was 34, and wore black for the rest of her life.

Literary Career
The young widow struggled to support herself and her five children. After a failed attempt to start a millinery business, she resumed writing. Her conclusion was that the “very few employments in which females can engage with any hope of profit, and my own constitution and pursuits, made literature appear my best resource.”

David Hale’s masonic colleagues paid for the publication of a book of Sarah’s poems under the title The Genius of Oblivion and Other Original Poems. Sarah also began to submit stories and poems to literary magazines and quickly gained the attention and respect of editors of the leading periodicals.

These modest successes gave her the time to write her first novel, Northwood; A Tale of New England (1827), which depicted home life in the early Republic, contrasting how life was lived in the North and in the South. It touched on the issue of slavery, which Hale later called “a stain on our national character,” and on the growing economic tensions between the two regions. The reviews and public reception were positive.

With the publication of Northwood, Hale’s career was firmly established, making her one of the first American women novelists and one of the first of either gender to write a book about slavery. The novel not only espoused New England values, but supported the re-Africanization of slaves in the colony of Liberia.

The book’s success also brought a difficult decision. The Reverend John Blake, Episcopal minister and headmaster of the Cornhill School for Young Ladies was impressed by the book, and offered Hale the editorship of a new magazine devoted to women called Ladies’ Magazine. Sarah Hale accepted the position and moved her family to Boston in 1828.

Serving as editor of Ladies’ Magazine from 1828 to 1836, Hale used her position to promote American writers. At a time when other American magazines merely compiled and reprinted articles from British periodicals, Hale was among the leaders of a group of American editors who insisted on publishing material from Americans.

As the first female editor of a magazine in the United States, Hale applied scrupulous editorial standards. She accepted only original material, solicited work from American female contributors and printed articles that she thought would “improve” her readers. The name was later changed to the American Ladies’ Magazine to reflect Hale’s editorial policies. She sometimes personally wrote some of the material published in the magazine.

During her years in Boston Hale also became involved in several social causes. Among these were the formation of the Seaman’s Aid Society to assist the surviving families of Boston sailors who died at sea and fund raising for the completion of the Bunker Hill Monument. She also supported Elizabeth Blackwell who would become America’s first female doctor.

Hale’s second book of poetry, Poems for Our Children, published in 1830, contained one of the most famous poems in the English language: “Mary Had a Little Lamb,” though its original title was “Mary’s Lamb.” The poem was intentionally written for children, an audience for which many women poets of this period were writing.

Difficult financial times forced the sale of the American Ladies Magazine to Louis Godey, the Philadelphia publisher of Godey’s Lady’s Book. He merged the two magazines and hired Sarah Hale as the editor. They forged a highly successful partnership that turned Godey’s magazine into one of the most successful of its day with 150,000 subscribers.

Despite the success of the magazine, its continuation was jeopardized by the economic difficulties of the 1830s. In early 1836 Hale was approached by Louis Godey, the Philadelphia publisher of Godey’s Lady’s Book, to edit his magazine, but she insisted on remaining in Boston while her youngest son was attending Harvard College, and declined his offer. When he later offered to buy American Ladies Magazine and install her as editor of the new combined magazine from Boston, she agreed.

She remained in this arrangement until 1841 when she moved to Philadelphia and made Godey’s Lady’s Book the leading American women’s literary and fashion periodical for the following four decades. Hale hoped the magazine would help in educating women, as she wrote, “not that they may usurp the situation, or encroach on the prerogatives of man; but that each individual may lend her aid to the intellectual and moral character of those within her sphere.”

Many female suffragists of the day scorned Hale because she did not support their cause. While she did not feel that women should be involved in politics, she worked tirelessly to promote her belief that females should be granted the same educational opportunities as males. She supported the founding of Emma Willard‘s Troy Female Seminary and persuaded her friend Matthew Vassar to hire a female administrator and many female instructors for his new school, Vassar College, in 1861.

Hale made a major contribution to American literature by choosing to publish original manuscripts and to copyright the magazine. Respected American male writers such as Edgar Allan Poe, Henry Wadsworth Longfellow and Ralph Waldo Emerson were among the contributors. Additionally, women writers, such as Lydia Sigourney, Lydia Maria Child and Catharine Sedgwick were heavily promoted. During Hale’s editorship, Godey’s published at least three special issues that included only female writers.

As a believer in women’s moral superiority, Hale urged women to write morally uplifting novels. She also used her position to advance the careers of women missionaries and teachers. In 1851, she founded the Ladies’ Medical Missionary Society of Philadelphia. The organization fought for a woman’s right to go to a foreign land as a medical missionary without the accompaniment of a man.

The promotion of women authors was her constant literary goal. Her most famous publication, Woman’s Record: or Sketches of All Distinguished Women, from the Creation to A.D. 1854, was one of the first biographical dictionaries devoted exclusively to American women writers. It included abridged selections from the writers’ works as well as short biographical sketches. She issued two subsequent editions of the text and in them featured many of the authors whose careers Hale had helped launch.

Hale’s editorship (1837-1877) made her one of the most influential American women of the mid-nineteenth century, an arbiter of taste in dress, architecture, and literature, and a publicist for women’s education, women’s property rights, professions for women, early childhood education, public health and other progressive causes.

Final Years
In later years, Hale particularly liked to publish fiction with American themes, the frontier, and historical fiction set during the American Revolution. She adamantly opposed slavery and was strongly devoted to the Union. She campaigned in her pages for a unified American culture and nation, frequently running stories in which southerners and northerners fought together against the British, or in which a southerner and a northerner fell in love and married.

Although Hale strove to educate and promote women, ultimately, Godey’s was too conservative with respect to the women’s rights movement to retain its position. When women’s rights gained support, the magazine began to decline. The literary level dropped in the 1850s and lost ground to vigorous imitators like Peterson’s Magazine, Atlantic, and Harper’s. After Hale resigned in 1877 the magazine floundered until it folded in 1898.

And now, having reached my ninetieth year, I must bid farewell to my countrywomen, with the hope that this work of half a century may be blessed to the furtherance of their happiness and usefulness in their Divinely-appointed sphere. New avenues for higher culture and for good works are opening before them, which fifty years ago were unknown. That they may improve these opportunities, and be faithful to their higher vocation, is my heartfelt prayer.

Sarah Josepha Hale died at her home in Philadelphia, on April 30, 1879 at age 90. She is buried in a simple grave in the Laurel Hill Cemetery.

Hale fell into obscurity after her death and for most of the twentieth century. Her work was mostly ignored until feminist scholars rediscovered her in the 1990s. Recent critics have viewed Hale as a writer and editor who had a great deal of influence, and her opinions on the role of women, slavery and morality have undergone serious study. Today, she is considered the most prominent American woman engaged in literary enterprise in the mid-nineteenth century.