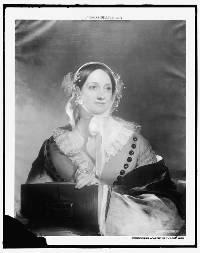 Writing under the name Miss Leslie, Eliza Leslie (1787–1858) was an American author of popular cookbooks. Her 1837 manual Directions for Cookery: Being a System of the Art, in Its Various Branches, was the most popular book of the 19th century, having gone through fifty printings. Her books on etiquette and domestic management brought her the greatest fame. She also wrote short stories and articles which were published in children’s books and women’s magazines.

Childhood
Eliza Leslie was born November 15, 1787 in Philadelphia, Pennsylvania, the daughter of Lydia Baker and Robert Leslie, a watchmaker who was a personal friend of Benjamin Franklin and Thomas Jefferson. She was the oldest of five children.

In 1793, Leslie and her family moved to England for six years, so her father could develop an export business in clocks and watches. A talented man, he was the chief influence on Eliza Leslie’s early intellectual life, encouraging her precocious reading ability and teaching her to write and draw.

Leslie loved to read, and advanced rapidly from children’s stories to reading literature. She wrote poetry at an early age, though by age fourteen became discouraged. She later stated, “I then for many years abandoned the dream of my childhood, the hope of one day seeing my name in print.”

After her return to the United States in 1800, she resided chiefly in Philadelphia. Her first compositions were in verse. When her father passed away in 1803, the family suffered financial hardship. They bore the burden cheerfully; she and her mother earned income by taking in boarders.

Literary Career
Possibly to improve the cooking at the boarding house, Eliza attended the first American culinary school, Mrs. Goodfellow’s cooking school in Philadelphia, in the early 1820s. Copying Goodfellow’s recipes for friends led to her first publication, Seventy-Five Receipts for Pastry, Cakes and Sweetmeats (1828) – one of the earliest American cookbooks – by “a Lady of Philadelphia.”

Like so many of her contemporaries, Leslie was motivated to put pen to page by her love of language and a desire to see her name in print, but also by financial necessity. Her writing was easy to follow, clear in its directions and distinctly American – an important attribute in the ambitious and proud young republic of the United States.

Her publisher, Mr. Francis of Munroe and Francis of Boston, urged her to try her hand “at a work of imagination” and soon published her first series of juvenile stories, The Young Americans; or, Sketches of a Sea-Voyage (1829), which was published anonymously.

The success of her stories in children’s books and women’s magazines encouraged her to publish under her own name. She began using the name ‘Miss Leslie‘ on her next work, American Girl’s Book (1831), and on all the juvenile stories, fiction, magazine articles, editorial work, etiquette guides and cookbooks to follow in the next twenty-five years.

In 1832, after obtaining a prize for her story “Mrs. Washington Potts,” which was published in the magazine, Godey’s Ladies’ Book, Leslie adopted literature as a profession. Her humorous writing style and knowledge of cooking, social manners and housekeeping made her books very popular for many years.

During the 1830s, Leslie served as editor for The Violet and The Gift, annual publications which included contributions from Henry Wadsworth Longfellow, Elizabeth Ellet, Lydia Sigourney and others. For a time, she was also Sarah Josepha Hale’s assistant editor at Godey’s.

Leslie produced most of her income through her books on domestic management, volumes such as Miss Leslie’s Behavior Book (1834), The House Book (1840), and Miss Leslie’s New Cookery Book (1857). Young wives who were separated by hundreds of miles from the guidance of their mothers and sisters looked to Miss Leslie for advice on cooking, etiquette and childrearing.

Leslie is best known for having written the most popular cookbook in nineteenth century America, Directions for Cookery, in its Various Branches (1837), which sold at least 150,000 copies. Her approach to cooking instruction, simple yet comprehensive, is inviting even to the modern reader.

Leslie writes in the Preface of Directions for Cookery:

The author has spared no pains in collecting and arranging, perhaps the greatest number of practical and original receipts that have ever appeared in a similar work; flattering herself that she has rendered them so explicit as to be easily understood, and followed, even by inexperienced cooks.

She included a number of relatively lavish dishes, such as “Rich Brown Soup”, which calls for six pounds of lean, boned beef and is “suited to dinner parties.” Yet also included are the labor-intensive methods for making butter and several kinds of cheese.

A sequel followed: The Lady’s Receipt-Book: A Useful Companion for Large or Small Families (1847). This marked a turn toward a more genteel audience. Half the book is dedicated to cleaning silver, laundering white satin ribbon, preserving white fur and oil-paintings, as well as tips for traveling by sea and writing a proper letter.

Later Years
During the final decade of her life, Eliza Leslie took up residence at the United States Hotel, where she became something of a Philadelphia celebrity. Holding court among the hotel guests, she was venerated by her admiring readers:

She had the reputation of a brilliant woman with a sarcastic wit and heady opinions who frequently offended strangers but was warmly affectionate to relatives and friends and generous to the needy.

During this time Leslie was writing a work about the life of John Fitch, who built the first steamboat in the United States in 1787. She reportedly suffered from being overweight, and could not walk easily.

Eliza Leslie died January 1, 1858, at the age of 70, and was buried in St. Peter’s Churchyard in Philadelphia.