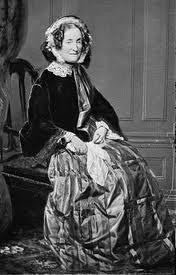 Her father’s wealthy employer, widow Mrs. Daniel Lathrop, took a liking to young Lydia and treated her much like a daughter. It was through this connection that she became a frequent guest of the Wadsworth family in Hartford, and the Wadsworths did much to further her literary career.

Lydia was educated in Norwich and Hartford. When her formal schooling ended, she was tutored in Latin and Hebrew and conducted classes for impoverished children, including African Americans. With her friend Nancy Maria Hyde, Sigourney opened a girl’s school in Norwich in 1811. The school was forced to close when Hyde became ill and was no longer able to teach.

After Mrs. Lathrop died, Daniel Wadsworth helped Lydia set up a school for girls in Hartford in 1814, arranging for daughters of his friends to attend. Instead of teaching such traditionally ‘feminine’ subjects as art and needlework, she taught reading, arithmetic, history, rhetoric, and natural and moral philosophy.

In 1815, with Wadsworth’s help, Lydia published her first work, Moral Pieces in Prose and Verse to critical acclaim. He arranged the publishing and performed the initial edit himself. Sigourney described Wadsworth as her “kind patron” and says that he “took upon himself the whole responsibility of contracting publishers, gathering subscriptions, and even correcting the proof sheets.”

Despite her success, she gave up teaching upon her engagement to Charles Sigourney, a prominent Hartford widower whom she married on June 16, 1819. She spent most of the rest of her life in Hartford. She continued to write, but her stern, conservative husband disapproved of her writing career, and the matter was long a source of conflict in their marriage. Lydia gave birth to five, but only two children lived to adulthood.

Her wish to publish prevailed, though usually anonymously, and she continued writing to support her favorite causes – war relief, temperance movements and missionary work. During the early years of her marriage, she not only published books but also contributed poems and prose pieces to over twenty periodicals, using the proceeds to aid her parents and support her charities.

Literary Career
However, in 1833 when she was referred to as the probable author of the advice book Letters to Young Ladies, By a Lady, she admitted authorship of the book. After that, she began to write openly as Mrs. Sigourney, and her output soared: in the first two years she produced nine volumes as well as many pieces for newspapers and magazines.

Her husband’s financial situation deteriorated, and it became a matter of necessity for Lydia Sigourney to write as an occupation. She was adept at negotiating contracts and obtaining remunerative terms for her work, taking advantage of the substantial royalties she received for The Girl’s Reading Book (1838) and The Boy’s Reading Book (1839) by arranging for their use in numerous schools.

However assertive Sigourney was, her activities always remained within the boundaries of feminine propriety of her era. Letters to Young Ladies argued that women should practice reading aloud, promoted the importance of being agreeable, and suggested ways to take notes, along with advice on how to paraphrase what one has read.

Prompted by its success and an increasing need for money, Sigourney allowed her name to be placed on later editions of the book, despite her husband’s objections. The popularity of this volume created new demand for her work, and, by 1839, she was able to support her household by writings published under her own name.

Her second conduct book, Letters to My Pupils, published in 1837, focused on pronunciation and conversation, and claimed that women should be trained in enunciation even if they were not going to be speaking publicly. According to Sigourney, women’s conversation should adhere to three rules: It should give pleasure; it should be instructive; and it should be comforting. She also made a case for the value of silence at times, and argued that part of a woman’s role is to be a good listener.

Sigourney was one of America’s most popular poets during the first half of the nineteenth century. Her celebration of religious and patriotic values, talent for writing commemorative poetry, and reputation for moral integrity strongly appealed to her contemporary public. A prolific author, Sigourney contributed widely to magazines and published numerous volumes of her work. becoming one of the first women in the United States to establish a successful and profitable career as a writer.

As her reputation grew, Sigourney was able to sustain her family with her writing and editorial work. She edited the annual Religious Souvenir in 1838 and 1839, and from 1839 to 1842 she is listed as an editor of Godey’s Lady’s Book, primarily for the prestige her name conferred on the magazine. A prolific contributor to periodicals as well as to annuals and gift books, Sigourney became familiar to a broad range of the reading public, reissuing much of her magazine verse in numerous collections and editions.

By the early 1840s, her popularity was so great that magazine editors vied for her contributions. In 1841, Edgar Allan Poe, then editor of Graham’s Magazine, requested material from her, and the editor of the competing Godey’s Lady’s Book paid her – purportedly five hundred dollars a year – for exclusive use of her name on the title page of his magazine.

Sigourney’s prestige as a writer was established, and on a tour of England she visited such figures as William Wordsworth, Joanna Baillie, Samuel Rogers, Thomas Carlyle and Maria Edgeworth; Sigourney would later recount these travels in Pleasant Memories of Pleasant Lands (1842).

Sigourney reached the height of her popularity with the publication of Illustrated Poems (1849), a lavish edition issued by respected publishers Cary and Hart. This was part of a series of works by American poets, the preceding volumes having been devoted to three highly regarded male writers, William Cullen Bryant, Henry Wadsworth Longfellow and N. P. Willis.

Sigourney was enormously popular, and enormously productive. A national figure, she was often courted by dignitaries and literary celebrities, and her works were anthologized in many collections of American prose and poetry. A shrewd businesswoman, she continued to publish at the rate of a book a year throughout the 1850s.

Unlike Romantic poetry, her poems use familiar language, often language associated with hymns and the Bible, to present events like the death of an infant or spouse as painful instances of humanity’s common fate. They also encourage readers’ compassion for others and urge them to draw religious conclusions from the contemplation of natural processes and historical events.

Sigourney’s beliefs also fueled her concern – quite unusual in her day – about white treatment of Native Americans. In her works on Native American history she treats whites’ conduct as a violation of Christian principles. One of her most successful poems, titled “Indian Names,” asks ‘How can the red men be forgotten, while so many of our states and territories, bays, lakes and rivers are indelibly stamped by names of their giving?’

Sigourney’s professional conduct was sometimes questionable. She presented literary notables as friends when they were mere acquaintances; and she published papers intended to remain private, including her son’s personal journals after his death. Nevertheless, she was always true to her sense of writing as a public service. She distributed many copies of her books gratis and published at least one at her own expense then gave away copies away.

Later Years
During the last years of her life, Sigourney composed few new writings, choosing instead to reissue retitled versions of earlier volumes. She had already established herself as a distinctly American and distinctly female poet and writer. Her influence was tremendous. Her commitment to education, writing and charity was a testament to women’s possibilities for self-betterment. According to one reviewer:

As a dedicated, successful writer, Lydia Sigourney violated essential elements of the very gender roles she celebrated. In the process, she offered young, aspiring women writers around the country an example of the possibilities of achieving both fame and economic reward.

Throughout her life she took an active interest in philanthropic and educational work. An early advocate for social reform in slavery and emigration as well, Sigourney felt obligated to use her position to help oppressed members of society. According to her autobiography, Letters of Life (published a year after her death), she wrote with the hope of ‘being an instrument of good.’

In her memoir, she estimates responding to two thousand letters annually and lists some of the curious requests she received from complete strangers. Numerous letters from readers attest to the consolation and sustenance her work provided her contemporaries, despite the low esteem in which public literature – and most women writers – have long been held.

Lydia Sigourney died at her Hartford home on June 10, 1865, after having prepared her autobiography, which was published the following year.

Since her death, Sigourney’s writings largely have been forgotten. When remembered, she has been criticized for being shallow or for catering to the society in which she lived, where women were expected to avoid public lives. Some have attributed her influence to her relationships with wealthy, powerful people of her day or to her good business sense.

She herself commented at the end of her life:

I think now with amazement, and almost incredulity, of the number of articles I was induced by the urgency of editors to furnish. Before I ceased to keep a regular catalogue they had amounted to more than two thousand.

Sigourney contributed thousands of articles to nearly 300 periodicals and published some 67 books. Not bad, I’d say, for the early nineteenth century, when women were often seen, but few were heard.