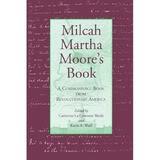 A commonplace book is a manuscript kept by an individual containing literary passages, quotations, recipes, poems, or passages from other sources that the individual thought worthy of recording.

Milcah Martha Moore (1740-1829) lived and flourished in the Philadelphia area during its peak, when it was the center of commerce, politics, social life, and culture in the young republic. A well-educated woman, Moore knew and corresponded with many of the leading intellectuals of her day. From her network of acquaintances, she created a commonplace book.

Early Life
Milcah Martha Hill was born on the island of Madeira to a well-connected family affiliated with the Society of Friends – Quakers – and was descended from some of the original Welsh settlers who had come to Pennsylvania in 1683.

The Hill family moved to the Delaware Valley sometime during Milcah’s youth, affording her many opportunities for circulating among family and friends between the greater Philadelphia area and Burlington, New Jersey.

She married Dr. Charles Moore, her cousin, in 1767. The Quakers did not favor kinship marriages between even distant cousins, and the couple were expelled from the Society of Friends, which caused some turmoil, but their reputation as a happy couple indicates the appropriateness of the match.

The friends who gathered around Moore in the 1760s and 1770s circulated their poetry and prose manuscripts among family and friends, a common practice at the time. Moore copied into her “Book” the writings of Susanna Wright, Hannah Griffitts, and Elizabeth Graeme Fergusson, and at least thirteen other members of the circle. These women established a precedent for the next generation of women who made the transition from manuscript circulation to print publication.

Moore compiled her commonplace book during the American Revolution, carefully selecting works that she and her friends most enjoyed reading and wanted to remember. Contained are 126 works of prose and poetry by at least sixteen different authors, mostly women. She also included writings by Benjamin Franklin, Patrick Henry, and Samuel Fothergill.

Moore’s Book is a treasure because it includes two of the most avidly sought-after bodies of writing from British America: sixteen new poems (twenty-four in all) by the Quaker Susanna Wright and a previously lost portion of the journal kept by Elizabeth Graeme Fergusson during her trip to England. The book served as a link between Quaker writers and those outside the Quaker community, who might not have otherwise read each other’s work.

Milcah Martha Moore herself wrote moral and instructive poetry. Her compilation, Miscellanies, Moral and Instructive (1787), published in London and Dublin as well as in America, enlarged her reputation as a teacher and writer.

Moore’s Book is the richest surviving body of evidence revealing the nature and substance of women’s intellectual community in British America. The quality of the writing is high and reflects a range of literary genres including religious and meditational poetry, elegies, verse epistles and extempore verse, hymns, occasional poems, letters, and journal writing.

Topics range from family and friends to religion and mortality, to politics and war — belying the notion that women’s concerns were limited only to a domestic sphere. Taken as a whole, Moore’s collection presents an unparalleled view of the interests and tastes of educated women in early America.

After her husband died in 1801, Milcah Martha Moore rejoined the Quakers, and lived in Burlington, New Jersey, until her death.