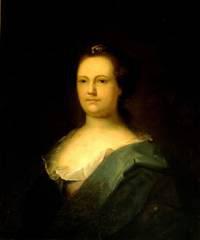 Deborah Read Franklin played an important role in the founding of the United States simply by taking on the management of her family businesses. By so doing, she allowed her husband, founding father Benjamin Franklin, the opportunity to actively pursue his role in state and national politics in the decades before and after the American Revolution.

Deborah Read was born about 1707 to John Read, a British carpenter, and his wife Sarah White Read. Whether Deborah was born while her parents still lived in England, or after they moved to Philadelphia, Pennsylvania, is uncertain. The second of seven children, Read received little formal education. Almost nothing else is known about her childhood.

Benjamin Franklin was born on January 17, 1706, in Boston, Massachusetts. He was one of seventeen children born to Josiah Franklin, a soap maker. Josiah wanted Benjamin to enter the clergy, but could not afford to send him to school. Consequently, when Benjamin was 12, he became an apprentice for his brother James who was a printer.

In 1723, Benjamin ran away and eventually ended up in Philadelphia, Pennsylvania, where he met Deborah Read. While in Philadelphia, Franklin became a boarder in the Read household, and soon found work as an apprentice printer.

Franklin became an excellent printer, and the governor of Pennsylvania asked him to go to London to purchase font types and printing supplies. In exchange for his services, the governor promised to help Franklin start his own printing business.

In the meantime, Franklin and Deborah had grown very close, and she had begun to suggest they should get married. He was unsure what to do, and left for England. Unfortunately, the governor had lied, and Franklin was forced to work in London for several months.

Franklin rarely wrote while he was gone, and in 1725 Deborah Read’s mother persuaded her to marry John Rogers, a local potter, but the unhappy union soon ended. There were rumors that Rogers already had a wife in England.

Upon his return to Philadelphia, Benjamin Franklin borrowed money and started his own printing business. He worked extremely hard and soon received government printing contracts. His business was very successful, and he became well known throughout Philadelphia.

In 1729, Franklin bought the Pennsylvania Gazette and turned it into the most successful newspaper in the colonies. His newspaper contained the very first political cartoons.

Franklin asked Deborah to marry him, but she said that a new marriage was out of the question as long as there was any chance that John Rogers might reappear – they could have been charged with bigamy. On September 1, 1730, the couple entered into a common law marriage, agreeing to live together as husband and wife without formal approval by religious or civil authorities.

In 1733, Franklin began to print Poor Richard’s Almanac. While most almanacs of the time contained weather reports and other predictions, his Almanac contained lively writing, interesting facts, and creative sayings – many which are still used today. “A penny saved is a penny earned” came from this almanac.

Children
Deborah Franklin gave birth to two children. Their first child, a boy, named Francis Folger Franklin died in 1736 at age four of smallpox, a contagious disease that causes fever, vomiting and skin eruptions. Their daughter Sarah was born in 1743.

Sarah married Richard Bache on October 29, 1767, and moved into her parents’ recently completed house. The Baches lived there for twenty-five years and raised their seven children there, enjoying the generosity of her parents. Sarah served as housekeeper after her mother died, and later was hostess and caregiver for her father when he returned from France in 1785.

Deborah Franklin did not share many of Benjamin Franklin’s intellectual, scientific, or political interests, and, unlike him, she was uncomfortable in social situations. She enjoyed being a homemaker and had a good head for business. While her husband ran their printing business, she was in charge of the couple’s book and stationery shop as well as a general store.

When Franklin spent the years of 1757 to 1762 and 1764 to 1775 in Europe as a representative of the government of Pennsylvania, Deborah Franklin stayed in Philadelphia. She had no wish to cross the ocean. Some say she feared that her plain appearance and simple ways would embarrass her husband in front of his elegant European companions.

By 1757, Benjamin Franklin, next to George Washington possibly the most famous 18th-century American, had made a small fortune, had established the Poor Richard’s Almanac as an oracle on how to get ahead in the world, and had become widely known in European scientific circles for his reports about his electrical experiments and theories.

Furthermore, he was then just beginning a long career as a politician, during which he would be chief spokesman for the British colonies in their debates with the king’s ministers about self-government. 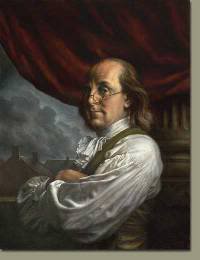 In 1757, Franklin was sent to England to petition the king for the right to levy taxes. He remained in England for the next five years, as the representative of the American colonies. Franklin returned to England in 1764 as an agent of Pennsylvania, to negotiate a new charter, and remained until 1775.

In 1765, the British government, in an effort to raise money to pay off its war debts, imposed the Stamp Act on the American colonists, forcing them to pay a tax on each paper item they used. On September 17, 1765, a number of Philadelphia citizens threatened to attack Deborah Franklin’s house, protesting that her politician husband had not fought against the Stamp Act vigorously enough.

Franklin was in England. With the help of some armed relatives, she told the crowd she would not allow herself to be forced from her own home. Soon the angry mob retreated, leaving the house in peace.

Because of the great assistance Deborah provided him, Benjamin Franklin had the luxury of retiring from business early and devoting himself to a career in public life. But it also allowed him to spend many years in Europe without her. The couple sent frequent letters back and forth that mostly focused on personal matters. Only in their later years did the letters become quite brief and businesslike, reflecting their growing lack of closeness.

Around 1773, Deborah began experiencing health problems. Franklin was in England, trying to keep peace between America and England, and he was unable to return to the colonies. In 1774, he wrote her a letter in which, for the first time, he used the tender term “my dear Love,” but she was too ill to respond or even acknowledge it.

Her fear of ocean voyages had prevented Debprah from traveling with her husband, so she spent many years alone. She died unexpectedly of a stroke on December 19, 1774 in Philadelphia, while Franklin was in England.

Three months later, Benjamin Franklin returned to America. He wrote to a friend about his wife of many years:

I have lately lost my old and faithful Companion; and I every day become more sensible of the greatness of that Loss; which cannot now be repaired.

In 1775, with war seemingly inevitable, Franklin returned to America. Shortly thereafter, he was made a member of the Second Continental Congress and helped draft the Declaration of Independence.

He would have a hand in securing financial and military aid from France during the American Revolution, the negotiation of the treaty by which Great Britain recognized its former 13 colonies as a sovereign nation, and framing the Constitution, which for more than two centuries has been the fundamental law of the United States of America.

Benjamin Franklin was bedridden during the final year of his life, escaping severe pain only by the use of opium, and he died on April 17, 1790, at age 84. He was buried beside Deborah at Christ Church Cemetery in Philadelphia.