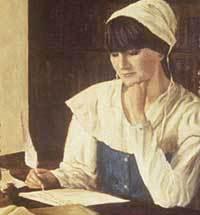 Cornelia Smith Bradford took over the Philadelphia print center of Andrew Bradford at his death in 1742. She took on a partner, and continued the business through the partnership of “Isaiah Warner & Cornelia Bradford” until October, 1744. Then Cornelia resumed the operation until at least 1751.

Andrew Bradford was born in Philadelphia, Pennsylvania, the son of William Bradford and Elizabeth Soules. His father probably came to America from Leicestershire, England, with William Penn and his company in 1682. William Bradford then moved his family to New York in 1693, and was there appointed Royal Printer. He established the New York Gazette in 1725, which was believed to be the first newspaper printed in the colonies.

Andrew Bradford learned the printer’s trade from his father and worked as his partner in 1707 and 1708. In 1712, he established a printing business in Philadelphia. In 1719, Andrew launched the first newspaper in Philadelphia and in the Middle Colonies, the American Weekly Mercury.

In 1727, Andrew became a member of the common council and was postmaster of Philadelphia from 1728 until 1732. The post office was located inside his store, The Signe of the Bible. Andrew married Cornelia Smith in 1739.

Benjamin Franklin boarded with Bradford while still a journeyman printer during his first visit to Philadelphia. In 1729, the Mercury published six of Franklin’s Busy-Body Papers, a series of contributions from Benjamin Franklin that so offended the governor and council that they sent Bradford to prison for a time, but he was not there long.

Bradford printed three or four almanacs annually, and in 1741 published a periodical entitled, The American Magazine or Monthly View of the Political State of the British Colonies. In the process, he became quite wealthy.

The colonial political and legal system emphasized traditional male authority. A significant number of women are first listed in printed sources just after the deaths of husbands who were members of the printing trade. By vesting a married woman’s property rights in her husband, the legal system rendered the role of women in the trade publicly invisible until his death.

Among all firms engaging in print communications in the colonial era and the Early Republic, one group comprised only males. A second group, where the business’s principal owner was married, comprised males and females. The firm was usually a family centered workplace. In these instances, wives and female as well as male children worked actively in its various branches. Females were as normal a part of a printing office as other workers.

Upon the husband’s death, a normal official action of a widow was to take over the firm. Her name immediately appeared in the newspaper or on an imprint, often with an assurance to customers that the firm would continue operations. The key point is that, in a much larger share of firms in business through 1820 than is represented here, women played a publicly invisible but privately active and often prominent role.

Andrew Bradford died in 1742, and left his wife real estate and other businesses. Cornelia didn’t have to continue running the print shop, but she edited and published The American Weekly Mercury, which was a full-fledged print center, until 1744 with the help of one assistant. She also managed the office and issued an almanac.

After 1744, Cornelia became the sole editor and printer of the newspaper until 1746, when it was taken over by William’s nephew’s paper the Pennsylvania Journal and Weekly Advertiser. Cornelia continued to run a bookstore and bindery until at least 1751.