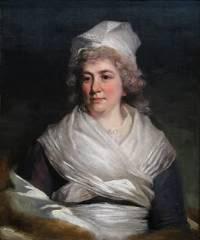 Sarah Franklin was born to Benjamin Franklin and Deborah Read Franklin at Philadelphia on the eleventh day of September, 1744. Sarah, known as Sally throughout her life, had a typical education for a girl of her status in eighteenth-century Philadelphia. She had a great love of reading and music and was considered a skilled harpsichordist.

In 1764, Sally had to part with her father when he was sent to Europe for the first time as a representative of the Colony. The people of Pennsylvania were at that time divided into two parties – the supporters and the opponents of the proprietors, the managers of the colony. William Penn’s sons had left their father’s religion – the Quakers – and joined the Church of England, the religion of most of the proprietors. The many Quakers were in opposition.

After having been a member of the Assembly for 14 years, Benjamin Franklin lost his election to that body in the autumn of 1764, by a few votes; but his friends were in the majority in the House, and immediately elected him the agent of the colony to England.

Marriage
On October 29, 1767, Sally married Richard Bache in spite of her family’s misgivings about his financial situation. It was Franklin’s wish that Sally not marry Bache until his financial situation stabilized out of fear that Bache was only marrying for money. Nevertheless, Sally was devastated and Deborah Franklin allowed the wedding to take place against Franklin’s wishes.

After their marriage, Mr. and Mrs. Bache appear to have resided with Mrs. Franklin in the house built by her in the year 1765. Deborah Franklin died on December, 19, 1774, having been attacked by paralysis four days previously. The mansion house continued to be occupied by the Bache family.

It was not until Sally gave birth to her first child, and Benjamin Franklin met Richard Bache that he truly accepted the marriage. Bache never became a successful businessman, though Franklin gave the couple several loans and helped them set up several stores in Philadelphia. Benjamin Franklin had to support Sally and her family that included eight children for the rest of his life.

Political Life
Sally Bache, a Revolutionary War Patriot, led an active public life according to the standards of womanhood in the late eighteenth century. As the daughter of Benjamin Franklin, she had an unusual access for a woman to the political life in revolutionary Philadelphia. Although her primary role was caretaker of her family and home, she played an active role in the Revolution through her relief work and as her father’s political hostess.

Sally closely followed the events leading up to the revolution and through her relief work supported the war by raising money for the Continental Army. The approach of the British army through New Jersey in December, 1776, induced Mr. Bache to remove his family to Goshen township.

In a letter to her father, she wrote of their new location:

We are still about twenty-four miles from Philadelphia, in Chester County, the next plantation to where Mr. Ashbridge used to live. We have two comfortable rooms, and we are as happily situated as I can be separated from Mr. Bache; he comes to see us as often as his business will permit. Your library we sent out of town well packed in boxes, a week before us, and all the valuable things, mahogany excepted, we brought with us.

There was such confusion that it was a hard matter to get out at any rate; when we shall get back again I know not, though things are altered much in our favor since we left town. I think I shall never be afraid of staying in it again, if the enemy were only three miles instead of thirty from it, since our cowards, as Lord Sandwich calls them, are so ready to turn out against those heroes who were to conquer all before them, but have found themselves so much mistaken; their courage never brought them to Trenton, till they heard our army were disbanded.

Mrs. Bache returned home with her family shortly after, but in the following autumn the approach of the British army after their victory on the Brandywine, again drove them from Philadelphia. On the 17th of September, 1777, four days after the birth of her eldest daughter, Mrs. Bache again left town, taking refuge at first in the hospitable mansion of her friend Mrs. Duffield in Bucks County. They moved again to Manheim Township in Lancaster County, where they remained until the evacuation of Philadelphia by the British forces. Sally didn’t return with the children until October 1778.

Sally is best known for her involvement in the Ladies Association of Philadelphia. She took over leadership of the association in 1780 and supervised the sewing of 2200 shirts for the American soldiers, often meeting at The Cliffs, a country estate owned by Samuel Fisher on the Schuylkill River, two miles north of Philadelphia.

In 1785, Benjamin Franklin returned to Philadelphia and spent his remaining years in the care of Sally and her family, and with the descendants of the friends of his early years, most of whom he had survived. When Franklin died, he left most of his estate to Sally and her husband, including a miniature portrait of Louis XVI surrounded by diamonds, which she sold, against his wishes, to finance a trip to London.

In 1794, Richard gave up his commercial pursuits, and the family moved to a farm outside Philadelphia on the Delaware River, sixteen miles above Philadelphia. There they spent thirteen years, making their residence the seat of hospitality.

In 1807, Sally was attacked by cancer and returned to Philadelphia in the winter of 1807-8, for medical care. Her disease was incurable, and on October 5, 1808, she died at the age of sixty-four. Her remains, with those of her husband, who survived her only a few years, are buried in the Christ Church Burial Ground in Philadelphia, beside those of her parents.