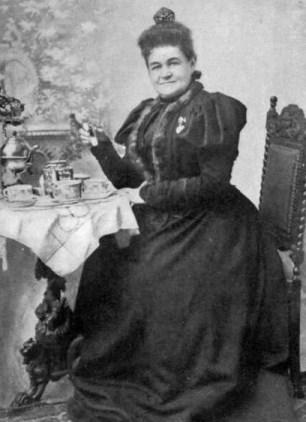 Novelist and Author of Domestic Manuals

Mary Virginia Terhune (1830–1922) was an American author of novels, short stories, biographies, travel narratives, cookbooks and domestic manuals whose career stretched across seven decades. She began her career writing articles at the age of 14, using various pen names, until 1853 when she settled on Marion Harland. Her first novel Alone sold more than 100,000 copies.

Born December 21, 1830 in Dennisville, Virginia, Mary Virginia Hawes was the third of nine children born to Samuel Pierce and Judith Anna Smith Hawes. Terhune was home schooled until 1844, when her family moved to Richmond, Virginia, where she attended a girl’s seminary school for two years of formal education.

Early Literary Career
Mary was an avid reader who turned her love of literature to profit at an early age. At age fourteen, she began writing articles and poetry for area newspapers under various male-sounding pseudonyms. Her real interest lay in fiction writing, but she was initially unsuccessful in selling her works to magazines. At age fifteen, her essays were accepted by The Watchman and Observer, a weekly religious magazine published in Richmond.

At sixteen, Mary secretly began work on her first novel, while continuing to submit stories to magazines and newspapers. In 1853, she won a contest held by The Southern Era with her serial novel, Kate Harper, and she chose the pen name Marion Harland, under which she would write for the rest of her life. Her first novel Alone (1854) was published when she was twenty-four; the book was instantly popular.

With the publication of Alone, which sold 100,000 copies, her career as a writer became firmly established, and she was soon recognized as one of the top-selling authors of women’s fiction. Her early novels all featured a romantic story element, with many also including “sensational episodes – murders, fires, accidents and sudden deaths.”

Marriage and Family
Around the same time, she met a young Presbyterian minister, Edward Payson Terhune, with whom she felt a mutual attraction. Hawes did not at first want to marry a clergyman due to the “duties and liabilities” pressed upon a minister’s wife. After Terhune moved to Charlotte Court House, Virginia to assume leadership of a small church, he continued to court her.

Mary married Edward Payson Terhune September 2, 1856. During the first sixteen years of marriage, she gave birth to six children, but three of them died as infants. Mary dealt with her pain by turning to her writing. She continued writing fiction, publishing at least a novel a year and monthly episodes of serial works in newspapers or magazines.

These early works explored a variety of topics, but Terhune later delved into depravity, alcoholism, drug addiction and mental illness. Literary critics considered her to be a “plantation novelist” at the time. Recent critics have appraised her differently, noting that she was critical of various social institutions considered acceptable in the South, including slavery and marriages between close relatives.

The Terhunes moved to Newark, New Jersey in February 1859, after Edward accepted a position there to be closer to his aging father. They remained there for the next eighteen years. A few years after their move, the Civil War (1861–1865) cut Mary off from her family, including her brothers who fought for the Confederacy (she supported the Union).

These inner conflicts were often expressed in her fiction. Her earlier novels portrayed Virginia as an idyllic place, and its inhabitants as paragons of virtue and conduct, coexisting peacefully in a near utopia. A later novel, Sunnybank (1866), describes the many privations and dangers of wartime Virginia, and begins to explore the conflicts in Southern society at that time.

In some of her later novels, which are set in the North, she focused on providing good moral lessons through her fiction. A prolific author throughout her marriage, from 1862 to 1874 Terhune published a story every month in the magazine Godey’s Lady’s Book, which enjoyed a circulation of 100,000 to 200,000 subscribers. Between 1857 and 1873, she also published fourteen novels.

From Fiction to Domestic Manuals
During Terhune’s first months in Newark, struggling for the first time with household tasks such as cooking and cleaning, she realized there was a serious need for detailed, practical manuals for maintaining a household. This excerpt from Marion Harland’s Autobiography; The Story of a Long Life explains just how little she knew about keeping a home:

I was as unlearned as the babe unborn in everything that a practical housekeeper should know. I could not make a batch of bread, or boil a potato, or broil a chop, had my eternal welfare – or my husband’s happiness – depended upon it. As for soup-making, roasting, stewing, and boiling meats, frying and baking fish – the very commonest and coarsest rudiments of the lore in which I was supposed to be proficient – I was as idiotically void of comprehension as if I had never heard of a kitchen.

How I maintained a brazen show of competency is a mystery to me at this distance from that awful trial-period. I studied my quintette of cook-books with agonized earnestness. And when I was tolerably positive that I had mastered a recipe, I “went and did it” with Squeersian philosophy. How many failures were buried out of the sight of those who loved me best, and were most constantly with me, would have shocked the frugal housewife into hysterics. My mastery of this and of that process was painfully slow, but it began to tell upon our daily fare…

After finding current cookbooks less than helpful, she began collecting her own tested recipes, written in a more accessible manner. Against the advice of family and friends, who were concerned about her publishing outside her normal realm, she began soliciting housekeeping tips.

Terhune’s response to her perceived need for a good housekeeping manual was Common Sense in the Household: A Manual of Practical Housewifery (1871), a cookbook and domestic guide for housewives. Described by one author as “enlivened with pungent commentary,” this book and others of its kind that followed made Marion Harland a household name. In this excerpt she encourages her readers to believe in themselves:

You must learn the rudiments of the art yourself. Practice, and practice alone, will teach you certain essentials. The management of the ovens, the requisite thickness of boiling custards, the right shade of brown upon bread and roasted meats, these and dozens of other details are hints which cannot be imparted by written or oral instructions. But, once learned, they are never forgotten, and henceforward your fate is in your own hands. You are mistress of yourself, though servants leave. Have faith in your own abilities. You will be a better cook for the mental training you have received at school and from books.

The Practical Housewifery manual quickly became a best seller, going through ten printings in less than a year, and earning Terhune more than $30,000 in royalties. It was reprinted in French, Spanish, German and Arabic. During its first ten years, it sold 100,000 copies, and according to a 1920 article in Ladies Home Journal, it would go on to sell over one million.

Terhune’s son Albert was born December 21, 1872 on her forty-second birthday, and she referred to him as the “greatest gift” she had ever received. The following year, she was diagnosed with tuberculosis, and the family relocated to Europe for two years while Mary recovered. After their return, they continued living in the northeastern United States, moving as her husband’s job demanded.

Though Terhune continued writing novels, she began to concentrate primarily on non-fiction, publishing additional cookbooks and domestic works, as well as biographies, travel guides and histories. She was also a daily syndicated newspaper columnist and editor of several popular 19th century periodicals, including the magazine Homemaker which she established in 1888, and she was the first woman elected to the Virginia Historical Society.

After her shift to more non-fiction works, her occasional novels and short stories continued to examine contemporary issues women dealt with in their daily lives. One of her best-known works from this period was the novel The Hidden Path. While novels she wrote during this time were criticized for lacking believability and drawing out the heroine’s suffering, her first fourteen novels were reprinted and continued to be top sellers well after her death.

Terhune well understood the literary market and how to write what would sell to her audience. Her shift to non-fiction in the 1870s came after the end of the Civil War, when the demand for women’s fiction began to drop. With her new domestic writings, she appealed to inexperienced young housewives’ need to know how to cook and manage their households.

Her recipe books included a range of styles of dishes from around the country, that also responded to the differing resources of her readers. Once her domestic authority was established, Terhune became a Chautauqua lecturer, speaking primarily to women on topics of home and family. By the 1890s, her name guaranteed high sales, and toward the end of her life, she wrote a syndicated advice column.

Her works on cooking, housekeeping and etiquette all celebrate “the talent of home-making, precious and incommunicable,” as she described it in The Secret of a Happy Home (1896). Though Terhune made it clear that women were duty-bound to keep a well-ordered home, she also recognized and lamented the limitations placed on women:

It must be a fine thing to be a man on some accounts; to be emancipated forever-and-a-day from the thralldom of skirts for instance, and to push through a crowd to read the interjectional headlines upon a bulletin board, instead of going meekly and unenlightened home.

In the face of these challenges, however, Terhune urged her readers to develop their other talents and their intellects. After she broke her wrist in her seventies, she learned to use a typewriter and wrote Marion Harland’s Autobiography in which she reminisced about the pre-Civil War South where she was raised.

Some of Terhune’s other works include books based on extensive travel in Europe and the Middle East, biographies of Mary Washington, mother of George Washington, and British novelist Charlotte Bronte, and histories of colonial America.

Late Years
The Terhunes moved to Springfield, Massachusetts after Edward was transferred there. They moved again in 1884, to Brooklyn, New York, where Edward successfully revived an ailing parish, at the cost of his own health. He died on May 25, 1907, a year after they celebrated their golden anniversary.

Despite going blind in her late eighties, Terhune continued writing by dictating to a secretary, completing numerous magazine articles and essays and what would be her final novel, The Carringtons of High Hill, which was published in 1919, when she was eighty-eight. That year she also began a new series of articles about her childhood for The Ladies Home Journal.

Mary Virginia Hawes Terhune died June 2, 1922 in her New York City home at the age of 91. Her obituary was published in numerous papers.

Terhune passed her love of writing on to her surviving children, all of whom became writers, and she collaborated on writing projects with each of them. Two of her children, Christine Terhune Herrick and Albert Payson Terhune, became noted writers, with Herrick followed in her mother’s footsteps as an authority on domestic matters.

Terhune wrote a cookbook with eldest daughter Christine Terhune Herrick and an etiquette book with younger daughter Virginia Van de Water, who was less well known. She wrote a novel with Albert, who inherited his mother’s drive and productivity. Albert Payson Terhune became the most noted of her children, and is best known as the author of Lad: A Dog (1919), which is based on the life of his real-life collie.