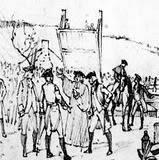 Backstory
In November of 1774, Colonel David Mason was commissioned by the Patriots of the Massachusetts Committee of Safety as an artillery officer. He had some experience in this during the French and Indian War at Fort William Henry. At the end of the war in 1763, he had formed an artillery company in Boston, Massachusetts. He had bought 17 old French cannon, 12-pounders, and was having them refit and mounted on carriages in Salem, Massachusetts.

Mason had been actively engaged in collecting military stores and making secret preparations for the approaching war, which then appeared inevitable. He purchased a number of cannon, which he committed to the care of Captain Robert Foster, a blacksmith, to affix the iron work to the carriages, and have them otherwise properly prepared for the service of resisting British aggression.

Captain Foster’s workshop was on the north side of the North River, over which there was a drawbridge, and the cannon were secreted in and about the premises as securely as possible. About the last of February 1775, a number of these carriages were completed and the guns were mounted. Five thousand flannel cartridges were also prepared for these cannon by the wife and daughters of Colonel Mason.

Leslie’s Retreat
An informant alerted British General Thomas Gage at Boston of Mason’s activity, and Gage made immediate plans to capture the cannon. On a cold New England Sunday morning, he sent a contingent of 240 troops under Colonel Alexander Leslie to embark onboard a transport, land at Marblehead, and from there march to Salem and take possession of the rebel cannon in the name of His Majesty. They chose Sunday, because they thought it would catch the Puritans in their Meetinghouse at Sunday services.

The British troops arrived at Marblehead on Sunday, February 26, 1775, and the column marched to Salem as fast as possible. Their plan to rely on a Sabbath surprise was thwarted by the citizens of Marblehead, who quickly spread the alarm to Salem. The cry of, “The foe, the foe, they come!” was heard throughout the town, and a prearranged drum beat just outside the Meetinghouse door, and crying out, ‘To arms! To arms!'”

Bells were rung and drums were beat to spread the alarm as far and wide as possible. Colonel Mason mounted his horse and rode with all speed to secure the cannon. Some of the guns were conveyed to Buffum’s Hill, where some of the guns were hidden in a thick woods. Others were moved to Danvers, and buried in a gravel pit.

At least in part, this urgent call to arms was provoked by the jealous watchfulness of other Americans in Salem. These were Tories, men and women who were loyal to King George III. Some of these, spies according to their Whig neighbors, had revealed the exact location of the hidden cannon to General Gage, commander-in-chief of His Majesty’s forces and military governor of the Massachusetts Bay Colony.

The British regulars marched briskly in the biting cold toward Salem, with the drum and fife corps playing Yankee Doodle. They planned to cross the bridge over the North River at Salem, find the cannons and destroy them, but they met the people of Salem at the North Bridge. Many were armed, most were angry and all appeared resolved that the Redcoats would not cross this bridge.

After the removal of the guns, Colonel Mason rode into town to watch the movement of the troops. There was no doubt in the minds of the people as to the real purpose of this visit – if the lanterns, hatchets, pickaxes, spades, handspikes, and coils of rope with which the regiment were equipped, had not already given them away. Mason immediately returned to his post on the north side of the bridge.

As soon as the British soldiers came in sight, the northern leaf of the drawbridge was raised to stop their progress. The people had collected on the north side of the river, and calmly awaited their approach. On the opposite side of the North River, minutemen from Salem and Danvers stood armed with everything from muskets to pitchforks and clubs, along with the militia, defiantly facing the British.

When faced with the resolution of the Salem residents, Leslie was urged by his lieutenants to fire on the crowd. At that moment, Captain John Felt was unable to hold his peace any longer. He shouted at Leslie in a voice that was unmistakably heard by civilian and soldier alike, “If you do fire, you will all be dead men!”

Colonel Leslie had become thoroughly convinced of the determination of the inhabitants to resist a forcible passage over the bridge, and he conferred with his officers. Still unwilling to abandon the mission, he advanced and said to the by-standers, “I am determined to pass over this bridge before I return to Boston, if I remain here until next autumn.”

Captain Felt, to whom this remark was addressed, answered that “nobody would care for that.” The Colonel replied, “By God, I will not be defeated;” to which Felt coolly answered, “You must acknowledge that you have been already baffled.” And then was heard a firm but gentle voice, telling Colonel Leslie not to fire “upon these innocent people.” Leslie turned around and inquired “who are you, sir?” The man replied, “I am Thomas Barnard, a minister of the Gospel and my mission is peace.”

The Colonel complained that his soldiers were insulted, and expressed his determination to cross the bridge, saying he was upon the King’s highway and would not be prevented from passing freely over it. An old man replied “it is not the King’s highway, it is a road built by the owners of the lots on the other side, and no king, country or town has any control over it.”

Almost an hour and a half had been consumed in the fruitless attempt to pass the bridge, and the day was fast drawing to a close. Mason on the northern side of the bridge was standing on a ladder at the top of the leaf, where he could address Leslie, with whom he was personally acquainted. A conference was held, in which Felt, Barnard, and Mason participated.

This conference resulted in Leslie’s pledging his word that if the inhabitants would allow him to march in a peaceable manner not above fifty rods beyond the bridge, he would then return, without molesting any person or property. His orders were to pass the bridge, and he could not disobey them. Intercession was made with the people, by Mason and others, that they should accept these terms.

The inhabitants, who were not prepared to enter into the conflict, including the women who always proved themselves in these times which tried men’s souls, assembled on a hill, where they could see all that was happening at the bridge, and they cheered, waved handkerchiefs and other tokens of encouragement to their husbands, fathers and brothers engaged in the melee.

There was scarcely any danger in allowing the troops to pass, for the guns had been secured and placed beyond their reach. The preliminaries settled and the distance which the regiment was to march beyond the bridge accurately ascertained, the drawbridge was lowered, and the troops quietly passed over.

Tarrant’s Challenge
The feelings of the inhabitants, including those of the gentler sex, were highly excited by the appearance of British troops in their streets on the Sabbath, and while the soldiers were in the act of turning for their return march, a nurse named Sarah Tarrant, in one of the houses nearby, peered out of an upstairs window.

“Go home and tell your master he has sent you on a fool’s errand, and has broken the peace of our Sabbath; what! do you think we were born in the woods, to be frightened by owls?” Sarah shouted at the Redcoats. (This was a common expression of the time that was meant to indicate that the speaker was accustomed to danger and could not be easily frightened.)

When one angered British trooper raised his weapon and took aim at her, she exclaimed, “Fire if you have the courage, but I doubt it!”

No shots were fired, and Leslie then retreated to his transport, and sailed back to Boston empty-handed. His conduct did not meet with the approval of his superiors, and for the failure of this expedition he was tried by a court martial, but was afterwards restored to his former rank.

There were eight military companies in Marblehead at that time, comprising nearly the whole male population, between sixteen and sixty years of age. They had all promptly assembled, and were ordered to station themselves behind the houses and fences along the road, prepared to attack the British on their return from Salem if hostile measures had been used by them. If no act of violence upon the persons or property of the people was committed, they were ordered not to show themselves, but to allow the British detachment to return unmolested to their transport.

The failure of this expedition should have convinced the ruling powers of the unconquerable spirit of the people, and their resolution to defend their just rights and privileges.