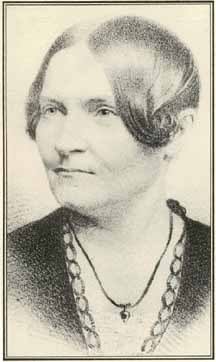 Lydia Maria Child was a women’s rights activist, abolitionist, Indian rights activist, author and journalist. Her journals, fiction and domestic manuals reached wide audiences from the 1820s through the 1850s. Her writings were inspired by a strong sense of justice and love of freedom.

Born in Medford, Massachusetts, in 1802, Lydia Maria Francis was the youngest of six children. Her father was a baker famous for his Medford Crackers. She liked to be called Maria. Though the home atmosphere reflected her father’s strict Calvinist beliefs, she was greatly influenced by her very intelligent older brother, Convers.

In 1814, after the death of her mother and the marriage of her favorite sister Mary, her father decided Maria would be better off in Mary’s new home in Norridgewock, Maine. She helped with household chores but continued to read, study, and correspond with her brother. She also visited a nearby Penobscot settlement, beginning a lifelong interest in Native Americans.

In 1819 Lydia took a teaching position in Gardiner, Maine. After a brief teaching career, Maria went to live with her brother Convers – a Harvard graduate and a Unitarian minister – and his wife at his parish in Watertown, Massachusetts, where she began to write a novel. She wrote: “I was gravely warned by some of my female acquaintances that no woman could expect to be regarded as a lady after she had written a book.”

Literary Career
Hobomok: A Tale of Early Times, published in 1824, dealt with the then scandalous notion of an Indian warrior in love with a white woman, and received attention because it portrayed Native Americans in a sympathetic light.

The story told of a colonial New England girl whose fiancé was lost at sea. She then turned for support to a sympathetic Native American, lived with him in his village, and bore his son. When her English lover returned, Hobomok nobly encouraged her to marry her fiancé, who adopted the half-breed boy.

Though the novel was published anonymously, it was soon discovered that Maria was the author, and she became an instant celebrity. Soon Maria Francis was welcomed into New England and Boston literary circles. In 1825, she published her second historical novel, The Rebels, or Boston before the Revolution. In 1826, she founded a bimonthly magazine for children, Juvenile Miscellany.

Maria became a literary sensation. She was invited by the governor to the reception for Lafayette and entertained by Boston’s elite in the grand houses of Beacon Hill. She became acquainted with other women in New England’s intellectual community, like Margaret Fuller, the Peabody sisters, and Maria White Lowell.

Maria Child also met a Harvard graduate and lawyer, David Lee Child, who was eight years her senior, but that didn’t seem to bother her. David was the editor and publisher of the Massachusetts Journal. He also had political interests, and served briefly in the Massachusetts State Legislature and often spoke at local political rallies.

While Maria and David shared middle-class backgrounds, the struggle for financial stability and intellectual interests, in some ways they were very different. She was frugal where he was extravagant. She was more sensual and romantic than he was. She was drawn to the aesthetic and mystical, while he was most comfortable in the world of reform and activism.

Her family was aware of David’s indebtedness and reputation for poor financial planning, and they opposed the marriage. But Maria’s success as an author and editor quelled any doubts she might have had, and they were married in 1828.

After their marriage, he drew her into his political interests, and she began to write for his newspaper. A regular theme of her columns and children’s stories was the mistreatment of Indians by early New England settlers.

The following year Maria published The Frugal Housewife, describing her ingenious methods of making do with little means. The popularity of the book helped to keep the household afloat as the couple moved from one temporary home to another.

David was an idealistic young man. A firm abolitionist and believer in women’s rights, he was proud of his wife’s achievements and never limited her freedom to write or work, as many husbands of the period might have.

Theirs was a loving marriage of like minds in political matters, but David’s ardor for good causes drew him into one impractical venture after another, and they always seemed to turn out badly. His editorial opinions got him sued and even jailed on more than one occasion. Out of necessity rather than choice, Maria was the breadwinner of the household throughout most of their 46-year marriage,

In 1831, William Lloyd Garrison began publishing his abolitionist newspaper, the Liberator. Maria supported Garrison and the Boston Female Anti-Slavery Society, and turned to anti-slavery writing, though it was highly controversial. “I am fully aware of the unpopularity of the task I have undertaken,” Maria wrote, “but though I expect ridicule and censure, it is not in my nature to fear them.”

Publication of An Appeal in Favor of that Class of Americans Called Africans in 1833 marked a turning point in Maria’s career. The public was far from ready to accept what were considered extreme views. Sales of her books fell off, publishers refused to accept anything she wrote, and she lost her editorial post with Juvenile Miscellany.

From 1841-43, Maria served as editor of the National Anti-Slavery Standard, the weekly New York newspaper of the American Anti-Slavery Society. “Such as I am, I am here,” she wrote in her first editorial, “ready to work according to my conscience and my ability; providing nothing but diligence and fidelity, refusing the shadow of a fetter on my free expression of opinion, from any man, or body of men and equally careful to respect the freedom of others, whether as individuals or societies.”

Two years later, problems within the movement caused Maria to resign her position at the newspaper. She distanced herself from the movement, but stayed on in New York and continued writing. New York State law allowed Maria to separate her income from David’s and to build up some savings.

The Childs returned to Massachusetts and settled in the Wayland home of Maria’s aging father, which would be her main residence for the rest of her life. There she completed her three-volume work, The Progress of Religious Ideas through Successive Ages, 1854.

When the Civil War began, she gathered supplies for the contrabands—slaves who fled for safety to Union lines—and compiled her Freedmen’s Book, a reading primer for former slaves. She also edited the autobiography of ex-slave Harriet Jacobs, and helped her publish it.

It will naturally excite surprise that a woman reared in slavery should be able to write so well. But circumstances will explain this. In the first place, nature endowed her with quick perceptions. Secondly, the mistress, with whom she lived till she was twelve years old, was a kind, considerate friend, who taught her to read and spell. Thirdly, she was placed in favorable circumstances after she came to the North; having frequent intercourse with intelligent persons, who felt a friendly interest in her welfare, and were disposed to give her opportunities for self-improvement.

After the Civil War, Maria was a founder of the Massachusetts Woman Suffrage Association, which supported women’s right to vote, though she believed black men should have the vote first. She also renewed her work on behalf of Native Americans, advocating the right of native peoples to retain their own language and religion.

David Child died in 1874. Free of David’s care and enjoying financial security for the first time in her life, Lydia gave generously to causes dear to her heart. In several later books, both fictional and political, she returned to issues of justice for Native Americans and African Americans. She also wrote the still popular Thanksgiving song, Over the River and Through the Woods.

When Lydia Maria Child died on October 20, 1880, her estate was valued at $36,000. Wendell Phillips, a prominent abolitionist, gave the eulogy in a service at her Wayland home. She was “ready to die for a principle and starve for an idea,” Phillips said.