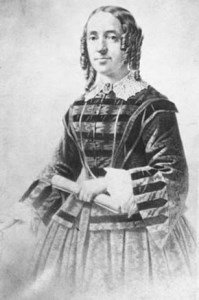 Ernestine Rose (1810–1892) was an advocate for the abolition of slavery and an orator whose activism was recognized by contemporaries as one of the major intellectual forces behind the women’s rights movement in nineteenth-century America. Although she met with discouragements, lack of acknowledgement of her achievements and hostility from women, she was described as “one of the best lecturers of her time.”

Early Years
She was born Ernestine Louise Potowski in Peterhof Trybunalski, Poland, on January 13, 1810. Her father was a wealthy rabbi and her mother the daughter of a wealthy businessman. She was reared in strict accordance with the tenets and rituals of the Jewish religion. At the age of five, Rose began to “question the justice of a God who would exact such hardships” as frequent and severe fasts.

As she grew older, she began to question her father more and more on religious matters. Her intellectual development brought her to find many things in the Bible which she could neither understand nor approve. By the age of fourteen, she had completely rejected the idea of female inferiority and the religious texts that supported that idea.

When Rose was sixteen her mother died and her father betrothed her to his young Jewish friend. By the terms of the betrothal, she would forfeit a good share of the property which reverted to her at her mother’s death if she broke the marriage contract.

Unwilling to accept the betrothal, she sued her father for her inheritance in the Polish courts. This meant a long and lonely journey in the dead of winter. The courts ruled in her favor, ruling that she could retain the full inheritance from her mother. She decided to let her father keep her fortune, but she was happily freed from the arranged marriage.

Rose returned home only to discover that in her absence her father had remarried, to a sixteen year old girl. The tension that developed forced her to leave home. By the time she was seventeen, she had established herself in Berlin, one of the foremost cultural centers of the day. There she lived alone, obeying the German restrictions placed on Jews as to their movements, the kinds of work they could do and how long they could stay.

To support herself, she invented and sold perfumed paper, remaining in Berlin for nearly two years. Then she traveled to Belgium, the Netherlands and France. In June 1829, she decided to go to England, but the ship in which she sailed was wrecked. She arrived in England safely, but all her possessions had been destroyed. She found work as a teacher in the languages of German and Hebrew and continued to sell her room fresheners.

In London she was introduced to Utopian socialist Robert Owen after hearing him speak. Then about sixty years of age, he was impressed by her intellect, and invited her to speak in the huge hall he had furnished for radical speakers. In spite of her limited knowledge of English, the audience was so impressed that from then on she appeared regularly.

Owen referred to her as “his daughter,” and their friendship lasted for years. She helped him to found the Association of All Classes of All Nations, a group that espoused human rights for all people of all nations, sexes, races and classes. The group accepted no formal religion; it was at this time that she made her full break with religion.

During her time there she also met William Ella Rose, an English jeweler and silversmith three years her junior and a fervent disciple of Robert Owen. They were soon married by a civil magistrate, and both made it plain that they considered marriage a civil contract rather than a religious one.

Women’s Rights Activist
In May 1836, the Roses emigrated to the United States and later became naturalized citizens. They settled in New York City, where they opened a small shop in their home the following year. William repaired jewelry, watches and ornaments; Ernestine made and sold perfumed toilet water.

Rose learned that a bill proposed to the New York legislature would grant married women the right to control their own property and earnings. Rose drew up a petition, gained supporters, and submitted the first petition on this topic to the legislature in 1838. She persevered during succeeding years and New York’s Married Women’s Property Act was passed in 1848.

Others who participated in the work for that bill included Elizabeth Cady Stanton, Lucretia Mott, Frances Wright and Susan B. Anthony. These same women were responsible for inaugurating the women’s rights movement in the United States, which led to the famous Seneca Falls Convention of 1848.

Rose declared herself an Atheist and joined a group of freethinkers who had organized a Society for Moral Philanthropists. This group sponsored public lectures and debates, which sometimes drew as many as 2,000 people, and Rose became one of the most popular lecturers. Her topics included the advocacy of abolition of slavery, women’s rights, equal opportunities for education and civil rights.

Rose was much in demand and began to travel for lectures, first in New York state, then in the Northeast and as far south as Kentucky and South Carolina. She worked also in association with William Lloyd Garrison and Frederick Douglass. Together they traveled endless miles, wrote and delivered speeches, debated, argued, pleaded and organized on behalf of their causes.

All of these lectures and debates were regularly reported in the Boston Investigator, to which Rose was a constant contributor. The Investigator was an avowed infidel and Atheistic publication, and Rose fearlessly attacked the clergy in it. She was independent, thoughtful, critical and inquiring.

In March 1854 she went with Susan B. Anthony on a speaking tour to Washington, DC. Later, in October, Rose was elected president of the National Women’s Rights Convention at Philadelphia, overcoming the objections that she was an Atheist. Anthony was her champion for this fight, declaring that every religion – or none – should have an equal right on the platform.

On May 5, 1856, Ernestine Rose and her husband set sail for England and Europe. She tried to visit her native Poland and was denied admission. After a six-month sojourn, they returned to the United States. She attempted, thereafter, because of her health, to stay away from the platform and from controversy.

But within six months she attended the National Women’s Rights Convention, where she made the closing address:

The wisest of all ages have acknowledged that the most important period in human education is in childhood. This most important part of education is left entirely in the hands of the mother… With an imperfect education… can she impart a spirit of independence in her sons?… The mother must possess these high and noble qualities, or she never can impart them to her offspring.

In 1860 New York State passed a law that granted women nearly everything for which they had petitioned. It recognized the right of a married woman to be sole owner of any property she had inherited prior to or during marriage; it gave women power to make investments, sign contracts, sue or be sued, and to have equal control over her children. In New York she could do almost anything – except vote.

Rose appeared in Albany, New York at the State Women’s Rights Convention in early February 1861, the last convention to be held until after of the Civil War. On May 14, 1863, she shared the podium with Elizabeth Cady Stanton, Susan B. Anthony, Lucy Stone and Antoinette Blackwell when the first Women’s National Loyal League met to call for equal rights for women, and to support the government in the Civil War, “in so far as it makes a war for freedom.”

Rose became an American citizen in 1869, and was in attendance at the Equal Rights Association meeting in which there was a schism and on May 15, 1869, she joined with Elizabeth Cady Stanton, Susan B. Anthony and Lucy Stone to form a new organization, the National Woman Suffrage Association, taking a position on the executive committee.

Ernestine Rose had remained in poor health for a number of years. On June 8, 1869, suffering from severe neuralgia and rheumatic pain, she retired to England. Her farewell party in America was arranged by Susan B. Anthony. Rose and her husband both received gifts, including a substantial sum of money collected from colleagues and admirers, since the couple was then in reduced circumstances.

By 1873 Rose’s health did improve and she began again to take part in the causes of freethought and Women’s Suffrage in England, attending a Conference of the Woman’s Suffrage movement in London, reported in the National Reformer. She was a speaker in Edinburgh, Scotland, on January 27, 1873, at a large public meeting in favor of Woman’s Suffrage and later spoke at the Universal Peace Society.

Ernestine Rose was described by her compatriots as beautiful, even in old age. She was of medium height, matronly form, thoroughly feminine, soft curls – iron gray in color – fair, pale cheeks, beautiful eyes, a slight lisp, and a foreign accent.

William Rose died in 1882, after which Ernestine seldom left her London flat.

Ernestine Rose died at Brighton, England, on August 4, 1892, at age eighty-two and was buried beside her husand.