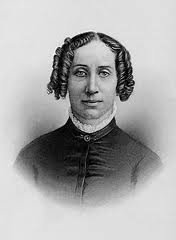 Clarina Nichols (1810–1885) was a journalist and newspaper editor who was involved in all three of the major reform movements of the mid-19th century: temperance, abolition and women’s rights. Because of her own experiences, Nichols was one of the first to grasp the importance of economic rights for women, of the need for wives to keep their property and wages away from their husbands’ control.

Clarina Irene Howard was born January 25, 1810, in West Townshend, Vermont, into a prosperous New England family. She was the oldest of eight children, and received an above average education for her day. Her father was the town’s ‘overseer of the poor.’ Clarina listened to his interviews with poor desperate women who had no legal recourse if their husbands were alcoholics or abusive. These experiences contributed to her lifelong passion for women’s rights.

In 1830, Clarina married Justin Carpenter, an aimless young man with a law degree and no particular ambitions, and they had three children. Their marriage lasted nine years, and was a constant source of misery. Clarina constantly strugged to support the family through her work as a teacher and a writer, and suffered both physical and emotional abuse from her husband. She left her husband after he kidnapped their children and had to be tracked down.

These experiences made Nichols aware of the ways in which American women were systematically disempowered. Stripped of all rights after marriage and presented with very limited employment opportunities, women faced significant obstacles to realizing their intellectual potential, obtaining economic independence and finding a voice in politics and reform.

To support herself and her children, in the early 1840s Clarina found employment as a reporter for a weekly newspaper, the Windham County Democrat, in Brattleboro, Vermont and discovered her talent for journalism. There she began to express her ideas about the need for radical social reform in American society.

Her articles and editorials spoke out in favor of the causes of temperance, abolition and women’s rights, transforming the Democrat into a staunchly pro-reform paper. She used her sharp wit and considerable literary skills to write powerful, persuasive pieces calling for women’s rights to their property, children and wages.

In 1843, Clarina obtained a divorce from her first husband, and married George Nichols, the editor and publisher of the Democrat, who was twenty-eight years her senior. They had one son. George Nichols became seriously ill soon after their marriage, and Clarina took over his duties, but made no announcement of the change in editorship. She wanted time, she said, to win “men’s confidence in my abilities to run a political paper.”

For the next ten years Clarina Nichols edited the Democrat, making the paper more literary and more closely aligned with a variety of reform causes. Through the newspaper, she became an early advocate of the emerging women’s rights movement, which developed because women were allowed little voice in the temperance and antislavery movements.

Clarina Nichols helped organize the first National Women’s Rights Conventions in 1850 and 1851 in Worcester, Massachusetts, and became one of the movement’s most popular speakers. Her speech, The Responsibilities of Woman, was widely circulated. In this speech, Nichols argued that women needed more rights in American society so that they could better carry out their responsibilities to their husbands, children and communities.

Educate your daughters for practical life, and you have endowed them better than if you had given them fortunes. When a young girl of fourteen, I said to my father, Give me education, instead of a “setting out” in the world, if you can give me but one. If I marry, and am poor in this world’s goods, I can educate my children myself. If my husband should be unfortunate, the sheriff can take his goods; but no creditor can attach the capital invested here [touching her forehead].

Throughout the 1850s, Nichols continued her career as an activist lecturer, traveling throughout the country giving speeches on behalf of temperance, women’s rights and the Republican Party. In October 1852, she helped organize the first of several petitions submitted to the Vermont legislature to give women the right to vote in school meetings.

When the Kansas-Nebraska Act of 1854 threatened to establish slavery in the western territories, Clarina Nichols uprooted her family and became a pioneer and activist in the Kansas Territory. She endured enormous hardships, but believed that the fight for a free Kansas was worth the sacrifice. She was one of the Republican Party’s earliest female stump speakers and spoke every night except Saturday to standing-room only crowds.

Nichols lobbied male Kansas legislators to give women basic legal rights. Her efforts helped her adopted state become a frontrunner in the issue of women’s rights, and gained her the respect and support of such women as Susan B. Anthony and Elizabeth Cady Stanton.

Nichols’ husband died in 1855, and she spent much of 1856 campaigning for support for Kansas and John C. Fremont, the Republican presidential nominee. In the spring of 1857, she moved her family to Wyandotte County, where she became associate editor of the Quindaro Chindowan, an antislavery newspaper which was published from May 13, 1857 through June 12, 1858.

Excerpt from a Clarina Nichols letter to the editor of the Wyandotte Gazette tells a tale of Nichols and the western branch of the Underground Railroad:

My cistern – every brick of it rebuilt in the chimney of my late Wyandotte home – played its part in the drama of freedom. One beautiful evening late in October ’61, as twilight was fading from the bluff, a hurrid message came to me from our neighbor – Fielding Johnson – “You must hide Caroline. Fourteen slave hunters are camped on the Park – her master among them.”

My cistern had been cleaned and nicely dried preparatory to a wash of cement for some undiscernable leakage. Its dimensions were 7 by 12 (square) and a rock bottom; eight feet in depth and reached from a trap in the floor of the wing; an open space between the floor and mouth – when left uncovered – affording ventilation from the outside.

Into this cistern Caroline was lowered with comforters, pillow and chair. A washtub over the trap with the usual appliances of a washroom standing around, completed the hiding. But poor Caroline trembling and almost paralyzed with fear of discovery her nerves weakened by grieving for her little girl transported to Texas, and the cruel blows which had broken her arm and scarred her body – could not be left alone through the night.

As I must have an excuse if found up at an unusual hour, I improvised a sick room. My son sleeping on the sitting-room lounge for a patient; my rocking chair; a stand with cups, vials and night lamp beside him were above suspicion. All night I crept to and fro in slippered feet. Peering from the skylight in the roof, from which in the bright moonlight all the approaches could be plainly seen anon; whispering words of cheer to Caroline in her cell, and back again to watch and wait and whisper.

At 12 o’clock – mid the cheerful crowing of cocks on both sides of the river – having taken a careful survey from the skylight, I passed a cup of fresh hot coffee to Caroline and sitting by the open floor drank my own with apparent cheerfulness, but really in a tremor of indignation and fear; fear of a prolonged incarceration of the poor victim of oppression and indignation at the government that protected and the manhood that stayed its hand from “breaking the bonds and telling the oppressed go free.”

Seven o’clock in the morning the slave-hunters rode out of town into the interior. When evening fell again Caroline and another girl of whom the hunters were in pursuit found a safe conveyance to Leavenworth friends.

Prior to the 1859 Wyandotte Constitutional Convention, Nichols traveled throughout the territory gathering signatures on petitions that called for equal legal and political rights for women under the new Kansas constitution. Although her gender barred her from addressing the all-male convention, Nichols attended all sessions and lobbied the participants at unofficial, after-hours sessions.

Largely due to Nichols’ efforts, the final version of the new Kansas Constitution included three provisions that she had fought fervently for: the right of women to vote in school elections, new educational opportunities for women, and increased rights to their property and equal standing on child custody matters in cases of divorce.

Active on behalf of the Union during the Civil War, after the war Nichols threw herself wholeheartedly into the campaign for women’s suffrage. When the Kansas campaign for women’s right to vote was launched in 1867, Susan B. Anthony, Lucy Stone, Elizabeth Cady Stanton and Olympia Brown joined Nichols in this valiant effort. Kansas voters rejected amendments for both female and African American suffrage.

The cause of women’s rights advanced slowly, thereafter, but it did advance, thanks to Nichols and many other selfless and dedicated women. Nichols moved to California in 1871 to live with two of her children. There she continued her work as a journalist and advocate for women’s rights and other humanitarian reforms.

At the end of her long and useful life, Nichols expressed regret that she had never found the time to write her autobiography. “What a book,” she lamented in her diary in 1880, “I might have given to my dear children, relatives, and personal friends.”

Clarina Nichols died on January 11, 1885. She was buried in Mendocino County, California.

Clarina Nichols was so well known in her day that she authored her own chapter in the landmark History of Woman Suffrage (1881), edited by Susan B. Anthony, Elizabeth Cady Stanton and Matilda Joslyn Gage. Two years after Nichols’ death, Kansas women won the right to vote in municipal elections, and in 1912 they succeeded in their efforts to gain equality at the polls.