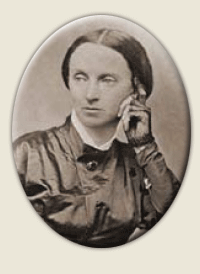 Jane Grey Swisshelm (1815–1884) was a journalist, publisher, abolitionist and women’s rights advocate. She was active as a writer in Pittsburgh, Pennsylvania and as a publisher and editor in St. Cloud, Minnesota, where she founded a string of newspapers and regularly wrote for them.

Jane Grey Cannon was born in Pittsburgh, Pennsylvania, on December 6, 1815, the daughter of a Scotch-Irish chair maker. When her father died in 1827, her mother Mary was left with three children to support. She put Jane to work painting on velvet and making lace. At the age of fourteen, Jane became a schoolteacher.

At age 21, Jane married farmer James Swisshelm, over her mother’s objections. Jane was strong-willed, and her marriage was difficult. Her husband was a bit of a tyrant, and she was embittered by what she perceived as wrongs committed against women by custom and law.

In 1838, the couple moved to Louisville, Kentucky. Already a woman with abolitionist sympathies, she came face to face with the realities of slavery. It made a strong impression on her.

Against her husband’s wishes, Jane returned to Pittsburgh in 1839 to care for her dying mother. Aware of the problems in her daughter’s marriage, Mary Cannon added a clause to her will to prevent James from having access to Jane’s inheritance. James was enraged, and threatened to file a claim against Mary’s estate for the loss of Jane’s domestic services during the time she cared for her mother.

But the clause in Mary’s will made no difference. At that time, the law dictated that married women could not own property. Ownership of the property Jane inherited from her mother reverted to her husband. Jane began supporting a bill that eventually changed that law – one of her most important achievements.

After her mother’s death, Jane managed a seminary in Butler, Pennsylvania for a while. She finally returned to James two years later at his farm, Swissvale, located east of Pittsburgh.

During the 1840s, Jane began to write poems, stories and essays for publication in local newspapers. The editors’ unwillingness to publish her writing and her desire to support social reforms prompted her to start a newspaper called the Pittsburgh Saturday Visitor in 1847. It eventually reached a national circulation of 6,000. Her articles were copied far and wide, and she quickly gained national fame.

She was a slight and fragile woman, but did not hesitate to express her beliefs. In her columns, she supported the abolition of slavery and the burgeoning women’s rights movement. She actively participated in local, state and national political affairs, even though women were not allowed to vote.

By 1850 Jane had gained such a reputation that Horace Greeley, the editor of the New York Tribune, gave her a job as a freelance reporter. She spent two months in Washington, DC, sending letters back to the Tribune describing and commenting on political life in the nation’s capital. She convinced Vice-President Millard Fillmore to open the reporters’ area in Congress for her, becoming the first woman to sit in the Senate press gallery.

However, she lost her job as a correspondent for Greeley when she published an unsubstantiated and inflammatory story about Daniel Webster in her newspaper the Visitor. She returned to Pittsburgh and resumed her editorial duties. She continued to write poems and stories, which she published between columns dedicated to social reform.

In 1852, Jane and James had a daughter, Mary Henrietta, affectionately called Zo. Determined to be a good mother, Jane gave up her responsibilities at the Visitor, but within a few short months, she was back in her office, tending her newspaper business.

In 1853, Jane decided to “say something about those rich old farmers who make their wives work out in the fields, and leave their babies in the fence corners for the snakes to eat.” She goes on to describe how the women, “after working in the fields until meal time, come home, cook, milk and churn, while the men rest.”

It is very well known that thousands, nay, millions of women in this country are condemned to the most menial drudgery, such as men would scorn to engage in, and that for one-fourth wages; that thousands of women toil at avocations which public opinion pretends to assign to men. They plough, harrow, reap, dig, make hay, rake, bind grain, thrash, chop wood, milk, churn, do any thing that is hard work, physical labor and who says any thing against it?

The efficient remedy for this class of evils is education; an equal education! If you wish to maintain your proper position in society, to command the respect of your friends now, and husbands and children in future, you should read, think, study, try to be wise… You should try to understand every thing you see and hear; to act and judge for yourselves; to remember you each have a soul of your own…

When you once get these ideas fixed, and learn to act upon them, no man or set of men, no laws, customs or combination of them can seriously oppress you… If women knew their rights and proper places, we would never hear of men ‘making their wives do this, that, or the other.’

By 1857, Jane Swisshelm had spent more than twenty years trying unsuccessfully to please her husband and combat her mother-in-law’s hostility. She divorced James, and she and Zo moved to St. Cloud, Minnesota, where she established the St. Cloud Visitor. She also lectured throughout the state on the issue of women’s rights.

In her editorials, she condemned Southerners who had settled in Minnesota and brought their slaves into free territory. After one particularly scathing editorial, her newspaper office was broken into, and her printing press was thrown into the nearby Mississippi River.

With the financial support of her friends, Swisshelm bought a new press and launched the St. Cloud Democrat, which became her most prominent newspaper because of her feminist sentiments. Women in the area began sending letters to her concerning the inequality of woman’s position in society, and she responded to them in the newspaper. As always, she advised them that education was the key, that only through enlightenment could woman discover her true worth.

As the Civil War raged, Swisshelm toured major U.S. cities. While in Washington, she met an old friend from Pittsburgh, Edwin Stanton, then Union Secretary of War. He gave her a job as one of the first female clerks in the quartermaster general’s office.

She spent her free time working as a nurse for the Union Army in the field hospitals surrounding the city. In May 1864, she cared for the soldiers wounded at the Battle of the Wilderness at the Old Theater Hospital in Fredericksburg. In her memoirs, she wrote of her experiences in Fredericksburg:

There was one hundred and eighty-two men in the building, all desperately wounded. They had been there a week. There were two leather water-buckets, two tin basins, and about every third man had saved his tin-cup or canteen; but no other vessel of any sort, size or description on the premises – no sink or cesspool or drain. The [male] nurses were not to be found; the men were growing restless and despairing, but seemed to catch hope as I began to thread my way among them and talk.

I spoke the first night to Dr. Porter about blankets and straw or hay for beds, but was assured that none were to be had. Supplies could not reach them since being cut off from their base, and the Provost Marshal, General Patrick, would not permit anything to be taken out of the houses, though many of them were unoccupied, and well supplied with bedding.

On Monday morning I sent for Dr. Porter, and stated the trouble about nurses shirking. He had them all summoned in the front end of the large room, and in presence of the patients, said to them:

“You see this lady? Well, you are to report to her for duty; and if she has any fault to find with you she will report you to the Provost-Marshal!” I have never seen a set of men look more thoroughly subdued. There were eleven of them, and they all gave me the military salute. The doctor went off, and I set them to work.

When there was so much to be done, I would do the most needful thing first, and this was ridding the wounds of worms and gangrene, supporting the strength of the men by proper food, and keeping the air as pure as possible.

I dressed wounds! dressed wounds, and made thorough work of it. In the church was a dispensary where I could get any washes or medicines I wished, and I do not think I left a worm. Some of them were over half an inch long, with black heads and many feet, but most were maggots. They were often deeply seated, but my syringe would drive them out, and twice a day I followed them up.

The black and green places [in the wounds] grew smaller and better colored with every dressing. The men grew stronger with plenty of beef and broth and canned milk. I forget how many thigh stumps I had, but I think as many as twelve.

In December 1865, Swisshelm started publishing another newspaper, The Reconstructionist, and began to cover President Andrew Johnson‘s Reconstruction policies. Because of her criticism of the president she lost her government job. She finally gave up her role as a newspaper editor in March 1866, when an arsonist tried to set fire to her pressroom and living quarters.

With no source of income and a daughter to support, Swisshelm returned to Pittsburgh. On the advice of her friend, Edwin Stanton, she sued her ex-husband for fraud and won her case in the Supreme Court of Pennsylvania in 1868. The court granted her possession of the homestead at Swissvale. After she had made improvements to the house, she and Zo moved in.

Swisshelm spent the last fifteen years of her life working as a freelance journalist and public speaker. Based at Swissvale and at a country cottage in Indiana County, Pennsylvania, she often visited her sister in St. Cloud, and wrote for the Chicago Tribune during much of that time. She also wrote her autobiography, Half a Century, which was published in 1880.

Swisshelm was so well known as a journalist and a reformer that when she died, editors and their readers chronicled her life, extolled her virtues, lamented her death, and did what they could to preserve her memory.

The Pittsburgh neighborhood of Swisshelm Park is named in her honor.