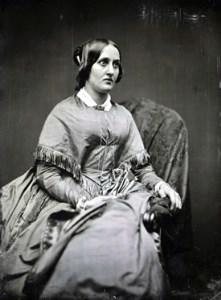 Greenwood’s accomplishments include a number of firsts:

Early Years
Sara Jane Clarke was born September 23, 1823 at Pompey, New York to Deborah Baker Clarke and Dr. Thaddeus C. Clarke. In 1842 the Clarkes moved from New York to New Brighton, Pennsylvania, where her father practiced medicine until his death in 1854. There Sara attended the Greenwood Institute, from which she may have taken her pseudonym.

Literary Career
Sara began writing poetry and children’s stories as a young girl, and her first works were published in Rochester newspapers. Soon after Nathaniel Willis began to solicit her work for his periodicals New Mirror and Home Journal.

In 1844, at the age of 21, Sara began writing for some of the best newspapers and magazines of the time, including Godey’s Lady’s Book and the Saturday Evening Post. She contributed poetry, fiction and political commentary. She drew national attention with a poem published in the New Mirror magazine.

Like many other nineteenth-century women writers, including Fanny Fern (Sara Willis Parton), Sara Jane Clarke adopted a pseudonym, becoming Grace Greenwood, both in print and in her personal life. She wrote under both her given name and her pseudonym. In an 1846 issue of the Home Journal, The Wife’s Appeal, a poem by Sara J. Clarke, is published just above Tit-for-Tat, a story by Grace Greenwood.

When William Lloyd Garrison and Frederick Douglass lectured at New Brighton in August of 1847, they visited the Clarkes. Garrison wrote to his wife, Helen Benson Garrison, about this young poetess who long before the time of his visit had become interested in the anti-slavery movement. He considered her to be both handsome and interesting. Garrison and Douglass spent an hour with the family.

By October 1849, Greenwood was an assistant editor for Godey’s Lady’s Book. Godey fired her in 1850 after Southern subscribers objected to her letters published in the National Era, a Washington anti-slavery weekly. To avoid alienating readers, Godey avoided controversial political and religious issues. By 1850 she also supported of the women’s rights movement, and she lectured on various topics including prison reform.

After leaving Godey’s Greenwood moved to Washington, DC, where she worked for the National Era and the Philadelphia-based Saturday Evening Post. She initiated a series of “Washington Letters” in the latter paper which appeared regularly for the next fifty years.

At the National Era, she wrote columns, travel letters and articles, as well as copy editing the serialized original version of Harriet Beecher Stowe‘s Uncle Tom’s Cabin. Before Stowe’s abolitionist novel was published in book form, it appeared as a 40-week serial in the National Era, beginning with the June 5, 1851 issue.

Greenwood also began publishing her writings in book form: Greenwood Leaves, a collection of her magazine pieces (1850); and her first book for children, History of My Pets (1854). Her published collection Poems (1851) included passionate poetry and references to her intimate friendship with Anna Phillips, indicating an acceptance of intimate same sex friendships.

In 1852 she was sent to Europe on an assignment for the New York Times, providing reports for that paper over a fifteen month period. She was the first woman correspondent on the Times payroll. The articles written during this time were collected in a book entitled Haps and Mishaps of a Tour in Europe (1854), a work that remained in publication for the next four decades.

Grace Greenwood became a popular poet and essayist of the mid-nineteenth century and received significant attention. She became a prominent member of the literary society of New York along with Anne Lynch Botta, Edgar Allan Poe, Margaret Fuller, Ralph Waldo Emerson and Julia Ward Howe, among others. Though critics assessed her work as overly sentimental, she was very successful.

Marriage and Family
At the age of 30, Clarke moved to Philadelphia, and on October 17, 1853 she married Leander Lippincott. They had a daughter, Annie Grace, born October 3, 1855. However, there was one aspect of marriage she did not appreciate; her works were now copyrighted under the name of her husband.

In the same year as their wedding, Greenwood and her husband became the creators of The Little Pilgrim, heralded as the first magazine for children in the United States. Abby Kelley, when she was working in Indiana in late February 1854, sent her six-year-old daughter Alla a subscription to the magazine. John Greenleaf Whittier’s poem, “The Barefoot Boy,” was first published in this magazine, which had a successful run until after the Civil War.

Criticism from Nathaniel Hawthorne
As one of the most successful woman writers of the 1850s, Greenwood became the target of some harsh criticism, expressed most famously by novelist Nathaniel Hawthorne, who in January 1854 wrote to his publisher William Ticknor that:

I am getting sick of Grace. Her Little Pilgrim is a humbug, and she herself is… I wish her well, and mean to write an article for her, by and by. But ink-stained women are, without a single exception, detestable.

America is now wholly given over to a damned mob of scribbling women, and I should have no chance of success while the public taste is occupied with their trash – and should be ashamed of myself if I did succeed.

Despite his criticism, Greenwood seems to have gotten along well with Hawthorne’s family. She dedicated her children’s book Recollections of My Childhood, and Other Stories to his children, Julian and Una Hawthorne.

In the 1850s and 1860s, more and more magazines were publishing stories by women writers to appeal to the growing audience of American middle-class female readers. Some of these were the best known writers of their day, including Harriet Beecher Stowe, Louisa May Alcott, Sarah Josepha Hale, Rebecca Harding Davis and Margaret Fuller.

Social Reform
Greenwood became prominent in the emerging women’s movement, writing and lecturing in favor of women’s suffrage, abolition and equal pay for women. Greenwood lectured extensively before and during the Civil War for the abolitionist cause, prison and asylum reform, and against capital punishment. She was also an advocate of fair pay for writers.

During the Civil War she supported the North by helping to raise money for the U.S. Sanitary Commission and lecturing on patriotic themes. She was writing for the New York Times and the Ladies’ Home Journal. Her reports so helped the Union cause that President Abraham Lincoln called her the little patriot. Her writings from this period were republished in Records of Five Years (1867).

After the war, women’s rights became Greenwood’s focus. Her articles and speeches focused mainly on women’s issues, such as advocating for Fanny Kemble‘s right to wear trousers, Susan B. Anthony‘s right to vote, and the right of all women to receive equal pay for equal work.

Greenwood returned to Washington, where she worked as a correspondent for the New York Tribune and the New York Times. In the early 1870s, she traveled out West. Many of her articles were travel pieces commenting on the wonders and uncertainties of the American West. Her articles for both publications were released as New Life in New Lands in 1872.

On July 27, 1872, the New York Times published Greenwood’s “Eight Days in the Yosemite.” This is from her account of the wonders of the Yosemite Valley:

The Bridal Vail [Bridalveil Falls] is my favorite Yosemite cataract. There is for me a tender, retrospective charm to the name. Just opposite to the Bridal Vail is the lovely little trickling cascade, called the Virgin’s Tears. Had the sight of the floating, flouting Vail anything to do with that lachrymose condition? We, who reached the Vail, lingered about it for hours – read and slept, botanized and shouted poetry in each other’s ears. When the rainbows came, we went far up into the very heart of the splendor. We could have jumped through the radiant hoops like circus-performers…

The Greenwood/Lippincott marriage had been unhappy for years, as his infidelities became fodder for gossip columnists. In 1876 Lippincott was dismissed from his government position and indicted for fraud in connection with Indian land claims. He fled the United States to avoid a trial for misappropriating government funds, abandoning his wife and child.

Grace Greenwood became a highly respected journalist. After returning from another two-year European trip in 1877, she was one of the few women granted permission to sit in the Congressional press gallery as a political correspondent – the first was Pittsburgh’s Jane Grey Swisshelm in 1850. In 1880 the gallery was closed to women and remained so for nearly forty years.

Late Years
Greenwood continued writing and lecturing to support her family. She and her daughter moved to Europe around 1882 and remained there for several years. She worked for the London Journal, and also wrote a biography, Queen Victoria: Her Girlhood and Womanhood (1883).

In 1887 she returned to the United States and once again settled in Washington, DC, where she wrote for the New York Independent and submitted stories to several publications, including the Ladies’ Home Journal. She continued to work until 1900, when she moved to New Rochelle, New York to live with her daughter in 1900, and spent the last years of her life there.

Grace Greenwood died of bronchitis April 20, 1904, at age 80. Her obituary was on the front page of the New York Times, proving her importance as a literary figure in the nineteenth century. She is buried in the Civil War section of Grove Cemetery in New Brighton, Pennsylvania.