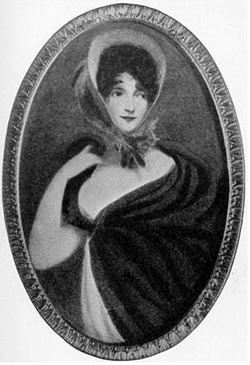 Yet, by the late 20th century her name and place in American history began to emerge.  Today she is considered the first female American botanist, or as Asa Gray himself said in 1843, the “first botanist of her sex in her country”.

Jane may never have become a botanist without the urging of her father, Cadwallader Colden, himself a physician and practicing botanist. Originally from Scotland, Cadwallader married Alice Chryste in 1715. They moved to the USA and had a farm in Newburgh-on-Hudson, New York when Jane was born in 1724. Cadwallader had by then built a successful political career and was the surveyor general of New York.

Newburgh-on-Hudson was a remote area in the 1700’s. The American outdoors was still wild and life for the early colonist out of doors was not entirely safe.  Jane and her siblings (10 in all) were given a basic education at home by her mother, while her father provided Jane with knowledge in science, particularly, botany. She was taught the Linnaeus system by her father who translated it from Latin to English in order to make it easier for her to understand.

Jane embarked on her own study of the flora around the Newburgh-on-Hudson area. She took impressions of leaves on paper with printer’s ink to distinguish the various species. Jane eventually compiled a collection of some 300-odd impressions with written descriptions of the surrounding native flora. The descriptions showed that Jane was interested in the plants common names and possible medicinal benefits. It is noted by the writer James Britton that she “went among the country folk and noted their names and rustic remedies. Thus of Pedicularis tuberosa (No.41) she says;

“The Pedicularis is called by the country people Betony: they make Thee of the Leaves, and use it for the Fever and Ague.”

Obviously, she is a woman following in her father’s footsteps.

Jane benefitted from her father’s contacts and is known to have corresponded with many leading botanists of the time. Their impressions of the young woman seem to have been quite positive. Collinson wrote to Linnaeus in 1756 saying she “is perhaps the first lady that has so perfectly studied your system. She ought to be celebrated.” Another correspondent, John Bartram replies to Jane “I read it several times with agreeable satisfaction; indeed, I am very careful of it, and it keeps company with the choicest correspondence.” Jane was in contact with Alexander Garden regarding the plant Hypericum virginicum, a plant she first discovered and named Gardenia in his honour.  It is somewhat ironic that Jane Colden never had a plant named in her honour.

Jane’s botanical research seems to have ended with her marriage to William Farquar. She died sometime after giving birth to a baby that also died. The date of her death is in dispute, and is either March 10, 1760 or 1766

Her collection, however, still had a life of its own. It appears it remained in her father’s possession until his death in 1776. Then during the American Revolution the collection somehow ended up in the hands of a German officer, F. von Wangenheim. Sometime later it became the property of Godfrey Baldinger and then most remarkably became the possession of Joseph Banks, the British botanist of great renown. Banks bequeathed the collection to the British Natural History Museum on his death and that is where it is today.

According to the British Museum the bound manuscript is titled Flora Nov-Eboracensis:: Plantas in solo natali collegit, descripsit, delineavit, Coldenia C. Coldens filia &c. Only one of Jane’s nature prints has survived. The rest is comprised of 340 line drawings that have a light wash.

Jane Colden lived to receive some accolades from her peers, male peers, which I feel is worthy of note especially in consideration of her time. She is the only woman botanist whose work was included in Linnaeus’s botanical Species Plantarum.

In 1963, the Garden Club of Orange and Dutchess Counties published fifty-seven of Jane’s descriptions of species native to North America in commemoration of the fiftieth anniversary of the founding of the Garden Club of America. More recently, The Jane Colden Native Plant Sanctuary was named in her honor at the Knox’s Headquarters State Historic Site in Vails Gate, New York.