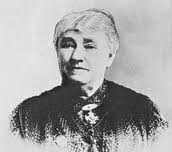 Jane McDowell Foster inspired the song Jeanie with the Light Brown Hair, but her marriage to composer Stephen Foster proved to be less than romantic. Disillusioned and conflicted by the outbreak of the Civil War, Foster spent his last years in New York City, living on the Bowery and writing songs for cash.

Jane McDowell was born in 1829, the daughter of Dr. Andrew N. McDowell, a leading Pittsburgh physician. She was an attractive young woman with auburn hair. Stephen Collins Foster was born to William Barclay Foster and Eliza Clayland Foster in Lawrenceville, Pennsylvania, on July 4th, 1826 – the 50th anniversary of the signing of the Declaration of Independence.

After a whirlwind courtship, Jane McDowell married fledgling composer Stephen Foster on July 22, 1850. He was 24; she was 20. Jane gave birth to their only child, a daughter they named Marion, almost nine months to the day after their wedding. While this probably brought some joy to the marriage, it was probable that Jane by then was deeply unhappy.

Except for their time in New York, the couple always lived with Foster’s family in Allegheny, Pennsylvania, a suburb of Pittsburgh, which could have been the source of some of their problems. Jane likely played second fiddle to Stephen’s mother Eliza and his siblings, to whom Stephen remained exceedingly close.

Foster wrote most of his well known songs between 1850 and 1860, many of which were written for minstrel shows, and some of his best tunes were the product of their first years of marriage. Jane was the inspiration for “Jeanie with the Light Brown Hair”, one of his most popular songs.

In 1851, Stephen and Jane moved to New York City at the request of his music publishers. Determined to be a professional, Foster rented an office. He won the admiration of prominent people in the music business, but his musical productivity grew steadily less. Since his songs were not protected by copyright, he realized very little income from them.

Foster’s composing style required long periods of solitude. Friendly and amiable when he was not working, he became a different man when he worked – serious and emotionally detached. He required weeks to write a good song – he spent the enitre summer of 1852 writing “My Old Kentucky Home.”

Foster was also the first American to try to make a living solely as a songwriter, but despite the popularity of his music, his family lived in poverty. Since there was no copyright protection at that time, he realized little income from his compositions. In 1853, because of Foster’s inability to work and his alcoholism, Jane left him.

Jane and Marion moved to Lewistown, Pennsylvania, where her mother and sister lived. Determined to support herself and Marion, Jane took a job as a telegraph operator with the Pennsylvania Railroad, which had recently begun to hire women.

Jane worked at night, and Foster sometimes caused problems at her place of employment. When she locked the door to keep him out, he sat on the porch and played his violin until her shift was over. Liquor increasingly dominated Foster’s life, and many of his biggest hits had already been published.

Foster returned to New York City, which had become the epicenter of American music publishing. Although Jane remained physically separated from Stephen, the emotional bonds remained. She kept in contact with her husband, and frequently visited him in New York, trying to help him stay afloat.

Within a year, Jane joined Foster in New York. After living briefly in a boarding house, in 1854 they moved into a house in Hoboken, New Jersey, where they lived until the fall, then returned to Allegheny. For a while, the Fosters seemed happy – Foster’s parents had died and his siblings had moved out, leaving Jane the matron of the home for the first time.

But they moved again in the spring of 1860. This time to Warren, Ohio, where Foster’s sister lived. They stayed there until the fall, then returned to New York. Liquor increasingly dominated Foster’s life, and most of his biggest hits had already been published.

When the Civil War began nobody was interested in Foster’s romantic ballads. The spirit of the time required new songs. He wrote “That’s What’s the Matter” after the slaughter at the Battle of Shiloh, not from personal convictions, but for his own economic need. The songs “Willie Has Gone to the War” and “When This Dreadful War Is Ended” were written in cooperation with George Cooper.

Stephen Foster died on January 13, 1864, at Bellevue Hospital, at the age of thirty-seven. In his worn leather wallet was a scrap of paper that simply said “Dear friends and gentle hearts” along with 35 cents in Civil War scrip and three pennies. Jane traveled to New York to claim the body. After the funeral, she returned to her telegraph work.

Jane McDowell Foster died of burn injuries in 1903, after her clothing caught fire as she sat near the hearth in her home in Allegheny.

One of Stephen Foster’s most beloved works, “Beautiful Dreamer,” was published shortly after his death. He composed 285 songs, hymns, arrangements and instrumental works, and wrote the lyrics for most of them as well. His compositions are characterized by moving melodies and simple harmonies that became America’s music.