Champion for Women’s Right to Vote 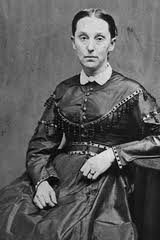 Abigail Scott Duniway (1834–1915) was a true pioneer who rose from simple beginnings as an Illinois farm girl to become a nationally known champion of women’s suffrage in the Pacific Northwest, as well as a significant author, and editor and publisher of a pro-women’s rights newspaper.

Well-read, well-informed, and interested in public issues, Duniway was particularly concerned about women’s economic plight. She fought for a woman’s right to own property in her own name and to secure that property from her husband and his creditors. She objected to the moral double standard, early marriages of young girls, and debilitating ‘excessive maternity.’

Early Years
Abigail Jane Scott was born in a log cabin on October 22, 1834, on the frontier of Groveland Township, Tazewell County, in central Illinois, a few miles from Fort Peoria. She was the third of nine children born to Ann Roelofson Scott and John Tucker Scott. She grew up on the family farm and attended a local school intermittently.

In 1852, when Abigail was 17, the Scott family joined the largest migration to Oregon in American history, leaving Groveland on April 2. The eleven members of the Scott party traveled in five ox-driven wagons. Abigail’s mother and youngest brother died along the way, and they lost nearly half of their forty-five cattle and two horses during their six-month journey on the Oregon Trail.

It was a formative experience for Abigail. She kept a journal of the migration and filled it with expressions of joy and wonder at the magnificent landscapes they traversed, as well as with heartfelt sorrow. Duniway’s experiences along the Oregon Trail surfaced time and again in her writing, first in a fictionalized account of the trip, and later in many serialized novels which recount tales of strong pioneer women.

The Scott family arrived in French Prairie in Oregon’s Willamette Valley in October 1852, joining relatives who had preceded them. The Scott family settled near Lafayette, in Yamhill County, Oregon shortly thereafter. In the spring of 1853, Abigail opened a school in Cincinnati (now Eola), near Salem.

For nine years Abigail endured the hardships and toil of a farmer’s wife, including five in the ‘Hardscrabble’ region. In 1858, she and her husband bought a farm in Yamhill County, which Abigail dubbed Sunny Hillside.

During this time Abigail Duniway authored Captain Gray’s Company, or Crossing the Plains and Living in Oregon (1859), the first novel to be commercially published in Oregon. This and others she wrote drew repeatedly on her experiences as a young woman on the Oregon Trail.

In the autumn of 1862, in what her biographer calls “the turning point in the Duniway marriage,” the Duniway farm was sold to cover debts after Benjamin endorsed notes signed by a friend who defaulted. The Duniways moved into a small house in Lafayette, where Abigail opened a boarding school and Benjamin took a job as a teamster.

Soon thereafter, Benjamin was permanently disabled when he was run over by a team of horses pulling a heavy wagon, leaving Abigail to support the family. She found that, as a woman, employment opportunities were severely limited. At first, she opened and ran a small boarding school in Lafayette.

In 1865, Abigail sold her school and moved the family to Albany, Oregon, where she taught in a private school for a year. However, the teaching profession paid women only a fraction of what it paid men. She then opened a millinery and notions shop, and built a successful business which she ran five years.

Angered by stories of injustice and mistreatment of women relayed to her by married patrons of her shop, in 1870 Abigail sold her shop and moved the family to Portland, where her husband got a job with the U.S. Customs Service. There she began to campaign for women’s rights in earnest.

Career as a Feminist Author
At the time Abigail began her career, women’s civil disabilities extended far beyond the mere lack of the vote. Married women had no legal existence apart from their husbands. They could not sign contracts, had no title to their own earnings, no right to property, nor any claim to their children in case of separation or divorce.

In Portland in 1871 Abigail Duniway founded The New Northwest, a weekly newspaper devoted to women’s rights, including suffrage: the right to vote and run for office. This weekly newspaper also discussed marriage, divorce, and the general social and economic conditions of frontier women. According to Duniway’s biographer Dorothy Morrison, the paper “supported women’s rights without making them a bore.”

Duniway published the first issue of The New Northwest on May 5, 1871, and within a few years the paper was financially self-sustaining. The boys (Willis, Hubert, Wilkie, Clyde and Ralph) all worked closely with their mother in the publishing business as they grew to maturity – first learning to set type, later writing copy as well. With their help, Duniway continued to edit and publish the paper until 1887.

In 1871 Duniway became acquainted with prominent women’s rights leader Susan B. Anthony. The Revolution, a reform newspaper edited by Anthony and Elizabeth Cady Stanton, had influenced Duniway to start her own paper. But far more important was the three-month campaign Anthony waged with Duniway in the Pacific Northwest.

Duniway cut her teeth on the lecture circuit during Anthony’s thousand-mile speaking tour of Oregon and Washington in 1871, for which Duniway was business manager and delivered speeches of introduction. She also learned the ins and outs of politics from the veteran suffragist. The pair organized the Washington Woman Suffrage Association while canvassing in Olympia.

Thereafter Duniway’s most treasured goal was to achieve the right to vote for women in the three states she designated as her ‘chosen bailiwick’ – Oregon, Washington and Idaho, the states that had comprised the old Oregon Country. She divided the first twelve years between Oregon and Washington, delivering about 70 speeches in each place every year from 1871 to 1884. In 1883 the Washington legislature passed a measure, drafted by Abigail Duniway, that granted the vote to women.

In 1886, Duniway reported walking five miles every day of the year (except Sunday) to collect subscriptions, writing one hundred pages of manuscript each week, and delivering three to four public lectures per week. She gave speeches throughout northern California and other states (including Illinois, Iowa, Wyoming, Utah, Michigan, Minnesota and Ohio) on her way to and from national suffrage conventions, and participated in temperance organizations and women’s clubs.

The January 21, 1886 issue of The New Northwest contained an account of Abigail Duniway’s vigil over the deathbed of her daughter, Clara, who passed away at the age of 31 from tuberculosis, the “plague of the 19th century.” Because all of Duniway’s other five children were sons, she felt the loss of her eldest child and her only daughter most keenly.

In 1887 that Duniway sold The New Northwest and went to Idaho where sons Willis and Wilkie had purchased a ranch in the Lost River Valley in south central Idaho and where her husband was raising horses and cattle. Benjamin’s health was getting steadily worse and they thought that fresh air and country life might help.

Abigail Scott Duniway became the chief advocate for women’s rights and suffrage in the state of Idaho for nearly twenty years; her work there, she estimated, involved 140 public lectures and 12,000 miles of travel from 1876 to 1895. As a result of her hard work and that of countless other suffragists, women ‘got the vote’ in Idaho in 1896.

Duniway then returned to Oregon, and revived the suffrage association there. She took a job as editor of The Pacific Empire, a magazine sponsored by suffragists. She did not have to sell subscriptions or advertisements; she could instead devote all of her time to writing and trying to further her cause.

Benjamin moved back to the Portland house, his health declining seriously. She had to give up the magazine when his care demanded more of her time. Benjamin Duniway passed away in 1896. A saddened Abigail wrote that not only had he been a devoted husband and father but he had always supported the work for equal suffrage and her part in it.

Throughout this period, Duniway suffered personal setbacks such as poor health, money problems and staunch opposition from some of the most influential men in Oregon. She persisted despite the consistent failure of women’s suffrage referendums on state ballots, and divisions with Eastern suffrage organizations. She actively supported the Married Women’s Property Act which gave Oregon women the right to own and control their own property.

Late Years
Duniway’s relentless work for the cause of women’s rights gave her near legendary status. When the Lewis and Clark Centennial was celebrated in Portland in 1905, it featured an ‘Abigail Scott Duniway Day,’ and contemporaries honored her as the quintessential ‘pioneer mother,’ as well as the ‘Mother of Woman Suffrage.’

Duniway and countless others waged five unsuccessful campaigns for women’s right to vote in Oregon (1884, 1900, 1906, 1908 and 1910). Duniway maintained that the close election in 1900 failed because her brother Harvey Scott, longtime editor of the Oregonian, opposed her efforts. This resulted in a bitter public feud between the two siblings.

During the 1912 Oregon campaign, Duniway’s health was failing. She was confined to a wheelchair, and unable to participate much in the work. When the suffrage amendment finally passed in 1912, Governor Oswald West asked Duniway, who was then 78, to write and sign the Equal Suffrage Proclamation in recognition of her long role in the struggle.

In 1905, Duniway had published her last novel about the Oregon Trail, From the West to the West, with the main character moving from Illinois to Oregon. Her last publication was Path Breaking: An Autobiographical History of the Equal Suffrage Movement in Pacific Coast States in 1914.

Abigail Scott Duniway died on October 11, 1915 at age 80, and was buried at River View Cemetery in Portland.

Duniway devoted more than four decades of her life to the cause of equal rights for women. With little education, and with responsibility for an invalid husband and six children, Duniway became a social reformer, businesswoman, author, journalist and the first female newspaper publisher in Oregon. Above all, she fought for that one right upon which she believed all improvements of women’s lot in life depended: the right to vote.