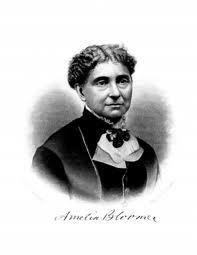 At age 22, Amelia married attorney Dexter Bloomer of Seneca Falls, New York, where she resided with her husband for the next thirteen years. He was a Quaker with progressive views and encouraged Amelia to write for his newspaper, the Seneca Falls County Courier.

Career in Social Reform
Over the next few years Amelia Bloomer wrote articles in favor of temperance and women’s rights, which led her to join several temperance organizations in the area. In 1848, Bloomer attended the first Women’s Rights Convention at Seneca Falls, which was organized by another Seneca Falls resident, women’s rights activist Elizabeth Cady Stanton.

In January, 1849, encouraged by women’s rights leaders such as Stanton and Susan B. Anthony, Amelia Bloomer published the first edition of her own newspaper, The Lily – devoted entirely to women’s issues, including suffrage, temperance and higher education for women. Bloomer felt that as women lecturers were considered unseemly, writing was the best way for women to work for reform. Originally, the paper was to be for “home distribution” among members of the Seneca Falls Ladies Temperance Society, which had formed in 1848.

Although women’s exclusion from membership in temperance societies and other reform activities was the main force that moved the Ladies Temperance Society to publish The Lily, it was not at first a radical paper. Its editorial stance conformed to the emerging stereotype of women as “defenders of the home.” The Lily was a great success and quickly built a circulation of over 4,000.

The paper encountered several obstacles early on, and the Society’s enthusiasm died out. Bloomer felt a commitment to the paper and assumed full responsibility for editing and publishing the paper. Originally, the title page had the legend Published by a committee of ladies. But after 1850, only Bloomer’s name appeared on the masthead, and she served as editor and publisher, publishing her views on social issues.

Gradually, the bi-weekly publication began to include articles about other subjects of interest to women. Many were from the pen of Elizabeth Cady Stanton, writing under the pseudonym sunflower. The earliest of Stanton’s articles dealt with the temperance, child-bearing and education, but she soon turned to the issue of women’s rights. She wrote about laws unfair to women and demanded change.

Bloomer was greatly influenced by Stanton and gradually became a convert to the cause of women’s rights. Recalling the case of an elderly friend who was forced to leaver her home after her husband died without a will, Bloomer wrote:

Later, other similar cases coming to my knowledge made me familiar with cruelty of the laws towards women; and when the women’s rights convention put forth its Declaration of Sentiments, I was ready to join with that party in demanding for women such change in laws as would give her a right to her earnings and her children, a right to wider fields of employment and a better education, and also a right to protect her interest at the ballot box.

In 1851 Amelia Bloomer first appeared on the platform as a public speaker, and in the winter of that year she addressed large and attentive audiences in all large cities of the state. Bloomer continued to speak frequently on the issues so near her heart, visiting and speaking in Cleveland, Cincinnati, Chicago, Milwaukee and St. Louis; and wherever she went she always was favored with full houses.

Dress Reform
Female fashion in the 1850s consisted of unhealthy tightly laced corsets, layers of petticoats that could weigh over 10 pounds and floor-length dresses, which often led to severe health problems. Bloomer began to advocate the wearing of clothes that had first been worn by Frances Wright and the women living in the experimental commune at New Harmony, Indiana in the 1820s. The costume was also worn in public by actress Fanny Kemble.

The new outfit, which was quickly dubbed Bloomers, was made of a loose bodice and a knee length dress worn over full pantaloons. Although Bloomer refused to take credit for inventing the pants and tunic, her name became associated with it because she wrote articles about the unusual dress, printed illustrations in The Lily and wore the costume herself.

As soon as it became known that I was wearing the new dress, letters came pouring in upon me by the hundreds from women all over the country making inquiries about the dress and asking for patterns – showing how ready and anxious women were to throw off the burden of long, heavy skirts.

This ensemble covered all but the wearer’s head, hands and feet, yet was considered scandolous and ridiculed. Due to the negative attention the clothing attracted, Bloomer and other notable suffragists abandoned wearing it because the ridicule it frequently undermined attempts to convince people of the need for social reform.

At the end of 1853, the Bloomers moved to Mount Vernon, Ohio, where Amelia continued to publish The Lily, which by then had a national circulation of over 6000. She also acted as associate editor of her husband’s newspaper, Western Home Visitor. Of course, her views were far more progressive than those of most Ohio settlers. The ideas she expressed in that paper were met not only with skepticism, but outright criticism of her, her womanhood, and even her husband for “allowing” her to write such things.

The following is an excerpt from one of her articles in the Western Home Visitor:

To woman equally with man has been given the right to labor, the right to employment for both mind and body; and such employment is as necessary to her health and happiness, to her mental and physical development, as to his. We see no reason why it should be considered disreputable for a woman to be usefully employed, while it is so highly respectable for her brother; why it is so much more commendable for her to be a drone, dependent on the labors of others, than for her to make for herself a name and fortune by her own energy and enterprise.

A great wrong is committed by parents toward their daughters in this respect. While their sons as they come to manhood are given some kind of occupation that will afford not only healthy exercise of the body and mind but also the means of an honorable independence, the daughters are kept at home in inactivity and indolence, with no higher object in life than to dress, dance, read novels, gossip, flirt and ‘set their caps’ for husbands.

In 1854 Dexter Bloomer decided to sell his paper and move westward, eventually settling in Council Bluffs, Iowa. In spite of her support for equal rights for women, Amelia Bloomer followed the wishes of her husband and sold The Lily to move with him. To the modern observer, her ability to reconcile her role as women’s rights advocate and her role as a dutiful wife, seems contradictory. Bloomer, however, considered her leaving The Lily an act of love, and not obedience.

In her farewell, she wrote:

But The Lily, being as we conceive of secondary importance, must not stand in the way of what we believe our interest. Home and husband being dearer to us than all beside, we cannot hesitate to sacrifice all for them.”

Bloomer continued to help her husband with his work and still gave lectures and wrote for other papers on women’s rights, temperance and other prominent questions before the public. She was the first president of the Iowa Woman Suffrage Society, and her residence was always open to the advocates of her favorite ideas, as they stopped or passed through the city.

Bloomer remained a suffrage pioneer and writer throughout her life, writing for a wide array of periodicals. She led suffrage campaigns in Nebraska and Iowa, and served as president of the Iowa Woman Suffrage Association from 1871 until 1873. There she supported a legal code that ended the distinction between male and female property rights.

Late Years
From Iowa, Bloomer exercised her First Amendment right to petition the government for a redress of grievances. In 1878, she wrote to the 45th Congress petitioning for the “removal of her political disabilities.” Her words in her Petition from Mrs. Amelia Bloomer of Council Bluffs, Iowa Regarding Suffrage in the West echo the sentiments expressed in the 1848 Seneca Falls Declaration:

The history of mankind is a history of repeated injuries and usurpations on the part of man toward woman, having in direct object the establishment of an absolute tyranny over her.

Advancing years began to limit her activities, and she was compelled to leave others to carry on the battle for equal justice for her sex. In the spring of 1890 Dexter and Amelia Bloomer celebrated their golden wedding anniversary in the house in which they had resided for thirty-five years.

But she was not ready to put down her pen just yet. In her essay “Woman’s Right to the Ballot,” Bloomer wrote:

I hold that these rights belong, not to man alone, but to the race, and to each individual member of it, without regard to sex. I hold that woman has as good and rightful a claim to them as her brother, and that the man who denies this claim is not only no good democrat, and much less a good republican, but that in being guilty of this denial he commits an act of the grossest injustice and oppression.

And I insist, not only that woman is entitled to the enjoyment of all these rights which God and nature have bestowed upon the race, but that she is entitled to the same means of enforcing those rights as man; and that therefore she should be heard in the formation of Constitutions, in the making of the laws, and in the selection of those by whom the laws are administered.

Dexter Bloomer published Life and Writings of Amelia Bloomer shortly after her death.

The main theme and the work of Amelia Bloomer’s life was the enfranchisement of women: in employment, educational privileges and political rights. Although her work was far less renowned than some of her contemporaries, her contributions influenced gender roles in the 19th century as America debated social reforms and constitutional rights. Her home at Seneca Falls, New York, known as the Amelia Bloomer, was listed on the National Register of Histori Places in 1980.