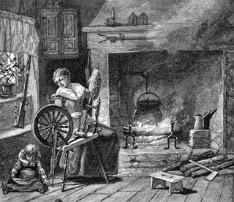 All references to the Women’s Rights Movement in the United States begin with the First Women’s Rights Convention in 1848. I think that is wrong. I believe the movement began long before that. In fact, I believe it began the moment Mary Chilton set foot on Plymouth Rock.

History’s Forgotten Women
What about the Women on the Mayflower? Were these not brave women? Did they not brave the uncertainties of the New World—never knowing what dangers they would encounter? Did they not play a vital role in building the New England Colonies? Did they not work alongside the men to create this great country of ours?

Why have women been left out of history? Were men that frightened to allow women to enjoy basic human rights? Were they afraid that women would usurp their power? That women would take control and make a mess of things? I just do not get it!

In the American Colonies, women were taught to read so they could read the Bible. They were rarely taught to write their own names. Unless they had strong mothers and enlightened fathers, that was the extent of their education. Many people believed that women were feeble-minded, and incapable of learning beyond the basics.

We have Pilgrim Fathers, but no Pilgrim Mothers. We have Fathers of our Country, but no Mothers. Until recent times, historians have been male, and they obviously made a conscious effort to omit women from history.

Women’s Rights in the Early Seventeenth Century
In early colonial society, women had no standing in the eyes of the law. They could not vote or hold any office in government. Women had no political rights and were without political representation. Women often could not speak out, their husbands spoke for them. Men virtually owned their wives as they did their material possessions. Their homes and their children were not theirs. They belonged to their husbands.

Property Rights
Property rights included the legal rights to acquire, own, sell and transfer property, to collect and keep rents, to keep one’s wages, to make contracts and bring lawsuits—provided she was unmarried. The moment she said “I do,” all of those rights passed to her husband. She became one with him, and basically ceased to exist.

Widows Had Many Rights
Many widows consciously chose to remain single after the deaths of their husbands, although there was intense social pressure to remarry. Legally, married women were regarded as representatives of their husbands, but widows were recognized as agents in their own right. A widow could inherit her deceased husband’s property, run his business, keep her wages, buy and sell property, collect and keep rents, and file lawsuits—provided she was smart enough to remain unmarried.

I ask you, were these brave women not fighting for their rights?

… shall enjoy all the rest of her lands and all of them to whom she hath already at any time heretofore disposed any part thereof by gift, sale or otherwise, or shall hereafter do the same, to them and their heirs for ever without any trouble or molestation.

I believe it is likely that Elizabeth remained a widow so she did not have to give up her rights.

Anne Marbury Hutchinson fought for the right to worship as she chose and to voice her opinions at religious meetings her own home. She made the mistake of criticizing the Puritan ministers of Massachusetts Bay Colony. For that sin, she was put on trial for heresy, becoming the first female defendant in a Massachusetts court. She defended herself admirably—no man was brave enough to speak up for her—but in the end she was excommunicated from the Puritan church, and banished from the Colony.

Anne Dudley Bradstreet was unusually well educated for her time—tutored in history, several languages, and literature. Her husband held several government positions, and his political duties involved traveling to other colonies. Anne spent her lonely days and nights reading her father’s collection of books and educating her children. In the process, she learned a great deal about religion, science, history, the arts, and medicine.

She was particularly fond of poetry, and she began to write some verse, but kept her work a secret. The Puritans frowned upon women who stepped out of their place in society. Her writing suggests that she believed that the search for knowledge was against God’s will, and that women should be relegated to traditional roles. Yet she continued to read and learn.

She clearly valued knowledge, and could well be considered an early feminist. She was the first American poet, and her first collection of poems was the first book written by a woman to be published in the United States. Her work serves as a testament to the struggles of a Puritan wife against the hardships of New England colonial life.

Mary Barrett Dyer
Mary’s husband, William, appears to have been more tolerant of his wife than most Puritan men. The Dyers became early supporters of Anne Marbury Hutchinson. When Anne was excommunicated, Mary Dyer walked out of the church with her. When Hutchinson was banished from Massachusetts Bay Colony in 1638, the Dyers followed Anne to Rhode Island. They helped to found the new colony at Providence, which was founded on the principle of religious freedom.

The Dyers later became Quakers and returned to Massachusetts Bay Colony. The governor there was extremely intolerant of religious dissention. He wanted only one religion in the Colony—Puritanism. Mary was arrested and banished from the Colony, but she always returned, hoping to gain converts to her new religion. She paid the supreme sacrifice on June 1, 1660, when she was hanged by the neck until dead.

Women’s Rights Movement?
So, maybe these few women are just not enough to constitute a women’s rights movement, but there must be hundreds, maybe thousands, we know nothing about. They were building a country, giving birth to dozens of children, raising food to feed to their families, and untold other backbreaking work.

They did not have time to record their daily lives. They were too busy caring for others. Though I wish they had been able to tell us more about themselves, I value highly what they left behind. They inspire me, and make writing this blog very rewarding.