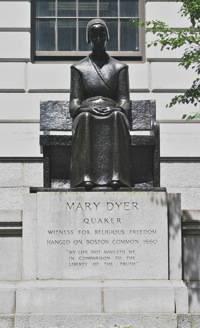 Mary Barrett was born in 1610 in London, England. In St. Martin-in-the-Fields, London, on October 27, 1633, Mary married William Dyer, a milliner and a Puritan. Mary and William emigrated from England to the Massachusetts Bay Colony in 1635. They settled in Boston, and on December 13, 1635, they were admitted to the Boston church. They were numbered among the intelligent citizens, being above the average in education and culture. William became a freeman of the Colony in 1636, and he held many positions of public importance.

Banished from Massachusetts Bay Colony
The Dyers became early supporters of Anne Marbury Hutchinson. When Anne was excommunicated, Mary Dyer walked out of the church with her. When Hutchinson was banished from Massachusetts Bay Colony in 1638, the Dyers followed her to Rhode Island, a colony founded on the principle of religious freedom. They helped to found the new colony at Providence.

Quaker Beliefs
In 1650, William and Mary Dyer returned to England, where they became Quakers. The Quakers were comparatively unknown. Its founder George Fox saw “a great people to be gathered” which included Puritans, Separatists and Seekers. These were people looking for a spiritual religion, rather than the religion of conformity which was insisted upon by the English monarchy.

Quakerism emphasized human goodness because of a belief that something of God exists in everyone. It also recognized the presence of human evil, and worked to eradicate it. Quakerism became a way of life. Friends, as they would be called, placed great emphasis upon living in accord with Christian principles. They avoided luxury and emphasized simplicity in dress, manners and speech. Until late in the 19th century, they retained certain forms of speech known as plain speech, which employed thee instead of you.

No distinction was made between the sexes. Membership qualifications were based on moral and religious grounds, and on the readiness of the candidate to realize and accept the obligations of membership. Meetings for worship were held once or twice a week, and were intended to help members feel God’s presence as a guiding spirit in their lives.

Return to New England
Mary’s first attempt to return to Boston as a Quaker in 1657 was ill-timed. John Endicott had succeeded John Winthrop as Governor in 1649, and he was far more intolerant of religious dissention. He feared that if he permitted the Quakers to express their views in Massachusetts Bay Colony, they would totally undermine the Church-State partnership. The Puritans wanted only one religion in the colony – Puritanism.

The Boston General Court felt that Quaker doctrine assaulted the “fundamental truths” of religion. The Quaker belief in the “inner light” as the primary basis of revelation ran against the grain of Puritan dogma, with its scripturally-based relationships of master/slave, king/subject and father/family.

Mary Dyer was arrested and thrown in prison. At her trial before Governor Endicott, he said, “we have made many laws and endeavored in several ways to keep you [Quakers] from among us, but neither whipping nor imprisonment, nor cutting off ears, nor banishment upon pain of death, will keep you from among us. We desire not your death.”

Only by the steadfast entreaties of her husband was Mary released on the stipulation that she immediately be removed from the Colony, under guard, and being allowed to speak to no one during the journey.

A law was then passed, levying a fine of 100 pounds for bringing a Quaker into the colony, and two pounds per hour for concealing or harboring a Quaker. Any Quaker who returned from banishment was to lose an ear each of the first two times he returned, and to have his tongue bored through with a hot iron the third time. The following year, it was made a capital offense.

A Quaker Martyr
In September of 1659, Mary Dyer returned, knowing full well her peril, but with equal intent to look the bloody laws in the face. She was immediately apprehended by the authorities. On October 20, she was brought before the Court of Magistrates, with Endicott presiding, and she was sentenced to be hanged.

Despite all entreaties of her family to recant, Mary would not. On October 27, 1659 the high-sheriff exhibited his warrant, called for her, and had her irons knocked off. Surrounded by guards and a “great multitude,” she proceeded to the gallows. She was placed on the scaffold, and the noose was fastened about her neck.

Suddenly a voice cried out. “Stop! She is reprieved!” Conducted back to prison, where her son anxiously awaited her return, Mary learned that his entreaties had saved her. Her sentence was commuted to banishment with the solemn warning that should she again offend the law the extreme penalty would surely be exacted.

But Mary once again chose to disobey and returned to the “bloody town of Boston” in May 1660. She again was arrested and sentenced to be hanged, but was offered her life if she would promise to leave the colony and not return. She refused, and said, as she walked to the scaffold:

This is to me the hour of greatest joy I ever had in this world. No ear can hear, no tongue can utter, and no heart can understand the sweet incomes and the refreshings of the spirit of the Lord, which I now feel.

The hanging of Mary Dyer on the Boston gallows in 1660 marked the beginning of the end of the Puritan theocracy and New England independence from English rule. A year later King Charles explicitly forbade Massachusetts from executing anyone merely for professing Quakerism. In 1686 England revoked the Massachusetts charter, sent over a royal governor to enforce English laws, and then in 1689 passed a broad Toleration act.