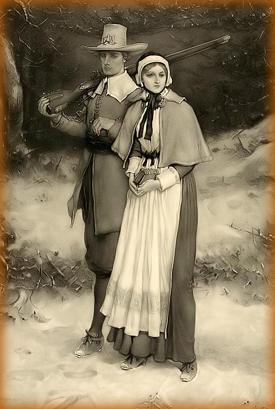 There is so much made of the Pilgrim Fathers of Plymouth Colony, but what about the Pilgrim Mothers? Those brave women are only mentioned in conjunction with their husbands and their children. Their lives are seen only in brief glimpses. The women themselves are almost invisible.

Plymouth Colony Life
The Pilgrims continued to follow the laws of England concerning females, marriage and the family. They brought with them traditional attitudes about the proper status and roles of women. Women were considered to be the “weaker vessels,” not as strong physically or mentally as men, and less emotionally stable.

Pilgrim women lived in a society that believed that women were created by God for man’s benefit, and for him to subjugate. They had no say in political decisions, could not vote or participate in town meetings. Women could not talk in church or interpret scripture, and they had to keep their heads covered with a coif, hat or bonnet while in public.

The wife was required to be submissive to her husband, and to obey his lawful commandments. She was to be mild, obedient and courteous, to dress and behave modestly. The wife was required to dwell with her husband wherever he chose to live. If he needed to reside in a place not fitting for his wife, then she must live where he placed her and come to him whenever he required.

Marriage was considered the normal state for all adult residents of the colony. Most men married in their mid-twenties and women at about age twenty. Within the confines of marriage, women and men were never considered equal. But compared to 17th century European norms, women in Plymouth Colony had more rights, legally and socially.

A woman in Plymouth Colony was allowed to be a party to contracts, especially prenuptial agreements. It was common for a bride-to-be to enter into an agreement concerning the disposition of property after marriage.

A wife could not be legally “written out” of her husband’s will. She was guaranteed one-third of the husband’s property upon his death. And in a second marriage, a woman was given the exclusive right to retain control of the property she brought to the marriage, separately from her husband.

Heavy Labor
A woman could expect to be pregnant or nursing for most of her reproductive years. A New England woman averaged seven births—but eight or ten were not uncommon. Childbirth was a fearful time, usually attended by midwives and neighbor women. The risk of death during childbirth was as high as one in eight.

Limiting the number of children was an issue not easily solved, and it was important to have many children to help populate the new colony. But a Pilgrim woman would suffer the loss of many of her children before their first birthday. To the men in early America, motherhood was a Godly thing. The ability to create life was one of the few instances where a woman was recognized as superior.

Almost everything a family used or ate was prepared at home under the woman’s direction. She made butter, cheese, soap and candles. She preserved meat and vegetables, spun and wove cloth and made it into clothing, took care of chickens and dairy cattle, worked the vegetable garden, kept the fire going—the woman of the house produced a significant share of the necessities of life.

Girls were taught housewifery by their mothers. They learned to grind corn, barley and wheat into flour, then to measure flour in their hands for baking bread. They also learned how to cook outdoors, how to scour, scald and cook meats, to dry fish, and how to use herbs for cooking and medicinal purposes.

Freedom in the New World
The demands of the New World allowed colonial women more freedom than was often unavailable to women of later generations. The belief in female inferiority was minimized by the conditions. Every set of hands was essential to the building of a new settlement.

A husband could discipline his wife, just as he could discipline his children. The Pilgrims’ pastor John Robinson argued that beating a wife for discipline was not appropriate or productive (although not illegal, nor condemned). To deal with a wife who did not properly submit to her husband’s authority, he recommended other disciplinary measures, such as taking away certain privileges.

But if the wife was visibly injured, the General Court—the ruling body in Plymouth Colony—could punish him. And the matter went to trial with or without the woman’s cooperation. If found guilty, the husband could be fined and whipped publicly.

As long as the colonies remained relatively undeveloped, women enjoyed a limited kind of independence.