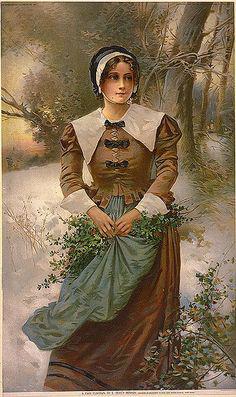 Priscilla Mullins, it is believed, was born in or near Dorking, Surrey, England, and that she was in her teens in 1620 when she, her parents and her brother Joseph came to America on the Mayflower. Her parents and her brother died in the sickness that took so many lives during the first winter at Plymouth Colony, leaving her orphaned. Priscilla probably then moved in with the Brewster family.

Priscilla was one of the surviving women, who became a family, bound together by common needs and sorrows. It can be surmised that she grew close to the other young members of the colony, and possibly to John Alden.

John Alden was hired as a cooper—a barrel maker—to take care of the barrels aboard the Mayflower when it set sail for the New World in the early fall of 1620. After his contract was up, he decided to remain in New England when the Mayflower returned home to England.

Priscilla is probably the best known woman who sailed to America on the Mayflower, because of the poem The Courtship of Miles Standish by Henry Wadsworth Longfellow. According to Longfellow’s legend, John Alden spoke to Priscilla Mullins on behalf of Miles Standish, who was interested in the lovely young woman. But she asked, “Why don’t you speak for yourself, John?”

Priscilla Mullins married John Alden certainly by 1623, because she is not listed separately in the 1623 Division of Land at Plymouth Colony. Each man drew lots to determine the location of his land. John Alden’s grant was “on the other side of the bay” from the original Plymouth settlement.

Not much is known about their early married life, but records show that by 1627 they were living in a house on the hillside, across from the Governor’s house and near the fort. John Alden served in various offices in the government of the Colony. He was elected as assistant to the governor and Plymouth Court as early as 1631, and was regularly re-elected throughout the 1630s.

At first, the colonists only planted crops on the land given them at the Division of Land. But by 1632, John Alden and others wanted to stay on their new land year round, and Plymouth Colony reluctantly agreed. There, the Aldens helped to found the town of Duxbury, and raised their ten children.

Alden served as Duxbury’s deputy to the Plymouth Court throughout the 1640s. In the 1650s, he built a large house for his family in Duxbury, which still stands today. In the 1660s, the Plymouth Court provided him a number of land grants and cash grants to better provide for his family. Throughout the 1670s, Alden began distributing his land holdings to his surviving sons.

Virtually nothing else is known of Priscilla’s later life. The date of her death is unknown. John died in 1687 at the age of 89, one of the last surviving Mayflower passengers.