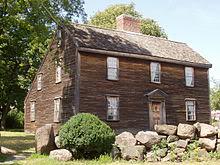 Susanna Boylston born March 5, 1708, in Brookline, Massachusetts, to Peter and Ann White Boylston, was an early-American socialite, who came from a prominent family of scientists and medical doctors. She is among the least well known of the famous Adams family, for her name appears infrequently in the large body of Adams writings. However, her son’s diary reveals that she had a fiery temper.

In 1720, Adams, Sr. purchased a farm in Braintree (now Quincy), Massachusetts, and lived there until his death. The future President lived here with his parents until 1764, when he married Abigail Smith. This saltbox house, characterized by the sloping roof, is where the Adams sons were born, and is now part of Adams National Historical Park, which is operated by the National Park Service and is open to the public. It is a few feet from the John Quincy Adams Birthplace.

John Adams, Sr. was born on February 8, 1691, and worked as a farmer and shoemaker for most of his life. He was a fifth-generation descendant of Henry Adams, who emigrated from Braintree, Essex, England to Massachusetts Bay Colony in about 1638. He was also descended from John and Priscilla Alden, and was first cousin of patriot Samuel Adams. Adams, Sr. was well thought of in the community.

Susanna Boylston married John Adams, Sr. on November 23, 1734, and had three children:
John Adams – Patriot and Founding Father of the United States of America.
Peter Boylston Adams – A farmer and militia captain of Braintree, Massachusetts.
Elihu Adams – A company commander in the militia during the American Revolution.

Adams was also a Puritan deacon in his church, a lieutenant in the Massachusetts colonial militia, a tax collector, and a selectman of the Town of Braintree. As a selectman, or town councilman, he supervised the poor house, schools and roads.

Adams, Sr. bequeathed his son the ‘humble notions of equality and fairness.’ He was a strict father who appears to have believed in patriarchy. He raised his sons to join the militia, and would rap out reveille on his kitchen table. Like many families of the day, he homeschooled his sons. He expected John the younger to become a minister, fearing that his son would become a mere farmer as he had been, and knew how difficult a life it was. He pressed his son to live up to his high Puritan origins, which young John continued to strive towards for the rest of his life.

Adams had attended Harvard College, and sent the future president there as well. While deciding on a profession, Adams, Jr. taught at a grammar school in Worcester. His family however, thought that by sending him to college he would become a clergyman, but Adams found he was a ‘free thinker,’ and thus was not at home in the pulpit. He turned from the ministry and studied law at Worcester, and in 1758 opened his own practice in Suffolk County.

Five years after the death of her first husband, Susanna married Lt. John Hall, who apparently did not get along with her grown children.

Susanna Boylston Adams died April 17, 1797, at Quincy, Massachusetts, at the age of 89, during the first year of her son’s presidency. She was also the grandmother of the sixth President, John Quincy Adams.